The Irish and the Godfather Mario Puzo

Did you know that one of the greatest movies in cinematic history would never exist if a couple of Irish killers had better aim? 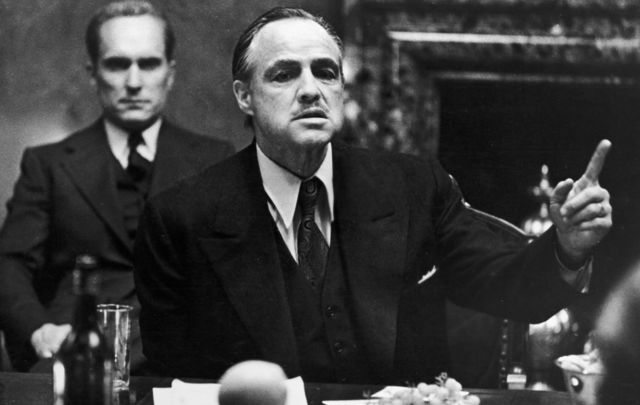 Marlon Brando, as Don Corleone, in the movie version of Mario Puzo's novel "The Godfather". Getty

Did you know that one of the greatest movies in cinematic history would have never existed if a couple of Irish killers had only had better aim?

It goes like this.  Fifty years ago, a writer named Mario Puzo was considered a great talent, and not much else, because his novel The Fortunate Pilgrim hadn’t sold well.  An editor suggested the Italian American author write something that leaned more towards organized crime. Which is a little like telling an Irish American to write more about drunks and priests?

Read more: "The Irishman" is the best film of Martin Scorsese's career

But a paycheck is a paycheck. In 1969, Puzo published a little book called The Godfather.

There is a scene in the book that is not in the movie which the American Film Institute has judged the second best movie ever made, bested only by Orson Welles’ Citizen Kane.

Early in Don Corleone’s career, he is pondering how to make a move from struggling family man to underworld kingpin.

Corleone understands that he can’t simply whack all of the big boys.  These “five or six families” were “too powerful to eliminate.”

But he could target the various underlings who fed off the scraps the big families tossed aside.  “The neighborhood Black Hand terrorists, the freelance shylocks, the strong-arm bookmakers, operating without the proper, that is to say paid, protection of the legal authorities, would have to go,” Puzo writes.

And so, Corleone “mounted what was in effect a colonial war against these people and threw all the resources of the Corleone organization against them.”

Oh, but things almost went very bad for The Godfather.

“A group of mad-dog Irish stick up artists the Don had marked for extermination almost carried the day with Emerald Isle elan,” Puzo writes.  “By chance, and with suicidal bravery, one of these Irish gunmen pierced the Don’s protective cordon and put a shot into his chest. The assassin was immediately riddled with bullets.”

Imagine if the Irish “assassin” had hit his mark.  Don Corleone would have been cut down before he could cut off any horse’s heads, before he could make any offers folks simply could not refuse.

Chris Cuomo referred to as Freddo

Anyway, The Godfather remains deeply relevant.  Just last month, CNN news anchor Chris Cuomo was at the center of an odd kerfuffle when a street heckler dared to call him Fredo, a reference to one of Corleone’s, um, more feckless sons.

“Punk a** b*****s from the right call me Fredo,” Cuomo said in a video of the incident. “My name is Chris Cuomo. I’m an anchor on CNN. Fredo is from The Godfather. He was a weak brother. And they’re using it as an Italian aspersion.

Safe to say a nerve had been touched.  But there is a bigger lesson in this bizarre age of ours.

On the one hand, in 2019, there is an obsession with race and ethnicity that borders on the fetishistic.  On the other hand, certain ethnicities are clearly more interesting, cool, and exotic than others.

A few weeks later, the highly enlightened New York Times decided to take a deeper look at the intricacies of the Cuomo/Fredo episode.

“For somebody like Chris Cuomo,” Alex Norcia wrote many paragraphs into a Times magazine think piece, “a man born in the three years between the publication of The Godfather as a best-selling novel and its release as a blockbuster film, (Fredo) can be a very real jab.”

Ya think?  It’s as if the Times -- having spilled gallons of ink proving how “woke” they are when it comes to microaggressions of all sorts thrust upon this or that marginalized cultural group -- just discovered that such things might also apply to the children and grandchildren on Ellis Island immigrants from Italy, Ireland, Poland, or elsewhere.

Maybe if they’d figured these things out earlier we wouldn’t have so many grandchildren of immigrants voting for an anti-immigrant president.

Read more: Was Marilyn Monroe killed over this JFK secret?