On This Day: The Edmund Fitzgerald ship sank killing 29 people in 1975

How the fatal sinking of The SS Edmund Fitzgerald inspired Irish singer Christy Moore's recording of his iconic ballad "Back Home in Derry." 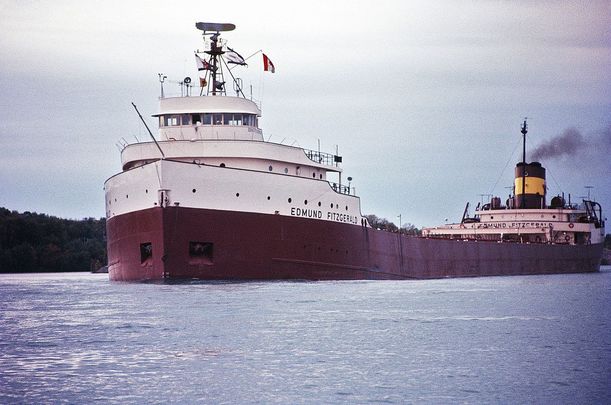 The SS Edmund Fitzgerald sank Lake Superior nearly 47 years ago. A freighter that had been in service for 17 years, the ship went down on the night of November 10, 1975, killing all 29 of the crewmembers on board.

I hadn't thought about that tragedy in years. For whatever reason, I wanted to know who was Edmund Fitzgerald, after whom the steamer was named. I found a nice little summary about Fitzgerald and his family's roots on a site called Lake Huron Lore (overlooking the fact that the Edmund Fitzgerald sank on Lake Superior).

Three of those sons moved to Milwaukee in the 1850s and each took up different roles in sailing and shipping. John, Edmund's grandfather, became a shipbuilder. John's son William took over the business in the 1890s. Young Edmund believed he'd also work in shipbuilding, but his father died when he was only six years old and life took him in a different direction, although he never lost his love for and interest in shipping and the lakes.

Although Edmund didn't want the freighter named after him, his wife and the board of the insurance company made it happen because they knew what it would mean to a man with such a strong family connection to shipping on the Great Lakes. Edmund declared that the launch of the Edmund Fitzgerald was a great day for all the Fitzgeralds.

Edmund Fitzgerald died in 1986 "still deeply saddened by the wreck of the ship named for him."

The ship had other Irish connections, too - both before and after it sank. Among the crew members who perished were men with names such as Rafferty, O’Brien, and McCarthy. The ship’s captain was named Ernest McSorley.

What's more, as Tom Deignan wrote in IrishCentral's sister publication Irish America magazine for the 35th anniversary of the sinking in 2010, "Just months after the 'Mighty Fitz' sank, Canadian-born singer-songwriter Gordon Lightfoot penned the epic ballad 'The Wreck of the Edmund Fitzgerald,' which became a massive hit on US radio and across North America.  The song – which tells of 'that good ship and true' as a 'bone to be chewed / when the Gales of November came early' – ended up spending over 20 weeks on the US charts.

"The song proved so evocative that Irish singer-songwriter Christy Moore used Lightfoot’s melody when he recorded the song 'Back Home in Derry' – with lyrics by Bobby Sands – just three years after the international outcry over the hunger strikes that made Sands an international icon."

“The Wreck of the Edmund Fitzgerald”

“Back Home in Derry”