Ireland and the Wabanaki - colonial parallels

Hugh J. Curran looks at the compelling parallels between Ireland and the Wabanaki of Maine and the Maritimes. 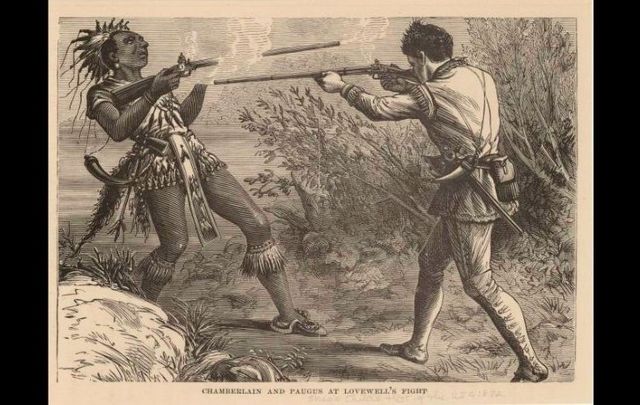 The death of Chief Pagus at the Battle of Pequawket in 1725 during Father Rale's War. The battle was the last major engagement between the English and the Wabanaki Confederacy in Governor Dummer's War. Public Domain

The first colonial settlers arrived in New England at about the same time as they arrived in Ireland.

These settler-colonialists (planters) expropriated a half-million acres of arable land under the conviction that Ireland needed to be anglicized, civilized and controlled. In doing this, the English colonists began a century of conflict as they attempted to supplant the Indigenous Gaelic inhabitants.

Four decades later, the infamous Oliver Cromwell invaded with an army and confiscated large swathes of territory for his soldiers and supporters. An estimated 40% of the Irish population died from famine and disease brought on by war, (600,000 out of 1.4 million, according to a 17th century English economist). Fifty thousand were sent to the West Indies as indentured servants, while the majority of Irish farmers became tenants at will under Anglo-Irish landowners.

The devastation of war throughout the 17th century ended with William of Orange’s defeat of King James at the Battle of the Boyne resulting in 90% of Irish land being appropriated and this state of affairs continued for 250 years until Ireland gained  Independence in 1922. This disestablishment of indigenous people from their land and culture became a pattern repeated in North America, Australia, and New Zealand, all of it supposedly justified by the “Doctrine of Discovery”, which made it a presumption of rights of sovereignty over “discovered” lands.

Maria Edgeworth’s book “Castle Rackrent”, written in the early 1800s, revealed the stark acquisitive nature of an Anglo-Irish culture built on wealth disparities. The poet WB Yeats considered the book one of "the most inspired chronicles written in English”.

The parallels between Ireland and the Wabanaki of Maine and the Maritimes are compelling. The English settlers who came into America devastated Native populations, not only by militarism, but as the result of widespread infections brought about by diseases such as measles, typhus, TB, and smallpox resulting in a 90% mortality rate. Jared Diamond, in "Guns, Germs, Steel," noted that such diseases were first brought by explorers in the 1500s, then spread throughout the continent. The causes were a lack of large domestic animals which helped provide immunity in Europe. A researcher noted that: "Contrary to popular belief, it was not the European guns or soldiers that conquered Native Americans, but instead it was the epidemics diseases brought from the Old World by the Europeans…diseases such as smallpox, measles, and typhus annihilated most of the American native populations."

Despite these destructive diseases, the strength and resilience of the Wabanaki to survive are highly admirable. They continue to show their long-held concern for the environment, which in the past, fostered a sacred trust that helped protect the waterways and coastal regions for thousands of years.

Over the last few centuries, the Wabanaki, as well as other Indigenous tribes, have seen the diminishment of Indigenous Rights as a result of the Doctrine of Discovery which was adopted in Canada, Australia, and New Zealand.

The 1980 Indian Land Claims Settlement Act exemplified this tendency by extinguishing all aboriginal title to Wabanaki land in exchange for a monetary settlement. As stated in a BDN editorial in February 2020: “…the Maine Indian Claims Settlement Act means that tribes in Maine are treated differently and have different rights than all the other tribes in the United States. In Maine, the tribes are essentially treated as municipalities …They have far less autonomy over issues, such as gaming, criminal justice, and taxation, than other federally recognized tribes in the US.”

Negative attitudes. rooted in old prejudices, are deeply embedded and they continue to affect policies relating to Native Americans. Prior to WWII, scientific racism and white supremacist mythology were popularized by such writers as the eugenicist Madison Grant. His book “The Passing of the Great Race” was based on a long-held fiction that the “Nordics” (North and West Europeans) possessed inherent superiority over others and that “inferior races” should be rejected while “undesirables” must be sterilized. Modern genetic studies have debunked these beliefs, showing that all humans have similar intellectual capacities, and given the right circumstances, are able to attain equal levels of success.

White Americans continue to exercise control over the forests and rivers, lakes, and mountains of Maine, but it is now high time for residents of Maine to practice co-existence with Wabanaki people in what is historically Wabanaki territory, and to do this in a spirit of cooperation rather than of competition, and reciprocity rather than relationships based on power and dominance.

Recently, the Maine legislature has considered a new legislative bill LD1626 which could potentially return the right of sovereignty to the Wabanaki, but it has been tabled.

More than a decade ago, the Maine Legislature issued a joint resolution concerning the U.N. Declaration on the Rights of Indigenous Peoples: “Indigenous peoples have the right to own, use, develop, and control the lands, territories, and resources that they possess by reason of traditional ownership or other traditional occupation or use, as well as those which they have otherwise acquired.” This would go a long way to overcoming the pernicious effects of the Doctrine of Discovery, which still seems to be embedded in the collective consciousness of many people. Passing this bill will provide an opportunity to help atone for past wrongs.

*This article was submitted to IrishCentral by Hugh J. Curran, who was born in Killybegs, Donegal and now teaches in Peace and Reconciliation Studies at the University of Maine in Orono, Maine.