The “IRA Cardinal” who changed the North of Ireland forever

An outspoken human rights supporter, Cardinal Tomas O Fiaich was hated by the British and trusted like no other cleric by Irish nationalists. 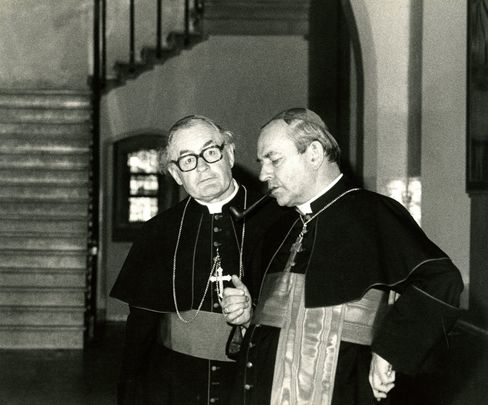 Bishops Kevin McNamara and Cardinal Tomas O Fiaich(R) at a press conference after a Bishops meeting in Maynooth. RollingNews

Cardinal Tomás Ó Fiaich was an outspoken human rights supporter, hated by the British, and trusted like no other cleric by Irish nationalists.

Cardinal Tomas O Fiaich, or “Father Tom” as supporters called him, was head of the Catholic Church in Ireland as Cardinal Archbishop of Armagh when he died in May 1990.

Fiercely outspoken on human rights and anti-Catholic discrimination, he was loathed by the British and many leading Protestant clergies but trusted like no other cleric by Irish nationalists on whose behalf he spoke out fearlessly.

British tabloids hated O Fiaich and he was often referred to as the IRA’s cardinal. This article from one of Ireland’s top journalists, John Cooney, covers the massive fallout when O Fiaich made comments favorable on a United Ireland saying it was inevitable during a 1985 visit to America.

One of the most bizarre press conferences which I attended in the course of my half-century in journalism involved stormy denunciations by Protestant Church leaders of a call during a 1985 visit to America for a British Army withdrawal from Ireland by Cardinal Tomás Ó Fiaich, who died, aged 66, thirty years ago today, (May 8, 1990).

On March 9, 1985, Brendan Mallon had reported from Boston in a front-page story in the Irish Press that Cardinal Ó Fiaich told a press conference that the reunification of Ireland was “inevitable” and that the only solution to end violence in Northern Ireland was a British withdrawal. “As long as partition is there,” he was reported as saying, “you will have an opposing and angry minority.”

Five days later Cardinal Ó Fiaich returned to Dublin from Boston and was driven by his chauffeur straight to the Ballymascanlon Hotel, County Louth, close to the border between the North and the Republic of Ireland for a church unity conference with Protestant leaders.

The Presbyterian Moderator, Dr. Howard Cromie, the Anglican Church of Ireland Primate, Dr. John Armstrong, and the President of the Methodist Conference, the Rev Paul Kingston, had called the press conference to announce that on the following Sunday, St Patrick’s Day, they would pray together with the Cardinal at a service in Down Cathedral, Downpatrick. This was to be the first time that the leaders of the main denominations would worship together on St Patrick’s Day.

However, the Protestant Church chiefs were far from being in an ecumenical frame of mind, and the large media presence from both sides of the border anticipated a showdown between them and a jet-lagged but unrepentant Primate of All Ireland.

After opening courtesies, Dr. Cromie denounced Cardinal Ó Fiaich’s call for the withdrawal of the British Army from the North and its replacement by United Nations troops as “a calculated insult” to the people of Northern Ireland who wished to remain British.

Dr. Cromie also argued that the Cardinal’s views showed “a shocking misunderstanding of how Protestant people think” and could not be interpreted in any other way than giving comfort to terrorism, as the withdrawal of Britain from Northern Ireland was the objective of the IRA.

The Cardinal replied that he resented any charge that his Boston speech gave aid or succor to violence. He was, he insisted, on the record as having condemned IRA violence as well as that by the security forces and Protestant paramilitaries.

He suggested some spokespersons on the Protestant side had overreacted to his comments. Asked about a report which claimed that he had said in Boston that Catholics would “outbreed” the Protestants of Northern Ireland and make unification inevitable, he said he had never used the word “outbreed” and as a historian, he knew nothing was inevitable in history.

However, he agreed that he had drawn attention to the fact that in recent years the number of Catholic births was slightly more than 50 percent of all registered births in Northern Ireland, and he had noted that some experts claimed this trend would continue. He was aware that there were a whole lot of other factors involved.

Asked if a sudden British pull-out would not mean civil war Cardinal Ó Fiaich said British withdrawal should be accomplished in a gradual and orderly way. He felt the danger of civil war was exaggerated, however. As long as the British military presence is there, it provides a special element of divisiveness. Protestants identify with the British presence and the Catholics are against it”, he affirmed.

Cardinal Ó Fiaich said the first requirement was a British announcement that they do not intend to stay in Ireland for all time as a substitute for the present policy of backing an artificially created Protestant majority. “They should see Northern Ireland as a hangover from the colonial situation they had got away from all over the world.”

This explanation did not calm tempers and the press conference stretched for an hour. The temperature soared as one Protestant churchman after another attacked the Cardinal even making the collective claim that “Cardinal Ó Fiaich’s words contain the seeds of religious conflict and could easily end in civil war”.

Such was the animosity against the Cardinal, too, from journalists from the North that I sensed that a concerted “gang-bang” was being orchestrated by the Protestant Church leaders.

I had traveled to Ballymascanlon for the press conference for the Irish Times along with T. P. O’Mahony of the Irish Press and Joseph Power of the Irish Independent. I recall looking at Tom and Joe, who clearly shared this perception. So we decided to bat for the Cardinal, a maneuver which Tomas recognized as he relaxed by lighting up with his pipe.

At the press conference, the Moderator had begun by saying that he was deeply saddened by a recent statement from Cardinal Ó Fiaich which could only result in “incalculable damage” to community relations throughout Northern Ireland. “Cardinal Ó Fiaich’s utterances are bound to lead to bitterness and distrust not only among Protestants but also among law-abiding Roman Catholics. The fact of the matter is that his statements issued this week have created more divisions among church leaders than has been experienced since the Troubles began.

“To call for “a British withdrawal” from Northern Ireland can only be regarded as a call for the withdrawal of all those who regard themselves as British. It would be naïve to suggest that all that is meant is a withdrawal of cross-Channel military presence. The fact is there are one million people in this Province who would still defend their right to be British and would not be browbeaten against their will into a united Ireland Republic. The call for the introduction of a United Nations peace-keeping force can only be regarded as a calculated insult against our own security forces.”

Cardinal Ó Fiaich, who made his original remarks when he was in the US to collect five million dollars for a new John Paul II Library at St Patrick’s College, Maynooth, told reporters that the 40 million Irish-Americans would have to balance up their prayers with cash to help the college. He had added that he was less optimistic about peace in the North than at any time in the past. He again condemned the use of violence to effect political change but pointed out that many Irish-Americans seemed to think that all the violence derived from the IRA. The British Forces in Northern Ireland, he maintained, had been more than responsible for their share of the violence there.

Attending a dinner with Cardinal Ó Fiaich was Bishop Thomas Joseph Drury, from Ballymote, County Sligo, who was former Bishop of Corpus Christi diocese, Texas. Bishop Drury was reported as having called on the Irish Government of Garret FitzGerald to mind its own business and stop meddling in US affairs. He said Ireland was the only country to meddle in the activities of its expatriates.

The fall out from the US speech at the alleged ecumenical meeting was profound.

So heated was the hour-long criticism of the Cardinal by the Moderator that Dr. Armstrong closed the press conference pointedly saying that he had come to Ballymascanlon to talk about prayer but had witnessed the media turn the press conference into “a political wrangle”.

This was obviously meant to be a flippant criticism of journalists. But as far as we were concerned the press conference highlighted the deep differences of opinion among the Church leaders and revealed the fragile nature of ecumenism in Ireland. It appeared not to have dawned on the Protestant leaders that they themselves were being political in accusing the Cardinal of being political! In the end history, of course, would prove O Fiaich right about the rising tide of Irish nationalism. His remarks in the US were prophetic.