Mary Catherine Brouder describes Ireland as a "little slice of literary heaven" especially when it comes to Irish people's clever turns of phrase. 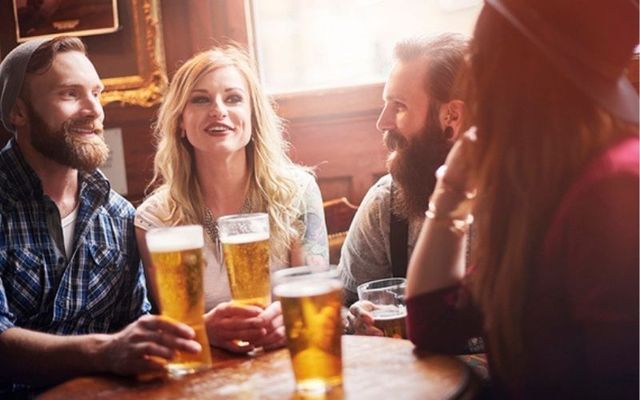 How the Irish have a way with words iStock

Irish people use some of the most clever turns of phrases I’ve ever heard.

For a venue lacking in size, there’s “You couldn’t swing a cat in here.” To describe a sweet-talker, one might say, “He could talk the hind legs off a donkey.”

A place lacking in light? “It’s as dark as a bag in here.” And, of course, there’s the classic: “He had about as much personality as a piece of wet lettuce.”

For a writer, Ireland is a little slice of literary heaven. People use creative terms that bubble over with energy and beautiful imagery on a daily basis, almost (incomprehensibly) without even thinking about it.

Recently, I had lunch with my sister and our friends Aonghus and Katie, a married couple. We got to talking about the pair’s adorable dog, and to describe her affections towards him, Katie suddenly squealed, “Oh I could just eat him on toast!”

Every time I hear one of these astonishingly well-crafted little phrases, I find myself stunned and impressed. But Irish people are so used to these little works of genius that they barely even notice them.

I remember when I first came across The Hardy Bucks online series, I could hardly breathe from excessive laughing. And yet, when I showed episodes to my cousin and my Dad, two native Irish people, they sat unimpressed by the brilliantly witty conversations between the main characters.

They barely even flinched, though I was keeled over in stitches, when one character told his friend, “Shtay away from her lad, she’s as mad as a bag of spiders.”

In America, the focus is on clarity. The communication goal is usually to be clear and direct. And to try not to confuse anybody. A former journalism professor of mine once instructed my class, “Don’t use the word ‘decade’ when you can just say ten years.”

Sure, his approach was extreme, but his sentiment conveys the underlying theme of the American approach to using the English language: keep it simple. Maybe a little too simple.

I think if you went looking at an apartment in New York and told a real estate agent, “you couldn’t swing a cat in here,” the agent would probably either fall on the floor laughing or have you taken in for cruelty to animals.

For Irish people, even hardships are turned into witticisms. I’ll never forget the first time I heard a friend say, “Oh lads, I was sick as a small hospital last night.” I was so busy laughing at the phrase that I could hardly compose myself long enough to actually ask how that friend was feeling.

Another friend recently wrote to apologize for canceling on a dinner party, “I’m sorry I didn’t make it... my kidneys were acting the maggot.” The poor thing was suffering from a kidney infection, and all she did was offer a light-hearted catchphrase, and not even utter a word of complaint about the pain she most assuredly had been in. And I know that she wasn’t even trying; it was just second nature.

Sometimes, though, to be honest, the Irish penchant for euphemisms is prone to induce more than a bit of head-scratching.

Like the phrase, “the tea won’t pour itself.” Of course, it won’t. If you’re a host who hears that in an Irish house, you are supposed to understand that your guest is challenging your hospitality and that you’d better make some tea.

But if you’re an American host, unacquainted with the ways of Irish phraseology, you’d be as likely to end up seeming ever more rude, as you, missing the point entirely, ponder the thought of how, indeed, tea doesn’t pour itself. Too bad. But imagine how grand life would be if it did?

Needless to say, as an American in Ireland, I’ve spent plenty of time here being confused. But then again, in times of need, I’ve also found myself turning to those wise old Irish sayings we hold close to our hearts.

“Don’t push the river, it flows by itself,” or “a watched kettle never boils.”

My Dad always used to quote his grandmother when we were young and advise us, “If you’re going to do something, don’t do it halfway.” Those words have guided me through tasks as minuscule as picking up dust, rather than sweeping it under the rug, to life’s more significant challenges.

If I ever feel lazy or tired, I remind myself of those words and push myself to do the best I can at whatever I set out to do.

One of my friends offered one of her favorite Irish phrases: a good beginning is half the work.

Words to live by, indeed. A good beginning can make all the difference. Maybe sometimes, a good beginning is just possessing those old Irish phrases that will be there for us when we need them, along the way.