Hoops and hoopla: US college basketball comes to Belfast 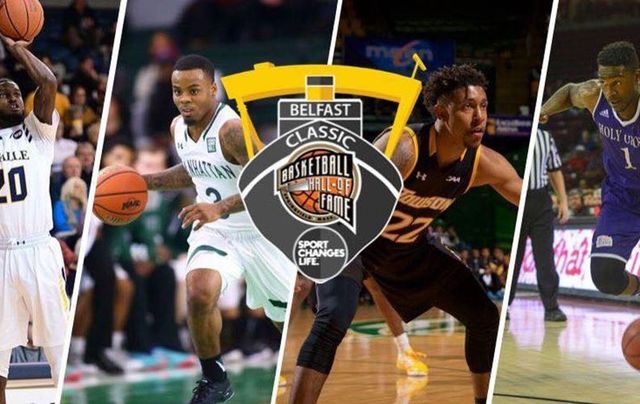 Two consecutive weekends in Belfast, two US college sporting tournaments and one certain winner: the city itself.

This weekend’s hoops’ showcase was organised by the formidable charity Sport Changes Life which in these parts is led by former basketball international Gareth Maguire. (Basketball is very much a minority sport in Ireland but the best book about its abiding allure is by American coach Rus Bradburd: Paddy on the Hardwood.)

Manhattan College in the Bronx (with a delegation which included irrepressible cheerleaders, a raucous band and unflappable college president Brennan O’Donnell!), La Salle University in Philadelphia, Towson State University in Baltimore, and Holy Cross of Massachusetts made up the competing quartet.

La Salle Explorers’ fans Kevin Davis — a recipient of the Irish Echo The Black and the Green Award in 2007— and cousins Jeanie & Meg Dougherty from Philadelphia made their first visit to Belfast for the basketball and kindly made me a gift of the unique tournament jersey.

And they put on a basketball masterclass for a packed arena where traveling fans made common cause with local fans. Only one team could emerge victorious of course – in this case, the Towson Tigers breaking Manhattan Jasper hearts in the last second to secure victory by a single point. But surely sharing the spoils was Belfast itself.

ICE IN HIS VEINS!!! @Towson_MBB's Mike Morsell hits the game-winner for the @BelfastClassic Championship! pic.twitter.com/cWlox4hXTy

Action from the Belfast Classic was screened across the US by CBS with compelling images of the city from the sky complementing the action on the court.

Belfast has been on a long journey and it’s not been without its wrong turns and cul-de-sacs but nothing represents our forward trajectory better than these international tournaments.

So hats off to Robert Fitzpatrick, who leveraged the Belfast Giants franchise to secure the BelPot, and to Gareth for his international basketball diplomacy.

But a special thank you goes to the US colleges and the college sporting authorities in America who have been tireless ambassadors for Belfast. It’s over 20 years since President Clinton turned on the Christmas tree lights outside City Hall and envisioned increasing transatlantic co-operation to build the peace. But surely even he didn’t imagine that sport would provide the winning formula for bringing our peoples together to build a better Belfast.