Joy of being home in Ireland for Christmas

"Everyone pulling together because we can, because we’re all there...That’s what makes it worth driving home for Christmas." 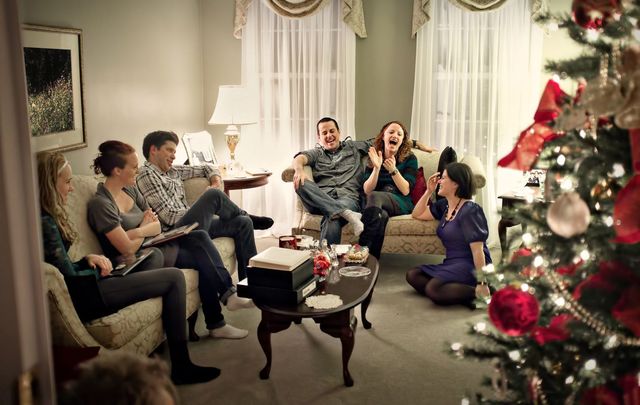 "Everyone pulling together because we can, because we’re all there...That’s what makes it worth driving home for Christmas." Getty

Every year my family and I would decorate the Christmas tree together.

Correction: my brother and I would haphazardly fling decorations at random branches while my mother frantically raced around replacing them. Uniform gold, each individual light, bauble and strand of tinsel would be arranged to absolute perfection. The tree would proudly stand in its usual corner of the living room brandishing an evenly glittering suit of gleaming gold. Psychotic perfection.

As this annual family tradition unfolded, there was always the same CD playing in the background, a typically cringe-worthy collection of Crosby’s croonings and the inescapable squawks of “Fairytale of New York”. My mother would wince as my brother and I yelled the lyrics to each with glee, but only when her favorite song came on did it ever feel like Christmas.

Over the years, Christmas in our house became known as “the C-word.” Dreaded weeks of decoration and food preparation, premature nationwide advertisements and the constant pressure of keeping everyone happy made Christmas a simultaneously happy and stressful time for many families.

As soon as the first round of “All I Want for Christmas” would make its way onto the radio waves, I could sense my mother’s resistance to the inevitable run into the holiday season.

However, there was always that one song that would brighten her mood, and give her a glow of excitement to match her freakishly golden tree. For us, it was a tedious track, one that rambled aimlessly, lacking in melody and unnecessary usage of tambourines.

“Driving Home for Christmas” by Chris Rea never struck a chord with me as it did for my mother until I moved away from home. Suddenly it all became very clear.

Read more: You know you're Irish at Christmas if...

My parents spent the majority of their twenties living in Dublin City and would commute home to Waterford every so often to visit family, to hand me over to my grandmothers and cousins, or to be at home for Christmas. My mother was the only one of her siblings to have moved away from Waterford at all, and while Dublin never felt very far away to me, it must have felt like another universe in the eighties.

Driving home for Christmas back then was a big deal, especially before all the “new roads” that we are now so very fond of, and the only way home was to meander through 5,000 tiny towns on icy, badly-lit, treacherous country roads.

Nowadays, despite having moved to Dublin on a more permanent level three years ago, my parents still drive home for Christmas. Which means my brother drives home from Dublin too. Meanwhile, I fly. And this seems to be the norm for the modern Irish family. There is always someone traveling from somewhere, whether they’re driving from Dublin to their hometown or flying from one of the many international hotspots for Irish ex-pats, be it London, New York or Australia.

This is all beautifully romanticized by that godforsaken song that has continued to haunt me every year since I first moved away from home at 18, but the reality isn’t quite so cute.

I don’t board a plane sporting a festive ensemble while carrying suitcases crammed with American treats. My brother doesn’t scamper into his car, merrily brushing the snow off the windscreen and taking in the stunning scenery en route home.

The reality begins with the crushing financial weight of attempting to afford flights home, working overtime so that you can wrangle additional vacation days to make the trip worthwhile, and scrounging pennies for the entirety of November and December so that you can MAYBE afford Christmas gifts for your nearest and dearest.

And what are you going to buy? I wrote a pretty comprehensive gift purchasing guide two years ago, and reading back on it now I laugh at myself.

What a naive young pup I was, perusing the markets at Grand Central and Union Square, compiling a carefully curated stack of treasures to fly home, each carefully wrapped with personalized notes. The days of freelancing are over, the days of having time to buy gifts have been eliminated, the concept of having time to buy anything beyond necessities that can be purchased at Target is completely insane to me.

My gift guide for 2016, a mere two years further into the dark depths of my twenties? Buy everything at Target. Done.

The biggest (literally) pressure point of going home this year is my current state of post-Thanksgiving obesity that needs to be immediately rectified before I see my family, friends and villainous ex-boyfriend, in front of whom I must look so spellbindingly ravishing that he immediately dies. That gives me 19 days to somehow transform into a Victoria’s Secret model.

At this rate, I’ll be boarding the plane looking like I moonlight in the chorus of Les Miserables and forgot to change my costume, shower or eat. Two weeks of enforced malnourishment probably won’t have quite the same stellar effect as the six months of healthy dieting and fortifying exercise that I swore I would do post-breakup, but gradually exchanged for alcoholism and carbohydrates. God bless America.

Meanwhile, my brother will probably be coming out of a 25-hour meeting, spending a further 600 hours attempting to start the car that he’s had for 7,000 years, and drinking 65 million cups of coffee to stay alert as he drives down 80 billion miles of motorway. Give or take.

The actual process of “driving home for Christmas,” by plane, train, or automobile, can make one want to simply sit on the side of the street and cry, awaiting inevitable hypothermia.

It’s what happens when you finally arrive home that makes it all worthwhile. Now that we’re big and bold, my brother and I can alleviate 90 percent of the maternal pressures of the holiday season, which makes the cooking, cleaning and general care of the household a much more communal effort.

Everyone pulling together because we can, because we’re all there. A happy mammy makes a happy Irish Christmas. That’s what makes it worth driving home for Christmas.

Are you traveling home for Christmas this year? Let us know where home is for you in the comments section, below.