Game of Thrills - An American's first-ever All Ireland Hurling Final

I'd never seen a hurling game, but I did know enough about its importance in Irish culture — one person described the final as “the Zenith of Irishness” — to know it would be an affront to my heritage to miss this opportunity. 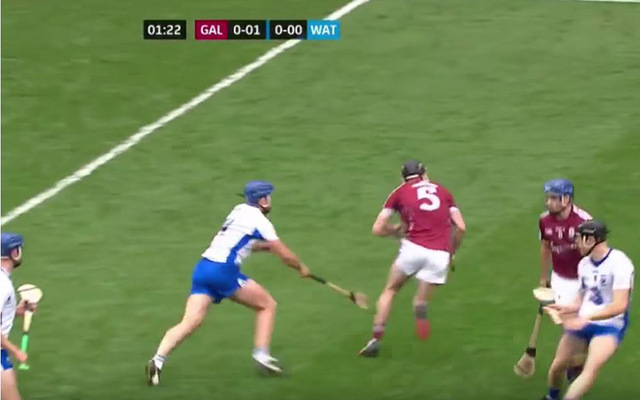 The 2017 All Ireland hurling final in Croke Park. RTE/YouTube

Last Saturday night CNN and the world media were  buzzing with talk of Donald Trump’s twitter account and North Korean hydrogen bombs. Talk of World War Three was the buzz for the day.

On Sunday In Dublin, North Korea and Trump might as well have been on the comics page. There was only one showdown that mattered now, and it was between Waterford and Galway, in the day’s All-Ireland Hurling final championship match.

I was one of the lucky ones who found myself with a ticket to the game, so it was off with CNN and on towards Croke Park in North Dublin for my first ever hurling match.

But as an American, I knew as much about the game as I did President Trump’s next move. I wasn’t even sure for whom I was supposed to be rooting. I turned to my friend for guidance.

“My grandfather is from Armagh, so am I Waterford or Galway?” I asked him.

“Well, that would make you…” he thought about it for a minute. “You’re nothing.”

That sounded about right. More than just the ignorant American, I’m an all around sports idiot and always have been; sports have just never been my thing. I once joined a soccer team when I was six years old, but after the last game of the season I chucked my cleats in the trash and never looked back. Even then, I knew it wasn’t for me.

Gym class was the one I cut most regularly in high school and I once worked for a men’s magazine for nearly two years and avoided writing about the subject entirely (no easy feat). I’m constantly left with only the subject of the weather with which to make small talk and I think my total lack of interest in sports has probably caused me to forfeit a job interview or three.

But I did know enough about hurling and the game’s importance in Irish culture — one person described this weekend as “the Zenith of Irishness” —to know it would be an affront to my heritage to miss this opportunity. A 2,000-year-old game, an Irish spectacle like no other, a perfect late summer day, a stadium packed with 83,000 screaming Irish men and women too. Game of thrills, not game of thrones.

I was perplexed before the game even began. Although there had been a decent amount of beer-drinking on the street outside the stadium, there didn’t appear to be so much as a drink within the stadium’s walls,  I’d been to Ireland enough to know that the perception of all Irish people to be booze funneling, drunk-in-public street brawlers was a false and even offensive characterization, but I was still genuinely shocked to see a crowd of 83,000 cheering sports fans so respectful and tame.

Here, everyone in my vicinity was downright friendly.

And the love of the game felt altogether different, too. I’ve never understood the undying loyalty people have for their teams in the States; fans wear jerseys and purchase tons of expensive merch dedicated to players from other cities who will inevitably ditch their home team in a few years time and play for some other rival  for millions of dollars– where’s the fealty in that?

Not so with hurling.

“These players do it for the love of their county. You play where you’re born and you don’t cross county lines,” says one Galway man, John Cominis, who attended Sunday’s match with his son. “It’s deep rooted.”

But perhaps the most shocking thing to this American is these die-hard players, who duke it out year after year for the love of their county, do so without collecting so much as one euro. “For me, it tells something of the Irish psyche,” says a Galway fan after the match. It’s for love, not money.

How magnificently this contrasts with the mire of professional sports worldwide, where the purse size and team “ownership” are the dominant motivators.”

One fan told me the most these guys can expect in terms of pay is for someone to buy them beer at the local pub after a game. That sort of arrangement is inconceivable in the states, where the sizes of our pro’s contracts routinely make news.

As for the actual sport itself, it’s perhaps best described as hockey without skates or pads; lacrosse, but more primal. A madcap dash up and down a green bigger than an American football field. By the end of it, I still had no clue for what the rules were, but the game never slowed down, even for a minute, and the high-pace intensity of the sport makes it enjoyable even for the sports illiterate like myself.

Galway won and Waterford were vanquished. The strains of “Galway Girl “echoed across the giant stadium. “The West’s awake an old man said to me, “ We were asleep for 29 years,” the length of time it took between AlI Ireland hurling final wins.

It felt good to be there.