I do not wish to be among the first customers on that one-way flight, but that decision is beyond my ability. However, I am now formally booking my final Shannon flight! 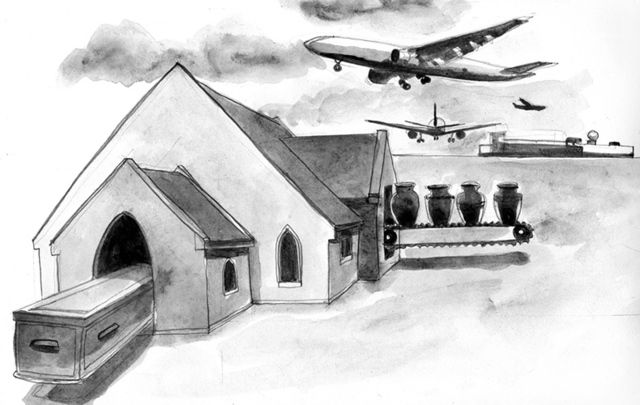 Even though most of you know me well by now, I am quite certain that many of you will be dumbfounded and bamboozled totally by the Shannon yarn I have for your delectation today.  However, I lived within a 10 minute drive of Shannon and its fabled airport for the better part of 20 years, know it very well and would not tell falsehoods about any element of the very special dynamic attached for decades past to Shannon.

For most of us in the provinces, and for most of you with family ties to the rugged west of Ireland, Shannon has a special place in our lives. It has forever been the place through which millions of us have emigrated, often against our wills.

Not a day passes that there are not tearful family farewells to the modern generations of Wild Geese flying out from this small island to take on the world.  Not a morning either that families gather in the arrivals building to welcome back home their own with tears of joy.

Shannon is a place that tugs hard at all the heartstrings 24/7. And it has always been that way.

Thanks to the farsighted genius of a Clare leader called Brendan O'Regan, it was the first airport in the whole world to establish duty free shops and many other attractions. It was in Shannon, for example, that the Irish coffee was invented and first quaffed by the morning's arrivals from the U.S. and elsewhere.

Many of those who will be saying farewell to their Irish families this summer and autumn will again be the brightest and best of the rising generation of the Irish, using holiday visas for their first encounters with the wide world. Some of them, as we know, will be so engaged by that world they will overstay their visas and become members of the undocumented about whom there is so much discussion nowadays internationally.

I wrote quite a good ballad 20 years ago or thereabouts which truthfully pointed out that many of those departing, especially during the economic recession of the past decade, had just completed their Leaving Certificate state examination, the final examination at second level education, and it was sad that the education system did not properly brief them on the reality that the examination was truly the threshold to the real leaving, not just of their childhood homes and parishes but also, in many cases, of their homeland.

Shannon featured in that ballad. The second verse sings like this:

"In the Shannon Airport hall I saw a beauty tall,

The boy who loved her well stood by her side,

She was bound for Boston town to wear her nurse's gown,

She'd got her visa cleared, no need to hide,

But he's been turned away, no job nor place to stay,

I watched them kiss goodbye, I saw her start to cry,

Then she walked the exit line all on her own.

For they were doing their Leaving and still were grieving,

Not quite believing their love is gone,

Though they may fail or pass, for every lad and lass,

When the Leaving is over the leaving is just begun.”

Even with my poor singing voice that verse usually draws tears in pub sessions!

Now, though, to a totally new and unusual Shannon yarn which, as I said above, some of you will find hard to believe. It is about a totally new dimension to the Shannon aviation services and it is unique.

Even against a business background where a rash of new cut-price air services have been announced for Shannon, with fares cut to the bone, especially by new Scandinavian budget airlines, this new service is quite unique.

It is guaranteed that no customer will ever complain about the flight service offered. No matter the destination, involved the price for the one-way ticket (the standard budget airline tactic) will always be the same.

No customer will ever complain about any difficulty in achieving a return booking. It will never arise that a customer already aboard will be yanked off the flight because of an overbooking error by the company. Considering the cost of long distance flights even nowadays, the cost of that one-way ticket is unbelievably cheap. I am so impressed that I am certain to utilize the services of this enterprising local company when I need it rather than, as at present, having to be subjected to travel to either Dublin or Cork for far more expensive alternatives.

You see, I am delighted to spread the news that rural Ireland's first crematorium will begin trading in Shannon in a matter of weeks!  It has been a long time coming but now it is here at last.

I do not wish to be among the first customers on that one-way flight, but that decision is beyond my ability. However I am now formally booking my final Shannon flight!