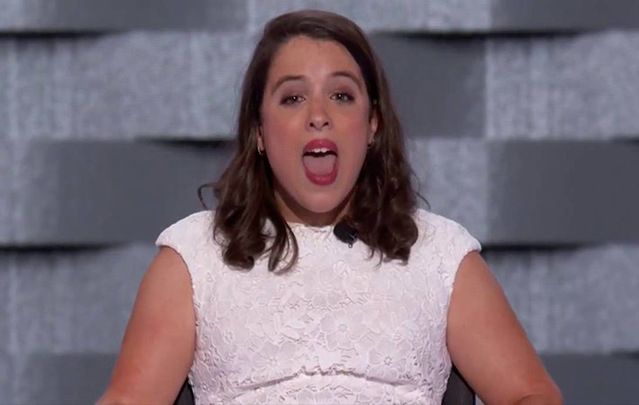 The disabled daughter of an Irish immigrant wowed the audience on the first night of the Democratic National Convention in Philadelphia, bluntly telling Republican presidential nominee Donald Trump that “you don’t speak for me.”

Anastasia Somoza, 32, the New York-born daughter of Dublin native Mary Somoza, a nationally known activist on disability matters, took to the stage on prime time Monday night at the personal invitation of Hillary and Bill Clinton, who she and her family have been friends with since 1993 when Anastasia, then nine, asked President Bill Clinton in a nationally televised children’s forum why her disabled twin sister Alba couldn’t attend the same classes as her.

The Somoza twins became media sensations at the time, and the Clintons were charmed by Anastasia’s determination to look out for her twin. They intervened on behalf of the Somozas, and their mother Mary has waged battles for years with New York City government to ensure equal opportunity education for her girls.

The twins were born with a severe case of cerebral palsy and spastic quadriplegia – Alba is also non-verbal – but that didn’t prevent Anastasia from assuredly speaking in front of the world on Mondayfor four minutes. With regards to the Democratic presidential nominee, she said, “Over the past 23 years she has continued to be a friend and mentor, championing my inclusion and access to classrooms, higher education and the workforce.

She has never lost touch with people like me. She has invested in me, she believes in me and in a country where 56 million Americans with disabilities so often feel invisible, Hillary Clinton sees me.”

Mary Somoza, who has also been active in New York’s Irish community, particularly with the Lavender and Green Alliance, was bursting with pride when she spoke to theIrish Voiceabout Anastasia’s star turn, which came together the week before the convention kick-off thanks to a personal phone call from Huma Abedin, Hillary Clinton’s top aide.

“Huma said Bill and Hillary really wanted Anastasia to speak. Of course we couldn’t have been more thrilled to do so,” said Mary, who was sworn to secrecy until the Democratic National Committee revealed the speaking lineup late last week.

The Somozas received help from a speechwriter who has written for President Obama in the past, and journeyed by train to Philadelphia on Sunday morning for a walk-through of the Wells Fargo Center, site of the convention. Alba and Gerardo Somoza, Mary’s husband and the girls’ father, remained in New York to watch the event on TV.

Anastasia’s physical limitations didn’t deter her from prioritizing education. A graduate of Georgetown University and the London School of Economics, she works as a disability rights consultant and lives at home with her parents and Alba, and their round the clock health aides. Alba is now an accomplished artist who attended Queens College and paints at Pure Vision Arts, a Manhattan studio for those with disabilities.

Hillary Clinton, Anastasia said on Monday night, “sees me as a strong woman, a young professional, a hard worker and the proud daughter of immigrants, my father from Nicaragua and my mother from Ireland.”

Donald Trump, who openly ridiculed a reporter with disabilities during his campaign, would be a disaster in the White House, Anastasia said.

“I know we will show each other and the world who we really are in November when we choose genuine strength and leadership over fear and division,” she said.

“Donald Trump doesn’t see me, he doesn’t hear me and he definitely doesn’t speak for me.”

Social media christened Anastasia as the star of the convention after her speech. She received shout-outs from the likes of Arianna Huffington and formerVanity Fair editor and Daily Beast founder Tina Brown, who called her “moving” and “brave.”

No doubt the Clintons felt the same. The families have remained extremely close since 1993. Anastasia worked as an intern in Hillary Clinton’s New York Senate office and served as a delegate to her 2008 presidential campaign, Bill Clinton attended Alba’s high school graduation, and both Clintons have written numerous letters of recommendation for the Somoza twins to help them achieve their goals. Mary Somoza couldn’t be more effusive in her praise.

“They have been there for us all the time, whenever we needed. We just love them. They could have forgotten about us but they never did. We won’t forget that,” she said.

Mary, Anastasia and her aide will remain in Philadelphia for the duration of the convention, and Anastasia is again a New York delegate. The Somozas had two more children after the twins were born, Gabriella and Oliver, and Mary Somoza offers not a hint of weariness over her non-stop busy life. Advocating for her girls has been her life’s mission, one she says she would never change.

Well done Anastasia Somoza. Your Irish Mammy will be fierce proud of you and so are we!
#DemsInPhilly