IrishCentral Contributor Kevin Stanley recounts a big day out in Dublin for a group of Louth locals in 1957. 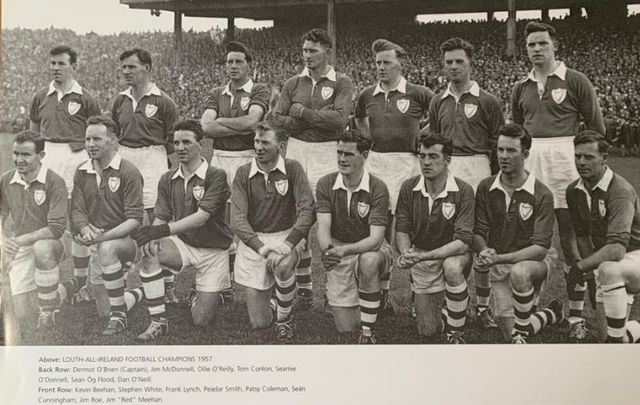 And finally it came – the day they had all been waiting for …. Mammy rose early and put on the big fry so that the lads would be well set up for the day ahead, later she made a flask of tea and sandwiches for the long day and the long trip to Dublin, she even made extra for the cousins – (cos that Bally one wouldn’t think of that), - but that’s another story.

This was Louth 1957 and the county team had made it to the All-Ireland Final in Croke Park, and from pillar to post across the county GAA clubs and local community councils had arranged buses to Dublin so that the fateful could cheer on their heroes – indeed from my own village fellas travelled to Dublin on the open back of a flat- bed fish lorry. Many of the fateful had never left the local area or parish in their lives – it was a right day out for sure.

A group of adventurers from Castlebellingham, otherwise known and pronounced to the locals as “Bellinjum”, were among the faithful. When the bus arrived at the agreed stop near Croke Park, the passengers filed off in quick succession.

One of them had never seen buildings so high and as he descended the steps with his face and open mouth skywards - he quickly lost touch with the lads. Panic began to set in as he had no idea where to go and after a while, he decided to return to the agreed bus stop and wait for his comrades to return.

And return they did full of the joys as Louth had won the Sam Maguire Cup and the excitement and talk on the way home on the bus was palpable and then the “lost” one had an emotional outburst – “Youse are some biys to leave me behind and me not able to get to Croke Park so youse are.”

"What do you mean?" they enquired –

"How did I know where the crowd was going?"

"Well they were not going to Mass at 3 pm on a Sunday," came the reply.

“Sure how would I know what the Dublin people do for Mass and anyway they could all have been Protestants for all I know, there is a lot of them in Dublin, y’know -"

"Not as many as Newry," another voice interjected.

"Don’t know about," that said the 'lost one' and as the conversation drifted to debating the Protestant population of Newry or Dublin one of the lads simply enquired, "Why didn’t you ask a Garda?"

"He just said feck all and kept walking."

"I asked him did he see the Bellinjum biys, and he said 'No.'"