Mayo has secured a place in the GAA's 2021 All-Ireland Senior Football Championship final after knocking out six-in-a-row champions Dublin. 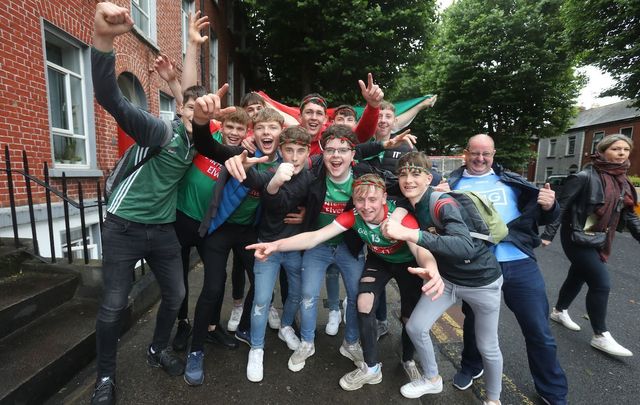 August 14, 2021: A group of Mayo fans gets photobombed by a Dublin supporter at Croke Park in Dublin ahead of the men's and women’s GAA football semi-finals. RollingNews

After beating Dublin in the semi-final, Mayo will now take on the winner of the Kerry - Tyrone semi-final, scheduled for August 28, in the final on September 11.

The green and red of Mayo are finally over their Dublin hoodoo and on their way to an All-Ireland senior football final after James Horan’s heroes came from seven points down to record an epic extra-time win over the reigning Sam Maguire holders by 0-17 to 0-15 at Croke Park on Saturday – the Blues’ first championship defeat since 2014 and the result that ended a 45 game unbeaten run.

Mayo’s fourth final in six years will give them another shot at the title that has eluded them for so many years now, but few will deny them a delayed September 11 showdown with Tyrone or Kerry after they treated Dublin’s seven-in-a-row chase with absolute disdain in a game that looked beyond them after a Dubs dominated first half.

The westerners were seven points down and on their feet coming up to halftime and trailed 0-10 to 0-4 at the break, Dean Rock kicking five of those points for a determined Dublin outfit. By the time of the second water break on the resumption, the gap was down to three as the Mayo defense kept the Dubs scoreless for 16 minutes.

Then this game turned on its head when Mayo’s Eoghan McLaughlin was stretchered off and taken to hospital after a high tackle from John Small which really irked the Connacht side’s boss. It also inspired his players into the sort of comeback that will be spoken about forever, a 77th-minute injury-time point from a 45 by goalkeeper Rob Hennelly forcing this game to extra time at 0-13 each.

That’s when Mayo pulled out all the stops with Darren Coen pointing in the first half of extra-time to put them in front for the first time. They never looked back and punished Dublin for a series of uncharacteristic errors on their way to that sweetest two-point win ever.

Manager Horan was even surprised when referee Conor Lane blew his final whistle with the underdogs those two points clear.

“That was a nice surprise. I thought there was three minutes of injury time so I couldn’t believe it when he put his arms up,” said Horan.

Then he was asked what he said or done at halftime in normal time to turn things around for the Connacht champions.

“Not much,” Horan said. “Just got back to our structure a little bit. They were getting their kick-outs away very easily. We were a bit out of sync with that, so we just went through a few things there.

“And we just talked about lifting our energy a little bit and doing what we’re strong at. The group of lads that are in there, there’s a lot of trust there and there’s a lot of belief there that they can get it going.

“In the first half, you know what Dublin are going to do and the way they are going to play. We were going out in ones trying to press the guy with the ball and he was just popping it off. You need to go out in twos or three and cover the out balls or whatever, so we just tried to put a bit more pressure, not be as deep. There was a lot more contact, a lot more physicality in the second half.” 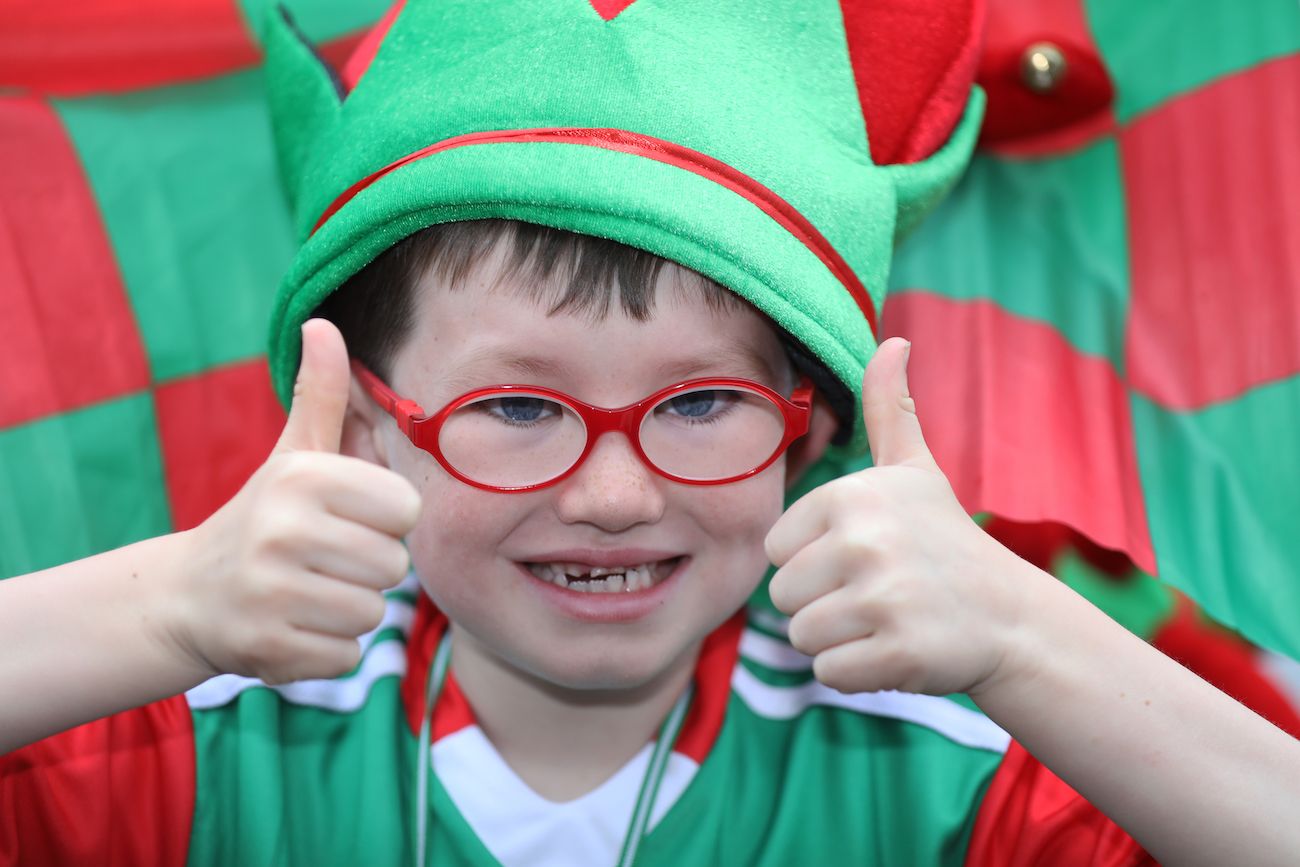 Horan also expressed his upset at the way the McLaughlin injury was handled by the officials – Mayo didn’t even get a free – and defended his own decision to replace captain Aidan O’Shea in the 50th minute.

“We took him off in the Galway game as well. Aidan had an injury coming in, so he worked hard, but we just needed to make a substitute at that time. Whoever came on can do that, and that’s just the way it is. It’s the same as making a sub for anyone,” he stressed.

As for the Small challenge on McLaughlin, he stated, “I know he’s in a lot of discomfort. A lot of discomfort. The medical team are gone to the hospital with him now so we have to see how that is.  (McLaughlin had his jaw broke in two places and underwent surgery on Monday).

“I just thought the Eoghan McLaughlin one in particular, I was pretty close to it, I thought it was very dangerous. The way Eoghan fell, you know by the way a guy falls that they’re in bother and the play just sort of went on. I was annoyed about that, yeah.”

Like his manager, veteran Lee Keegan repeated the lack of panic in their dressing room at the interval or in their play when they resumed six points down.

“Nothing special in the second half, we just didn’t panic as much as the first half. We were kind of dawdling with the ball too much at times. We just started progressing with the ball,” said Keegan.

After losing six championship matches, four finals and two semis, against Dublin in recent years, Mayo will enjoy this win.

Their man of the match Padraig O’Hora described it as “the best day of my life” after ending the longest unbeaten run in the history of the All-Ireland Senior Football Championship.

“It’s impossible to put it into words,” O’Hora told RTE Sport afterward. “Look at this place, what it means to all of us. I can’t even describe. it. It’s unbelievable. It’s the best day of my life.

“We love a battle. We always seem to put ourselves at the bottom of the hill before we go climbing it. We knew what we needed to do, we put in the work all year.”

It will take Dublin fans a long time to get over the disappointment of Saturday’s All-Ireland SFC semifinal defeat to Mayo and the end of an era as the ambition to win an unprecedented seventh straight title ended in defeat and despair.

So, imagine how those inside the Dublin dressing room felt -- manager Dessie Farrell and the players who did so much to dominate Gaelic football in recent years, under Farrell and his predecessor Jim Gavin.

It was Farrell who faced the music on Saturday night as the waiting media in the Croke Park press conference asked him to sum up the feeling inside his team’s temporary HQ, just a couple of hundred yards down the corridor.

“There’s massive disappointment,” said Farrell. “What that group has achieved, or the vast majority of them, has been tremendous. They’ve managed, to date, to keep going back to the well and keep doing and keep doing it, which I can assure you isn’t easy, when you know the hours that go into it and the commitment that’s required and the detail behind it.

“A lot of people see players turn up here on a Saturday or a Sunday and don’t really understand how it takes hold of your life outside of that. For the bulk of them to be able to consistently achieve that over the past five or six years, that’s been a phenomenal achievement. Some of them have obviously experienced this before, a lot of them haven’t.” 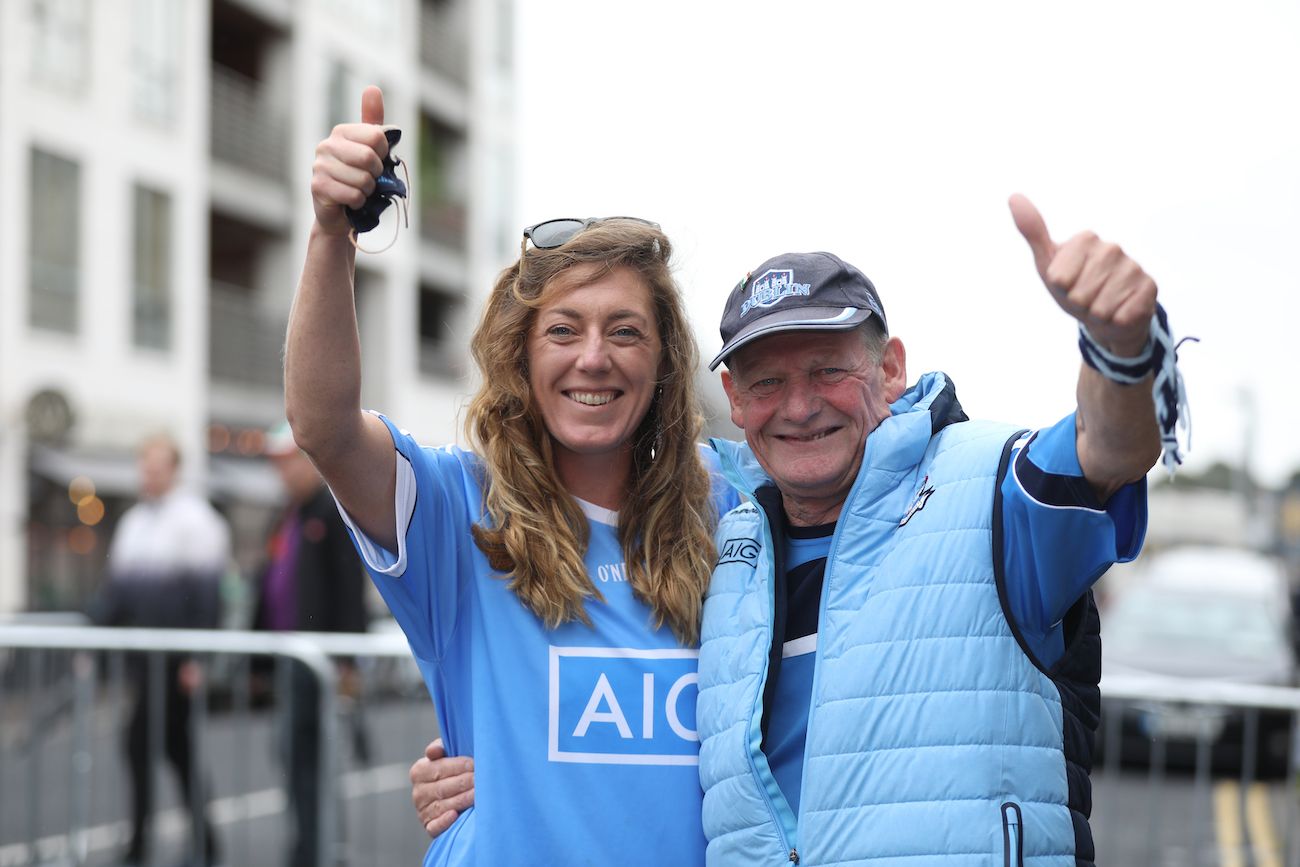 Dublin looked tired and jaded as Mayo pressed in the second half of normal time, a video nightmare Farrell wasn’t exactly looking forward to as he admitted to the media corps on Saturday evening.

“I’d have to view the tape,” he answered when asked where it had all gone wrong. “I just think it was that high press. There was a strong breeze down there. We weren’t retaining enough primary possession off our own kick-out. A couple of big balls there, breaking balls, that are momentum shifters, that we didn’t capture.

“It was tough to watch in that second half for sure. A lot of those lads have been such warriors over the years. You could see the limbs and the bodies were tired there. It was just hard to really generate momentum from anywhere in that second half. That’s the nature of sport, sometimes these things happen and it’s hard to come up with a fix or solution for it.”

Not the result we wanted yesterday, but what an incredible six years we’ve had with this phenomenal group of players. Thanks for everything, lads 💙

Asked what’s next for this Dublin team, Farrell added, “We’re always in a state of transition, players come and go. There’s been a significant amount of that over the last two seasons. I’m not sure what’s going to happen next season.

“Some individuals will reflect on where they’re at and can they go again. That’s a decision for some individuals. There’s a lot of new blood in there as well, who will need time and exposure. Dublin supporters, by and large, will still remember there was a dearth of success in this county. That’s not too long ago.

“So, I’m sure they appreciate what’s gone on in the last number of years and they’ll afford the team and these players whatever level of patience or courtesy is going to be needed over the next period of time.

“There’s still a lot of young, good blood in there. We’ll be excited about what the future holds for them and it’s important for us not to quench those dreams and try and facilitate an environment where those individuals can flourish as well and step up, and maybe have the same level of success to a previous generation.”

Farrell had words of praise for the Mayo team that will now face Kerry or Tyrone in the All-Ireland decider. “You’d have to have huge admiration for Mayo,” said Farrell.

“The Dublin team have shown a lot of humility in victory over the years. We’re exceptionally gracious in defeat as well. Hats off to Mayo. That second-half performance, we just couldn’t live with them.”

*This report first appeared in the August 18 edition of the weekly Irish Voice newspaper, sister publication to IrishCentral.