Like despairing echoes of Ireland’s Great Hunger, thousands are gathering on the shoreline in Puerto Rico now, desperate to flee the stricken island. 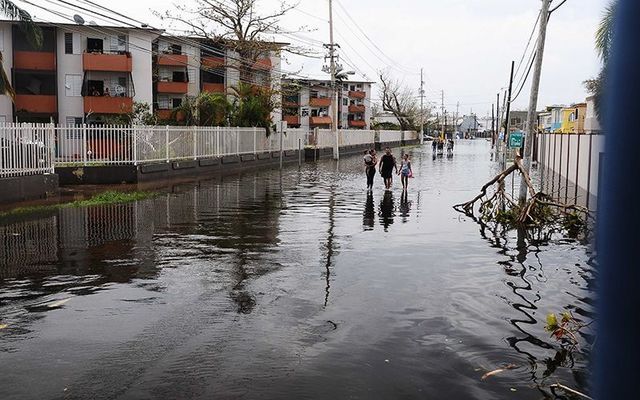 One day they will write songs about the terrible suffering of the people of Puerto Rico, but just one month after Hurricane Irma they still have to save themselves first.

3.4 million American citizens have had their lives upended by the storm, living without electricity or water to drink or bathe in. Power lines have been ripped up the the ferocious Category 4 hurricane; even the vegetation has been turned up at the root.

Like despairing echoes of Ireland’s Great Hunger, thousands are gathering on the shoreline in San Juan now in the faint hope of boarding cruise ships that can take them far away from the unfolding disaster. Please take me with you they plead to the ship’s stewards. Please.

All five living former US presidents will take part in a benefit concert today to raise money for hurricane relief https://t.co/IeJNRsZC6V pic.twitter.com/xYyhxKg7eI

Once these ships were filled with arriving tourists eager to experience the sun and fun of tourist San Juan. Now the traffic is flowing the other way and passengers aren’t sauntering, they’re fleeing.

One million Americans are without water. Three million are without power. It’s a 19th century disaster unfolding in the 21st, and the truth is that most of these people are on their own.

Puerto Rico's governor: There could be a mass exodus to the mainland US after Hurricane Maria wiped out electricity https://t.co/Sz4r7dlXaj pic.twitter.com/GgHXztwcHy

Relief efforts arrived and left early. People were soon left behind in their roofless houses to fend for themselves. The despair is much greater than any attempt to ameliorate it critics say.

This week camera crews visiting the interior of the island for the first time since the storm hit were immediately surrounded by desperate survivors, anxious to get word out to their worried relatives abroad. We survived, they tell stunned camera teams. Tell our relatives that we survived.

But their homes have been destroyed by Irma, and many have retreated to the only major standing buildings left in their communites for shelter. There, the chronically ill must share space with young families in School Houses and Fire Stations. The bathrooms have long ago become unsanitary. Desperately needed medicine can not be found.

This is what POTUS calls a 10! Surgery performed with cellphones as flashlights in Puerto Rico today. pic.twitter.com/5pnK5dkkE6

At night there are no street lights anywhere and conditions are becoming unsafe. Mothers especially feel the growing danger and many are trying desperately to escape the island with their children in tow.

"I thought we'd learned our lesson after Hurricane Katrina where the response was awful, both carelessly slow and incompetent," John Mutter, a professor at Columbia University and an expert in international disaster relief, told CNN. "In Puerto Rico, it doesn't look like we've learned anything at all - or we just don't care."


Its estimated that about 35% of Puerto Rican households are without access to safe drinking water, according to the latest government estimates.

The World Health Organization has reported that each person needs at least 2.5 liters per day for drinking alone, with a recommended daily allotment of up to 15 liters per day including basic cooking and hygiene.

But FEMA has managed to provide 23.6 million liters - or 6.2 million gallons - of bottled and bulk water since the storm hit on September 20 and that figure includes water delivered to hospitals and dialysis centers.

That's roughly 9% of the actual drinking water needs for the entire island. Health experts worry that cholera and diarrheal diseases may soon follow. The crisis is in Puerto Rico is only beginning, it would seem.