Christmas morning in Ireland: Memories from decades gone by

Reflecting on the Christmas mornings from my childhood spent going to mass and tending to the cows with my mother. 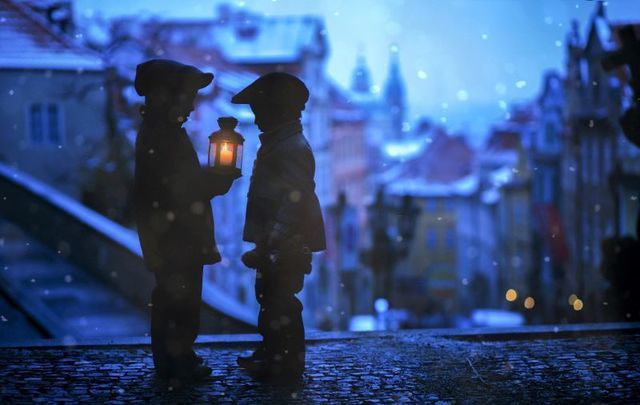 Memories of Christmas mornings from a bygone era. Getty Images

This time of year always makes me think back on Irish traditions and my collection of Christmas mornings in Ireland.

Six o'clock on Christmas morning. Icicles hang from the corrugated roof of the cow-house like pendants of some gigantic necklace, pitchfork handles welded to the concrete wall, trails of vapor rising from the calf-house like steam from New York street vents. The frost clings to our eyebrows, makes spider casts in our hair; the cold dams the flow of blood to the extremities of hands and feet. In a church that my grandfather had helped build we are going to witness the birth of a Christ in the likeness of man.

Read More: The very special celebration that is an Irish Christmas

We troop in single file across a moonscape of frozen eternity. Overhead the Milky Way arcs from northeast to east in a dazzling vista of impossible comprehension. We cling to the mass path along the hedgerows, that same meandering pathway to school and church that generations of feet have trodden bare. When we reach the last stile that leads onto Mount Henry lane we hide the Wellingtons and don the Sunday shoes that my mother has brought in an oilskin message bag.

The whole world is astir. Lights of paraffin lamps splay shafts of light amid groves of pine where the houses stand. There are trap carts on the road and a throwback phaeton to a time when its occupants ruled the world. Lanterns on the trap cars, winking like the outer stars of the Milky Way, bicycle flash lamps casting grotesque shadows on the grass margin of the road.

Christmas in Ireland can be magical when it snows. Image: iStock.

Read More: A hard Christmas it was in London in the 1960s

A sickle moon like a coat hanger dangles a star from the end that faces towards Roche’s Wood. It seems to be sitting on the little tower that houses the church bell, its back to the wind that blows down from Ardagh. It could be the star that traveled east, someone ventures, the same one that guided the Wise Men to the stable. Baltahasar, Melchior, and Caspar, the names drop off like droplets of treacle in the rote memory cell where they have languished. That’s no star, my father says from the head of the troop, that’s the planet Mars.

My father knows the heavens and sometimes as we walk through fields at night, he shares me a little knowledge with me. Long ago, in the depth of winter, a traveling teacher came to the school and conducted a series of night classes. On start-bright nights he would take his students onto the yard and teach them the night sky. Ursus Major, Ursus Minor, Cassiopeia. Saturn rising, Venus declining, the great arc of the Milky Way. And Polaris. Oh yes. Not the brightest star in the heavens but the most important. Once you could find Polaris, due north, you could find any direction. Young fella me lad, I whist this to you. Keep it to yourself, there are people out there who’d laugh at us both if they knew what we were talking about. So, under your hat, good man yourself.

People standing in little knots, from the wall railings to the front door. Happy Christmas, Happy Christmas, same to you, same to you. For my father handshakes, for my mother hugs and sometimes a kiss on the cheek. I feel I can reach out and touch this aura of goodwill that hovers over our heads and sends out pulses of cheer like a crackling fire. I forget the cold that has stiffened the hair on my eyebrows, excised my fingertips, scraped the flesh from my toes. A younger brother takes me aside and whispers. He has broken the fast, nicked a sweet from his sister’s present. Will he be struck dead if he goes to communion? Chance it; it may be a better prospect than admitting to the disgrace. But I don’t want to die, on Christmas morning of all times, before I have a chance to play with the timber horse and the ball frame and the spinning top.

Home through the rimed fields. The fire has burned down. We huddle like doomed children in a Grimm’s fairy tale. My father and mother dance around the kitchen table, round and round like figures on a music box, he in his Sunday best and the shirt collar with the turned-up edges. She in a long black dress and a fox fur draped over her shoulders. Round and round, a glow of warmth returning to their faces. They dance to his makeshift tune, Father Halpin, Father Halpin, Father Halpin’s topcoat, Biddy Murphy, Biddy Murphy, Biddy Murphy’s gold ring. All of a sudden she pulls away. This won’t get the cows milked.

My father would never milk the cows on Christmas. Image: iStock.

My father never milks cows. It’s beneath his dignity, like holding his arms aloft so that she can wind the hank of wool into a ball. We change the clothes, my mother and I, and go to the cowhouse. I can feel the blast of hot air the moment we enter. This is sometimes my wintering place. I come here when there is no room around the fire or I am in a sulk from being blamed in the wrong. Some night, some night when the hail lashes against the bedroom window, I will slink out here in the dead of darkness and sleep in the empty stall beside the speckled cow. I have an answer ready for those who may mock my resolve. Greater than me have slept in worse places, greatest of all slept in a manger.

A jet of milk hits the inside of the milking pail like a taut wire being pinged. It will go on sounding like that until froth has risen and then the sound will be like a weasel spitting in the hedgerow. I think of a poem my oldest brothers knows, written by a man called Kavanagh.

My father played the melodeon, my mother milked the cows, and I had a prayer, like a white rose pinned, to the Virgin Mary’s blouse.

What is your favorite memory of Christmas morning in Ireland? Tell us about it in the comments section, below.