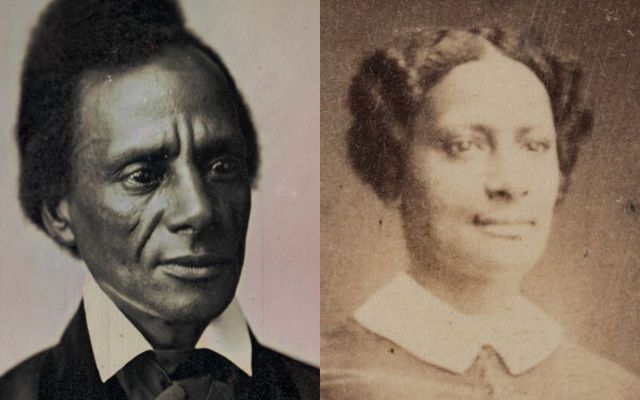 While Frederick Douglass is the most well-known Black abolitionist who visited Ireland in the 19th century, he was not the only one.

As many as 30 American activists made the journey to Liverpool, and then onwards to Ireland, in the hope of building a strong trans-Atlantic movement that would end the system of enslavement in all parts of the world.

Two of the most remarkable abolitionists who made this journey were siblings. Charles Lenox Remond and Sarah Parker Remond, both visited Ireland, although their visits were separated by almost 20 years, and reflected their own distinctive personalities and interests.

Charles and Sarah were born in Massachusetts to John and Nancy (neé Lenox) Remond, two free-born Blacks, who owned a successful catering business. Charles was born in 1810 and Sarah in 1826. They had eight siblings. Even though born into a relatively affluent family, the Remond family encountered prejudice and discrimination throughout their lives, including being denied access to a formal education. Very early on, they realized that it was not enough to simply end enslavement, but it was necessary to challenge and overturn endemic racism.

From an early age, Charles and Sarah become involved with the American Anti-Slavery Society, which Charles had helped to found in 1833. In the 1840s, a young self-emancipated former slave joined the Society, Frederick Douglass, and he and the Remonds became lifelong friends, and often lectured together. Charles travelled to London in 1840 as a delegate to the first international anti-slavery convention. There, he heard Daniel O’Connell speak which prompted him to write to a friend in America:

My Friend, for thirteen years I have thought myself an abolitionist, but I had been in a measure mistaken, until I listened to the scorching rebukes of the fearless O’Connell, … when, before that vast assemblage, he quoted American publications, and alluded to the American Declaration [of Independence], and contrasted theory with practice; then I was moved to think, and feel, and speak as an abolitionist.

In 1841, Charles visited Ireland where he lectured in Dublin, Wexford, Waterford, Cork and Limerick—a path that would be followed by Douglass four years later. His genial personality made him popular amongst Irish abolitionists who described him as ‘An extraordinary young fellow … He disarms prejudice by his amiable manners, and he reaches the heart by his eloquence and the truthfulness of his statements’.

One of Charles’s main purposes in visiting Ireland was to collect signatures on a petition appealing to Irish Americans to support the abolition of slavery. Although over 70,000 Irish men and women signed the appeal, ultimately it had little impact. Charles returned to America at the end of 1841, anxious to be reunited with his family, but also reluctant to return to a land of enslavement and segregation. He never forgot his joy at hearing O’Connell speak and spending time with Irish abolitionists and, as he explained, for the first time in his life, feeling he was regarded as a man and not a colour.

Sarah first lectured at abolitionist meetings when only a teenager – unusual not simply because of her age, but also because of her gender. Her feistiness was evident in 1853, when she was ejected from a theatre in Boston, on the grounds of her colour. During the process, she had been pushed down the stairs. Sarah took the matter to the press and the police: the theatre was fined and made to pay the legal costs.

Sarah travelled to Liverpool in 1859, her reasons being ‘that I might for a time enjoy freedom, and I hope to serve the anti-slavery cause at the same time’. As had been the case with Charles and Douglass, she was denied access to a cabin on the 11-day voyage across the Atlantic. Shortly after her arrival, Sarah travelled to Ireland staying with the same abolitionists who had made her brother so welcome. She lectured in Dublin, Waterford, Clonmel, and Cork, often as a guest of female abolitionist societies. She impressed all whom she met, one Dublin newspaper writing, ‘She is remarkably feminine and graceful, coupled with a quiet, dignified manner, a well-toned voice and pleasing style of enunciation’.

Sarah was a gifted speaker who spoke fearlessly about the sexual abuse of women who were enslaved, appealing to Irish women to agitate on their behalf. It was a topic rarely addressed by men, and a cause that Sarah made her own. In addition to this topic, Sarah also spoke out on behalf of oppressed everywhere, including the Irish poor.

Sarah had intended to stay in the United Kingdom for a year, but at the end of that time, she enrolled at a college in London. By doing so, she probably became the first black woman to earn a degree in Britain. In 1866, Sarah made another brave and life-changing decision when she moved to Italy, to train as a doctor. Ten years later, aged 50, she married an Italian man.

Douglass visited Sarah in Rome in early 1887, with his second wife, Helen. He wrote of this reunion:

We met here she that I knew forty years and more ago as Miss Sarah Remond, and also Maritcha Remond … It was very delightful to meet this charming circle of Massachusetts people a way off here in the city of Rome. Like myself, the Remond sisters with [the] exception of Caroline, have grown quite old, but in all of them I saw much of the fire of their eloquent Brother Charles.

Sarah never returned to America but died and was buried in Rome in 1894. Her beloved brother, Charles had died in 1873, after suffered from ill-health for years.

Individually and collectively, Charles and Sarah were courageous, likeable, and relentless, proving to be champions not only of enslaved people, but indefatigable opponents of oppression wherever it existed.

*Professor Christine Kinealy is a Board Member of the African American Irish Diaspora Network. She is author of "Frederick Douglass and Ireland. In His Own Words" (2018) and "Black Abolitionists in Ireland" (2020), which includes chapters on the remarkable Remonds.

To honor the memory of both Black and Irish activists in the quest for human rights, the African American Irish Diaspora Network is hosting a Diaspora Leadership Award Gala in New York on September 29, 2022. Those being honoured include President Mary McAleese. This event will also be a time to reflect on what we, as individuals, and as descendants of two great diasporas, can do to effect positive change in the world. For more information on the Gala, contact Carla at carla@carlacapone.com or visit AAIDNet.org.