A beautiful man’s meanderings as Clare emerges from lockdown

"He took his stick, stiffly searched his pockets for cash for the candle of thanks for the recovery, and slowly shuffled to the side-altar to light the candle." 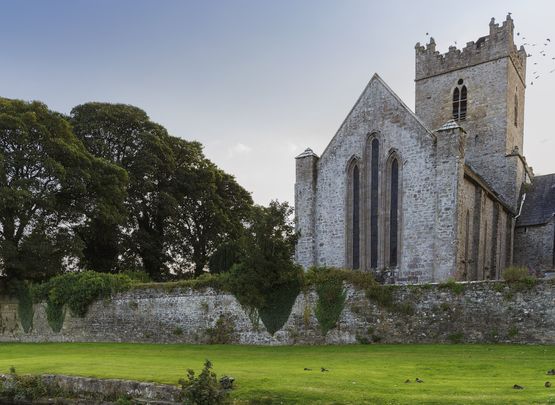 A sultry June afternoon in bonny Killaloe in East Clare with the lockdown just over, shops and bars open again, excited schoolchildren already in the early throes of the Leaving Certificate examinations which will largely determine the shape of their lives in the years ahead.

Electric atmosphere amongst them. Will I pass or fail?

The Clare air crackles over their young heads. The latest quirk of what has been a cruel year for them all.

A very old, frail man leans heavily on his walking stick as he passes through the throng.  He is shuffling slowly towards St. Flannan's chapel nearby. The chapel is almost empty as he shuffles slowly behind his stick to sit down stiffly at the end of a chapel bench.

A stray sunbeam leaks through one window and illuminates him with almost X-ray brightness as he sits there with his eyes closed, and one of the two middle-aged ladies sitting together gasps audibly at the sight before her.

"Christ above us all," she said to her friend, "I thought he was gone from us.  Wasn’t he rushed to the hospital unconscious only a couple of months ago. Thought he had done his Leaving already."

"I'd say he's not far away from it," her friend whispered.  “Look at him. He's only about half the size he was when I saw him last back in March."

The old man, meanwhile, eyes tightly closed, was reflecting to himself ruefully that he could only recall two lines of a song he'd composed in his prime, years earlier, about the Leaving examination.  It had been popular then too and he'd often sung it in one of the county pubs when he still had the voice of a singer of bar-type songs.

Not any more he thought, as he rattled the two lines he remembered through his head. “They said that those who teach the youth don't teach them all the truth, that when the Leaving is over the Leaving is just begun.”

"Our Johnny used listen to him on the radio station a lot even though Johnny said he talked too much and didn’t play enough good music on Clare FM. Never listened to him myself.”

"Me neither. Dammit look at him there. Looks as if he's unconscious or worse this minute. He could be doing his Leaving, so to speak, right before our eyes!"

"Heard he was out of the hospital and the missus is now getting an allowance for looking after him in case he falls down the stairs and breaks his neck or maybe sets the house on fire.  He'd be a crabbit ould lad to live with I'd say. Don't envy the wife one bit, the poor lady."

The old man, meanwhile, eyes still closed as if sleeping or unconscious, was thinking he'd like to light a candle for an American young lady called Alana of a family he knew over there because the girl had recently recovered from contracting Covid and she had, he thought, a beautiful name.

He took his stick, stiffly searched his pockets for cash for the candle of thanks for the recovery, and slowly shuffled to the side-altar to light the candle.  It was a slow process before he got everything done.

Eventually, the little candle burning brightly at last, he shuffled back to his bench, knelt down for the first time and said simple silent prayers for Alana and all the loved ones of his own family.  His stick fell down into the chapel aisle and it took him some time to recover it as he sat up again.  The errant sunbeam returned again briefly and glinted on his bald poll and silvered hair and beard.

"Surely that poor old lad will be lucky to make it home again from here unless the wife comes in to pick him up. He won't be going anywhere near any of the pubs this evening for sure."

"I'd say you're right on that score."

The old man slowly left his bench. Leaning heavily on the walking stick, he began to shuffle slowly out of the chapel into the June realities outside.

When he was passing the end of the bench where the two women had been observing him from he noticed that both of them nodded at him with empathy and gentle sympathy.

I responded similarly of course.