Do things change? A look back at the brief history of America shows that victims become perpetrators. 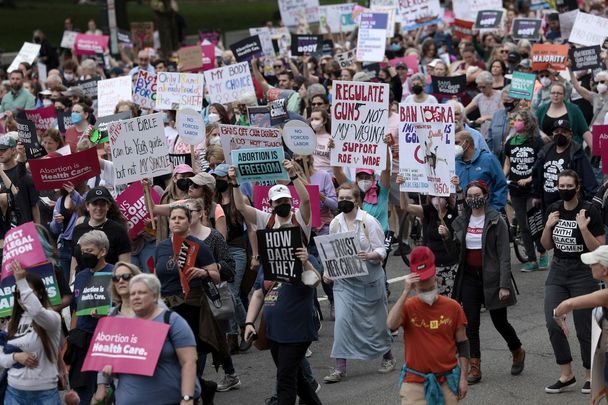 May 14, 2022: : Abortion-rights demonstrators walk down Constitution Avenue during the Bans Off Our Bodies march in Washington, DC. Getty Images

“Do things change?” the post wondered, before offering up what is described as an “early version of the racist ‘great replacement theory’” which “drove the campaign to outlaw abortion.”

This is certainly timely. The Supreme Court just ruled that there is, in fact, no federally protected right to abortion. And it was no coincidence, many angry folks noted, that the high court is currently packed with Catholics.

As for guns, well, I suspect there’s already been another mass shooting since I wrote the first sentence of this column.

The Salon post begins, “White supremacy was one of the primary motivations behind the first movement to outlaw abortion.”

Professors Tamar Kay and Susan Ostermann add that the American Medical Association (AMA) “launched a crusade to end abortion" in the 1850s. The AMA and other “white male Protestants…feared the growing number of immigrants from…largely Catholic countries.”

Back then that meant Ireland, of course.

A physician by the name of J.T. Cook argued, in 1868, that "the Anglo-Saxon race is rapidly dying out.” He worried that Irish Catholics and other immigrants were “fast taking the country…by the sheer force of their ever-increasing armies of babies…"

This all makes a certain kind of sense. Especially since scholars love to sympathize with past victims of “Anglo Saxon” bigotry.

And Irish Catholics certainly were that.

One anti-abortion activist complained, "Half a dozen children in every Irish family. Only two in the modern American family. What is the matter?”

Well, too many WASPs were having abortions.

“That is why, shortly, the children of the Emerald Isle will be walking through the graveyards of the Puritans," complained the same anti-Irish activist.

And so, Kay and Ostermann argue, nativist bigots who were worried the Irish were taking over the country set about “criminalizing abortion,” to combat the Pope’s fast-growing U.S. Army.

Well, as Kay and Ostermann themselves note, these Catholic immigrants, seen as “inferior races who threatened the country,” were also opposed to abortion.

And so, as time went on, they performed a neat trick. They went from being victims of WASP persecution to perpetrators of what we might call WASC persecution. The “C” standing for a kind of general Christian supremacy.

Let’s ignore, for a moment, that “Christians” have battled each other far longer than they’ve gotten along peacefully.

What is generally said about Catholic immigrants is that they “became white” – and, hence, part of the “systemic” problem.

Even if the whole point of calling out “systemic” oppression is to expose how it is rigid, inflexible, and profoundly difficult – if not impossible – to change.

And yet, here were Catholics from Ireland – and Italy, and Poland, and elsewhere – showing us that “the system” might actually be quite fluid.

And those who are paying attention might see today’s immigrants and their children revealing a similar fluidity.

This means working-class folks with roots in Asia and Latin America are, or are becoming, “white supremacists.” This may mean the phrase doesn't really tell us much anymore.