Sea-change in the North as dramatic nationalist majorities emerge

Nationalists now hold the majority of Westminster seats in Belfast for the first time the reports said. 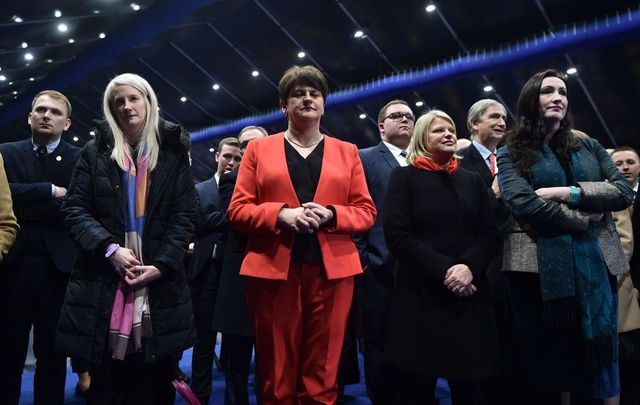 The jokes began quickly because humor is often the best way to contend with a dramatic change.

“Arlene Foster has arrived,” tweeted Chris Donnelly. “Somehow it seems appropriate that this count is taking place in the Titanic Exhibition Centre. The DUP certainly has hit an iceberg tonight.”

Arlene Foster has arrived. Somehow it seems appropriate that this count is taking place in the Titanic Exhibition Centre. The DUP certainly have hit an iceberg tonight.

To grasp the sheer scale of the change that has just occurred, the North Belfast seat that once belonged to the father of Unionism (and arguable creator of Northern Ireland itself) Edward Carson is suddenly, for the first time ever, held by Sinn Féin's John Finucane.

Looking blindsided by Finucane's victory Foster, the DUP leader, told the press she “regretted” Finucane's “lack of grace” in victory, and she added that the “demography just wasn't there.”

Clearly she feels Finucane's election is simply attributable to what she called a “pan-nationalist front,” rather than to a popular pushback against her own party's unwise embrace of Brexit.

Foster's bluntly sectarian headcount makes it clear the larger lesson of this moment eludes her - and will always.

If the DUP has lost 2 seats (North and South Belfast) = 8. If Sinn Fein has 7 and the SDLP gains 2 = 9. Nationalist MPs will outnumber Unionist MPs for the first time in Northern Ireland’s history. Defining moment. #GE19

Foster has famously stated that in the event of a vote in favor of a united Ireland, a vote that is now more likely than ever, she would leave the country. “If it were to happen, I’m not sure that I would be able to continue to live here, I would feel so strongly about it. I would probably have to move,” she said.

Predictably, jokes were being made online last night about unexpected Foster sightings at Belfast airport. Then "Arlene's Passport" started trending on Twitter.

But despite the strength of the popular opposition to DUP policies and their unwelcome Brexit push, gloating was not as pronounced as the celebration that a tectonic power shift has occurred democratically.

In England, things were different last night, of course. For three years now The Conservative Party has tormented the citizens of the UK with their endless Brexit dumbshow and yet they were returned in a landslide. Whatever has possessed them, the English seem determined to pursue their sparkly chimera wherever it leads.

In the North meanwhile, yesterday's dramatic and transformational vote is making its own statement about its part in the future direction of the UK - and the message is that the North doesn't want to join England in its jingoistic march over a cliff.

Former Ulster Unionist Party leader Mike Nesbitt in a BBC interview tonight-
"The great irony of all of this is that for decades unionists have looked over their shoulders and decided that Irish nationalists were the great threat...but actually it’s English nationalism"

In seeking to restore their lost empire spirit, English nationalism is ironically and unintentionally presiding over the breakup of the last vestiges of their own empire instead.

There's an irony in that and a moral too, but they don't teach Irish history in English schools so they may never know it.