Whole potato, half potato - how Ireland ignore its two-tier system

"The past two decades have provided us with unforgettable opportunities to take a cold hard look at ourselves, including the kind of society we created." 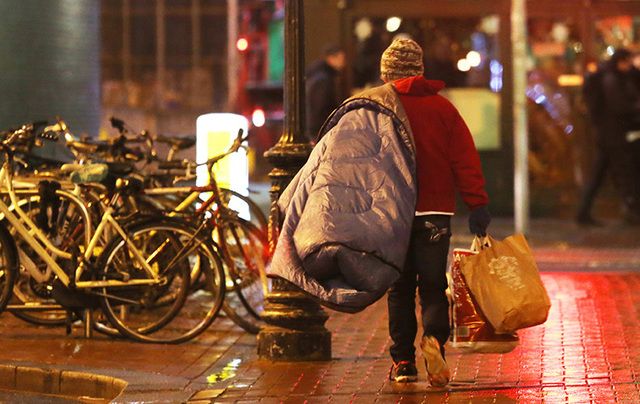 Homelessness is rife in Ireland. RollingNews

Ireland is a two-tier nation. You can live in one and never encounter the other. The system has been constructed to ensure you don’t, in fact.

The fault lines rarely get exposed because we prefer to export our political crisis – which is always best embodied by our swelling numbers of emigrants – before political upheaval is the inevitable result.

It’s an enduring system; it’s like a valve on a steam pipe. When public reality collides with private aspiration you can just hand someone a one-way plane ticket. You’re not being swept under the rug.  You’re literally seen off.

It used to work better in the era before the Internet, this ejector seat system. Boom, you were catapulted to the other side of the world, with your overstuffed suitcase full of amber tinged memories and your miraculous medal and your letter of introduction to the local county society or the GAA.

Back then leaving instantly took you out of the picture, ended your participation, silenced your voice, and essentially dealt with you. Those left behind could return to their rapidly restabilizing two-tiered nation, back to their leafy lanes or their squat council houses.

Now though, the cacophony of raised voices never comes to an end. We have web based petitions and websites and Skype and WeChat. Facebook and Google and Apple have their offices in the old sod. We need not and we do not disconnect.

What this means is that the leave takers are still able to make their voices heard in an act of digital ventriloquism, and this fact has been the most destabilizing challenge to the politics of our Republic since the foundation of the state.

It won’t make any difference. We still have a 19th century political model attempting to navigate the 21st century. Upheaval and transformative change are on the cards.

The choice, as elsewhere in the world, will be between populism and progressivism, and our canniest political leaders have already discerned that for some time.

Toward the middle of the noughties it was interesting to watch the tonal shift as our right of center politicians suddenly discovered social progressive causes. After almost a century of silent indifference they found their tongues and lamented the disparities they saw around them, or the less threatening ones anyway.

Refugees and the homeless have been left, more or less, to the four winds as other equally urgent but less potentially destabilizing themes have been tackled, with salutary outcomes for us all.

I don’t know why we continue to live like this, in this piecemeal, faltering fashion.  Recall that it took a populist progressive movement to tackle the chronic issue of homelessness in Dublin, which shone a blinding halogen light on the callousness that has always underscored our complacency.

The past two decades have provided us with unforgettable opportunities to take a cold hard look at ourselves, including the kind of society we created and what it did to many of our countrymen and women, but once again our own short-term interests have clouded the mirror.

It’s been seen in the economics of the city versus country divide. Even our pension system is two-tiered, with some covered by decent occupational pension arrangements but the majority not.

Our leaders put a brave face on it but their ruthlessness speaks for itself. What’s different now is that anyone can see it.