Donald Trump prepares for a record second impeachment hearing in the Senate after the Capitol riots on Jan. 6. 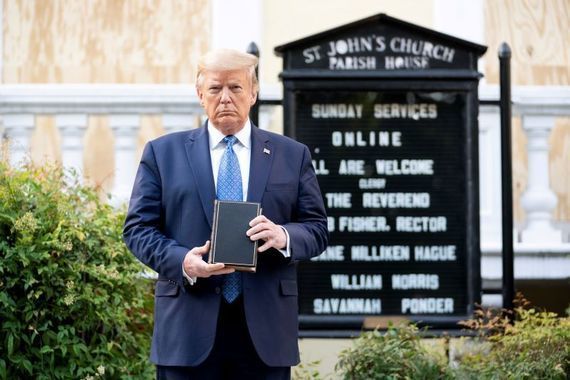 With fighting words like these delivered to his red-hatted supporters on January 6, Donald Trump sent thousands of angry, deluded people to the Capitol Building to attempt a violent insurrection.

Seven people were killed. Many more would have been had it not been for the quick thinking of Capitol Police officers and Congressional security staff on the day.

For this reason, Trump now faces an unprecedented second impeachment trial over his seditious attempt to prevent the certification of President Joe Biden's election win.

NEW: Security video just released at Impeachment trial shows man with Confederate flag was at the frontline of breach pic.twitter.com/vNeMUdkybs

It was a moment when violent extremism could have easily changed all of our destinies, installing a would-be dictator in the White House instead of an American president.

The danger Trump represented to the democracy that rejected him is now self-evident. Had his supporters succeeded in killing or imprisoning their political opponents as they planned to on the day we would no longer be living in a democracy now, or indeed in the United States of America.

Given the choice between accepting his defeat or tearing the nation apart, Trump did what he always does and put his own personal ambition before a peaceful transition, with lethal consequences.

Calculating correctly that the Republican party and its most ardent supporters now belongs to him, he put his theory to the test by sending them by the thousands to attack the Capitol in a lunatic attempt to overturn the democratic will of the people.

But we only call it lunatic because it failed. Had this violent insurrection succeeded – and the only way it could have would have been through targeted killings – then an uprising that attacked everything America purports to stand for would have turned this nation and its history on its head.

Recall that when it was ongoing Trump refused to make a public call to stop the violence, instead retreating to his private office to watch it gleefully on his television.

Staffers pleaded with him to make a statement but he waved them all away, convinced what he was seeing would protect him from recognizing the truth: that he had lost the election, that it was fairly decided, that Joe Biden would be his successor within weeks.

His supporters waged literal war for a disgraced, one term reality TV star who wears orange make up and who must hold a New York record for bankruptcies. “Fight for Trump!” his supporters yelled as they attacked police officers with spear tipped American flags. It's was as obscene as it was infuriating.

181 people have been charged with offenses related to the insurrection to date, which is nowhere near the number of actual participants. The majority of them claim they took part in the riot because they believed that Trump had told them to.

Over 40 percent of the phones tracked in DC had attended Trump's speech before they attacked the Capitol, confirming a clear link between the people who had listened to the president and his allies and then marched on the Capitol building.

Trump did not act alone. House Republican leader Kevin McCarthy, House Republican Whip Steve Scalise, Senator Ted Cruz, and Josh Hawley in the Senate also spread the great lie that the election had been rigged, that the voters had been cheated, that the new president was an imposter, and that democracy had been stolen. They need to face consequences for inciting a mob but so far their lies have been unchallenged.

Months before the insurrection I warned in this column (as did innumerable writers elsewhere) of the danger of Republican leaders spreading an obvious conspiracy theory to incite their base. But no senior members of the GOP took these warnings seriously. They remained silent as assorted kooks and cranks of all stripes set the agenda for their party, including the conspiracy theorist in chief, the president himself.

“Those who foolishly sought power by riding the back of the tiger ended up inside,” said president John F. Kennedy once, in a warning crafted for our own times. In their arrogance, people like Trump and Cruz and McCarthy thought they could control the tiger their words had unleashed, but the truth is it devoured everyone in its way, policemen and staffers and political leaders and the press. It's a miracle more people were not killed by this rage monster that Trump unleashed on America.

Osama Bin Laden did not personally fly the planes into the Twin Towers on 9/11. But all of us know that he plotted and ordered it. How was Trump's role in the attack on the Capitol Building any different?