His story is an Irish one. He made the emigrant’s journey and suffered the Tir na n’Og forfeit known to all Irish travelers. 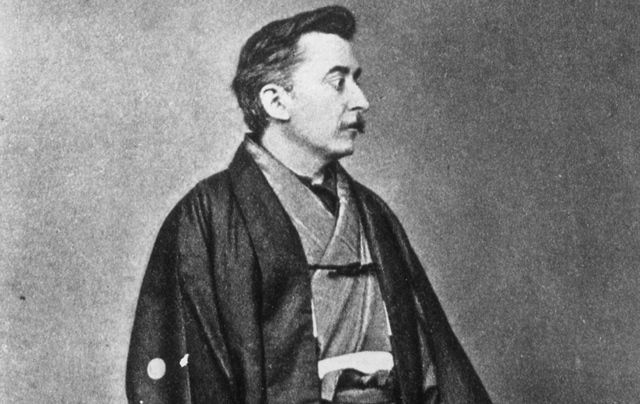 Irishman Lafcadio Hearn took something revolutionary with him on his voyage to Japan in 1890: an open mind. It was at the tail end of the great era of global exploration and he was a very unique kind of migrant.

Most Victorian travelers of the period tended to project their racial hang-ups on the people and to exoticize the place, but Hearn, who grew up in Dublin, had the patience and the sensitivity (he made his career as a journalist) to step back and simply let the people reveal themselves.

This being Japan, it took a little time. Along the way, he learned to speak the language fluently, and he took a Japanese wife with whom he had four children. It was as if he were living his life for the biographical film that is certain to be made soon.

In Ireland, we really ought to know much more about him than we do.  During his 54 years of life Hearn produced 30 celebrated works, including the masterful Kwaidan: Stories and Studies of Strange Things, which later became the basis of the classic 1964 horror film by director Masaki Kobayashi.

Like W.B. Yeats and Lady Gregory in Ireland, Hearn recorded the folk tales and ghost stories of his adopted homeland, achieving a sort of Homeric stature in the process. His skill was to write literary versions of traditional tales, bringing them to an international audience.

Bon Koizumi is the Lafcadio Hearn Memorial Museum director in Matsue and the great-grandson of Hearn himself.  In the 60th anniversary year of the start of Irish and Japanese diplomatic relations, he’s on an international mission to alert Ireland and the Irish diaspora of the unexpectedly strong cultural connections between our two island nations.

In particular, he’s in New York to gauge the interest of the Irish literary and arts community in an exhibition of Hearn’s life and works.

“I would like to discuss the possibility of marking the 150th anniversary of Lafcadio Hearn’s arrival in the United States as an immigrant in an exhibition scheduled for 2019,” he tells the Irish Voice.

“In this trip to New York we have visited the Japan Society, the Morgan Library (which has several of Hearn’s manuscripts and letters) and we have also spoken to the American Irish Historical Society. We feel an exhibition would provide a great opportunity to introduce Lafcadio to American audiences.”

Most of the stories Hearn collected in Kwaidan (which means supernatural tales) are his translations from old Japanese texts, but mirroring the Celtic Revival, he also listened to the ghost tales told by Japanese farm hands and other locals.

As it is so often with our literary heroes, Hearn had to go abroad to achieve literary prominence. He was a near contemporary of Wilde, Yeats, Shaw and Joyce (as a current exhibition at the Lafcadio Hearn Memorial Museum in Matsue demonstrates) and he has attained major prominence in Japan, yet his achievements need wider attention in Ireland and the United States.

Like the Irish, the Japanese share an abiding interest in the rhythms of the natural world, a tendency to let nature assert itself fully in landscaping, an interest in the supernatural, and a placid outer surface that can conceal a passionate nature underneath. It’s a cultural echoing that was noticed by Yeats over 100 years ago.

“It’s a little more challenging to make this happen in New York because we don’t yet know the organizations here, but we have received a lot of interest and we are beginning to work with them,” Koizumi’s wife Shuko tells the Irish Voice.

The opportunities for readings, talks, lectures, screenings and performances are self-evident, so what is needed now is a steward in New York to pull the elements together in an imaginative and comprehensive format.

At a time when scholars in both Ireland and Japan can fear that we are forgetting our own traditions in a new virtual world of iPhones and computer games, it’s time to find every advocate of our dual traditions to strongly make the case for them.

Lafcadio Hearn matters because his story is an Irish one. He made the emigrant’s journey and suffered the Tir na n’Og forfeit known to all Irish travelers: once you step off the homeland it starts to forget you.

So, it’s an irony worth reflecting upon that it was folklore and tales of lifelong hauntings that would eventually make his name. We should make every effort to welcome him home.