Malta, dotted with no shortage of Irish bars and Irish expats, is a blend of the familiar and strange that makes each day a discovery. 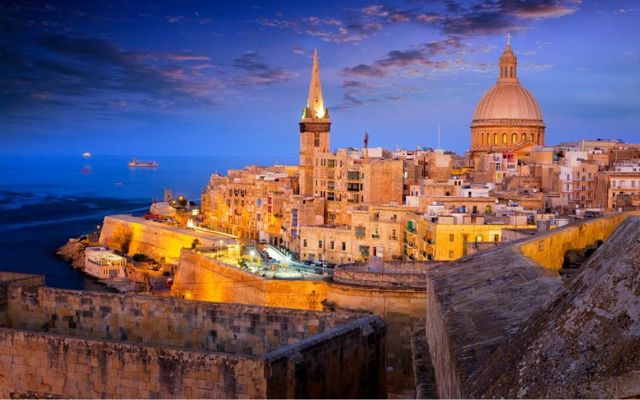 If you have never been to Malta, can I tell you – by way of recommendation – that it's of the most pleasantly surprising places I've ever visited?

Like Ireland, Malta has endured centuries of colonial invasions but, like Ireland, it has somehow maintained its own distinctive character throughout, although its unique charms are now supplemented by a dizzying range of international offerings.

If Queens in New York was a sparkling island in the Mediterranean, you'd get a sense of the diversity that makes modern Malta the most densely populated country in the European Union (like Dublin, cranes are everywhere on the skyline now, giving a sense of expansion and development).

Many young – and this surprised me, tanned - Irish barmen and barwomen already work at the dozens (yes, dozens) of Irish bars on the island, alongside their colleagues and friends from just about every other nation on earth. But I haven't seen so many Irish congregate in one place outside of America and Australia, it was a delight.

You can have a full and impressively authentic Irish breakfast in pubs like The Dubliner if you so choose, and after days of sweet continental ones, I finally did so choose. It was hearty and rewarding fare, a welcome little bit of the homeland far from home.

At night, the streets of the capital city Valletta come to life with live music, fine dining, cafes, and of course bars and clubs tailored to every visitor and interest. On just about any street you can order Middle Eastern or European or Asian (from Filipino to Indian) or African food and be assured what you're served will be authentic and delicious, because the people cooking it are often immigrants to the island themselves.

Outside of Queens, I have never found another place on the planet that served first-rate international food this diverse and this consistently good, for affordable prices, but with the added attraction of the much higher European food standards (sorry, America).

The Malta tourism hashtag is #MoreToExplore and, for once, it's truth in advertising.

On any given night, you can choose between signature Italian pastas and pizzas, fancy French dining, Middle Eastern kebabs, falafel, shakshuka, Greek dishes, Indian curries and so much more. Make time to stop by Is-Suq Tal-Belt - the Valletta Food Market for an impressive list of international eats.

I even encountered two Marks and Spencer food halls where, to my astonishment, I could pick up some chocolate biscuits as though I'd headed out for a stroll in London.

There are few places in the world where you can mix and match global cultural offerings like this, this effortlessly, so I was instantly smitten. 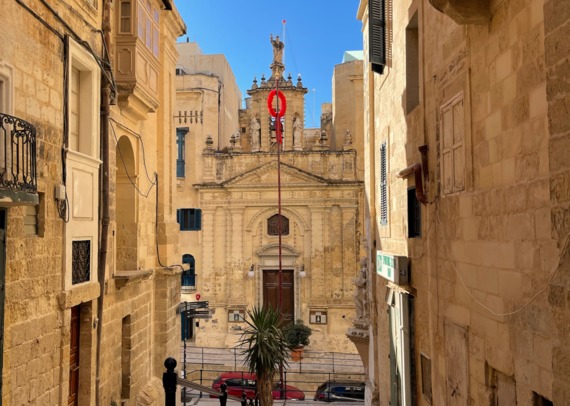 On my first night in Valletta, I stepped out into the warm evening air and heard, as though someone planned it, late 60s and early 70s David Bowie songs coming from a nearby pub. This isn't something that happens as often as I might like it to so I was instantly captivated. "The Man Who Sold The World," "Moonage Daydream," "Queen Bitch" and on were the siren songs that led me to pull up a seat for a fun night out in a truly welcoming venue. 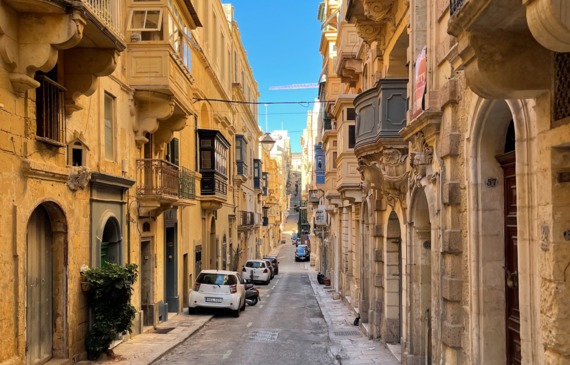 Valletta, Malta's imposing capital city, is part fortress – courtesy of the Order of the Knights of St. John and later the British Empire - and part Baroque folly, an impressive mix of architectural aims and outlooks. Walking through its picturesque UNESCO World Heritage-protected streets can feel a bit like being on a film set or maybe ambling through the grandest museum you have ever visited.

The oldest island in the Mediterranean, with 7000 years of human history, it boasts the oldest free-standing architecture in the world and some of the most imposing defensive fortifications. Ancient, medieval, and modern architecture all clamor for a hearing, making a day out here one of the most absorbing you'll ever take.

But it's the simple street-level surprises that really made me fall hard for this island nation. Oh look, I kept saying, here's something I love (an Irish bar selling well poured Guinness next to something new to me, a Maltese bakery serving world-class baking). That heady blend of the familiar and the strange made each day in Malta a discovery – and there is so much to be discovered. 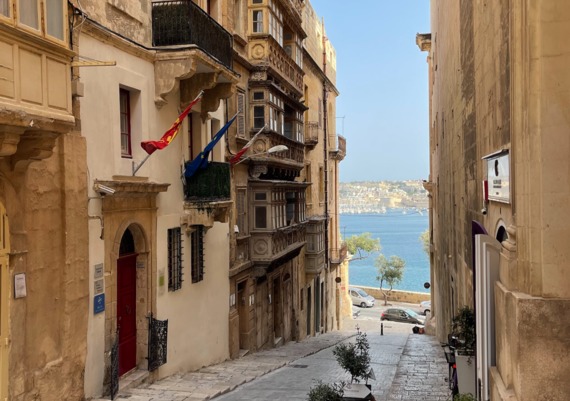 As a gay man, I already knew that Malta has the most progressive LGBT laws in Europe and offers a special outreach to LGBTQ visitors. In fact, it comes in at number one in the Europe Rainbow index, which is ahead of Ireland in its welcome.

You don't have to worry about segregated bars, clubs, pubs, restaurants, or cafes because you'll be welcome in all of them, which makes repeat visits mandatory.

I was in town for Pride 2022 and I have never seen one that was more joyously folded into the life of the city or more sure of its welcome. Marchers were also dancers having an impromptu outdoor concert with their friends and neighbors, although there's no doubt that the political point of Pride was a consideration too – I saw many signs in solidarity with LGBT around the world.

Given it's welcome and its progressive laws, it's no wonder that Malta will be the location for Euro Pride in 2023. The island is a masterclass in the power of inclusivity and the tourism boom that comes with that is smart economics. 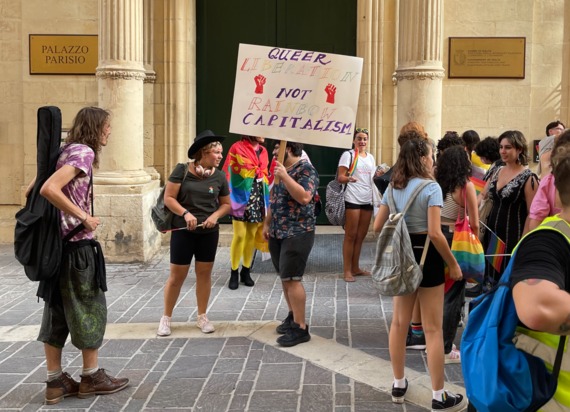 An island surrounded by the deep blue Mediterranean sea, you're going swimming, so pack for that. The sandy beaches are located on the north of the island, but the deep blue rocky beaches also give you ample opportunity to dive into the clear waters (bring a snorkel for the best views). Malta, Gozo, and Cominio all offer wildly varying experiences and many beaches have Blue Flag status, so expect to spend long, languid days there. 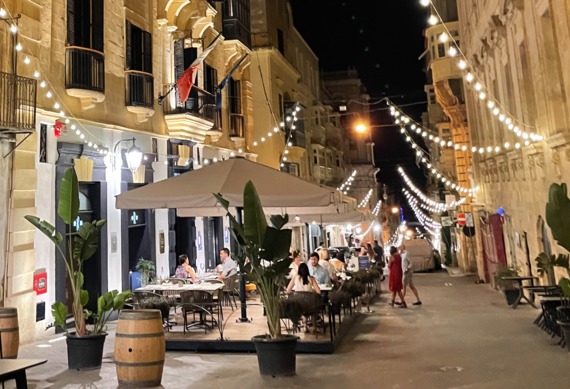 Malta's hotel offerings are all first rate but first-time visitors should seriously consider the five-star Rosselli – AX Privilege in Valletta for its unbeatable location, which places you in the heart of the downtown scene, but at a discreet remove.

The only five-star in Valletta, it's a luxury hotel set in the former 17th-century home of a noble goldsmith where modernity (waterfall showers, colored marble, and warm wood furnishings) and history live in effortless Maltese unity.

Hotel Rosselli offers three excellent dining options, including the impressive Michelin-starred fine-dining restaurant Under Grain, helmed by local celebrity chef Victor Borg who brings great joy (always trust a happy chef) and great flavors to this elegant and quietly innovative dining experience. With its attentive staff and international references, it will be one of the most rewarding highlights of your trip.

Visitors to Malta should sample some of the local savory pastry known as pastizzi, which are usually filled with ricotta or lightly curried peas. Diamond-shaped and featuring the flakiest pastry you will ever eat, can you say you have been here without having one? 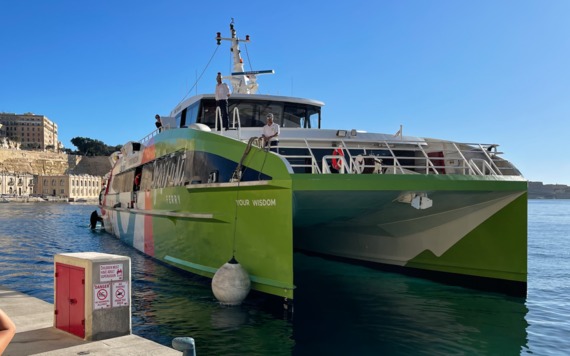 Time at leisure takes on a whole new meaning in Malta. You could spend the day as I did taking the Fast Ferry from Valletta to Gozo to visit the neolithic Ggantija Temples (there are TukTuks waiting on the ferry landing dock run by the English-speaking Yippee company that you can hire, very affordably, for a tour of the smaller island) and the outdoor locations used in "Game Of Thrones" (these include dramatic swimming spots).

My guide to the island of Gozo, Trudy Grech, was an ideal companion who brought the history of the island to life in a fun and richly informative way, so for a deeper understanding of the island – and an insiders take on where best to visit and even dine - I strongly encourage you to book a tour with her. 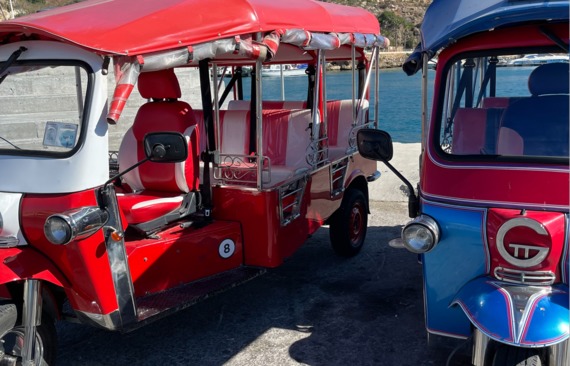 After a day's exploring, I stopped off at the Xerri l- Bukkett restaurant in Qala for fine Mediterranean food in a venue featuring wrap-around views of Malta, Comino, and the famous Blue Lagoon. It was the perfect end to a fun day trip

Back in Valletta that evening, I had dinner in the delightful and chic Aaron's Kitchen, hosted by celebrity chef Aaron Degabriele. Featuring a mouthwatering fusion of Maltese and Italian cuisine, the restaurant (do call ahead for a reservation) serves pasta, grills, fish, and shellfish daily with a changing list of local specialties, homemade dessert, and an extensive international wine list.

Getting to Malta from any point in Europe is impressively easy. Direct flights on Air Malta will take you from many major European capitals, including Dublin and Rome. 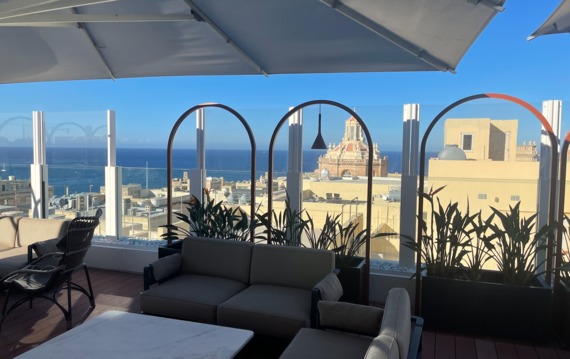 If you're traveling from Dublin, the change from cloudy grey skies to blue Mediterranean sunlight is a pick-me-up in itself and will be a welcome sign you're nearing the island, which is about as close to Africa as it is to Sicily.

Your heart will lighten as you make the final approach and, like Ireland, you can be assured you're about to make many new friends, including the thousands of the sun-seeking Irish themselves, who have taken an enduring shine to this matchless island.

Malta is sunny year-round, so my advice is to check out the Visit Malta website, plan your itinerary, then book and take off to the warm weather as soon as you can, your spirit will thank you for it.