Blasphemy charge dropped but why is Ireland in the dark ages on some issues?

Stephen Fry might have escaped a $27,000 fine, but the inane blasphemy law that got him in trouble is still on the books in Ireland. 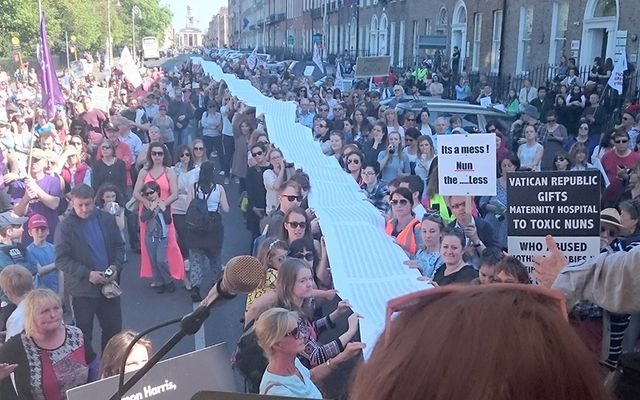 A petition against the Sisters of Charity running a new maternity hospital is delivered. Parents for Choice in Pregnancy and Childbirth / Facebook

Ireland's long voyage out of de facto theocracy is far from over.

This week our commentariat were up in arms over our archaic blasphemy law, which was invoked and then yesterday just as embarrassingly retracted against popular British author Stephen Fry, for an appearance he made on Irish television in 2015 where he flatly denied the existence of God.

Under Ireland’s Defamation Act of 2009 (yes, that’s 2009 and not 1609) anyone who publishes or utters blasphemous material anywhere in the nation “shall be guilty of an offense.”

Thanks to Irish lawmakers that now includes saying that you’re not particularly keen on the idea of a supreme being. Despite Fry’s last minute escape yesterday, speaking your mind can still put you in danger of an eye-watering €25,000 fine.

Fry avoided a modern day inquisition in Dublin after Irish police “failed to find enough outraged people” offended by his remarks. But that means that the only thing standing between him and a successful prosecution were numbers, because the law is still on the books.

Having remained conspicuously silent on almost every other aspect of the long fight for the separation of our church and state, it was welcome to see commentators get into a lather over blasphemy at last.

I’m certainly glad of their late to the ball participation this week, but it’s been clear for some time that our government is at least two decades behind the Irish public when it comes to separating public and private morality, religious belief and the clear and careful lines that need to be drawn between them.

Where was all the media outrage when our elected ministers voted to make standing for prayer mandatory at the start of government business each day? Ask yourself, when you think of a mandatory call to prayer do you think of Dublin or Dubai?

Last week the motion for mandatory standing during the Dail prayer (including 30 seconds set aside for silent reflection afterward) was carried with the huge majority of 97 to 18, with just 19 abstentions. Again this happened in 2017, last week, not in 1932. Privileging religion before conducting the affairs of state is current in both Dublin and Dubai.

mandatory prayer at the Dail. police investigations about blasphemy. what is happening in this country

Absurdly, Irish ministers who refuse to stand may now face disciplinary action. Perhaps they can all wave to Stephen Fry from their respective stocks?

The damage this disingenuous buffoonery does to our international standing cannot be overstated. After years of good tourism press, Fry’s shocking inquisition this week has made the global news cycle and made us look like a blinkered Father Ted-style backwater. It has made the news cycle from Belfast to Beijing.

For years now it has been clear to everyone except our all-too-cautious-government-ministers that the relationship between the clergy and the country has profoundly and irrevocably changed.

This fact was made clear last month when news that Ireland’s new National Maternity Hospital (NMH) would ultimately be owned by The Sisters of Charity (who had run notorious Magdalene Laundries) set off a firestorm, with over 104,000 people signing an online petition calling for them to relinquish it.

The uproar was a reminder that religion for most Irish citizens now is a private matter, not a public one. In a secular nation we should not be compelling our public representatives – or anyone else – to participate in religious ceremonies or blessings that they may not wish to or even believe in.

So how to explain this increasingly insupportable disconnect between the lessons of our recent history and the actions taken by the elected representatives of our state?

It’s not as if they haven’t received sufficient notice of the problem. In 1972 the Fifth Amendment to the Constitution of Ireland deleted the “special position” of the Catholic Church in the life of our state.

It was signed into law on January 5, 1973. It means we have no state church. By extension it should also mean that we have no reason to compel others to publicly participate in our religious observances either.

With our legacy political system, where our political candidates are essentially groomed from birth to 'do the state some service,' they usually know they will be returned to their posts in even in spite of their performances. That makes for a certain cynicism, a hardness of mind that can weather most political storms.

So there are very few things that can intimidate Irish government ministers, but clearly the debate over church and state still does, so we must ask them why? Why in 2017 are they still governing as though the cultural and political map still read 1983?

Who exactly, if not the Irish public (who have repeatedly supported the complete separation of church and state from Irish affairs), is actually calling the shots here?