Guns can haunt their makers too: The troubled story of Sarah Winchester

The tragic Winchester House story of rifle heiress Sarah Winchester, who invested millions into the mansion in an attempt to ease her conscience over the deaths caused by her family's creation. 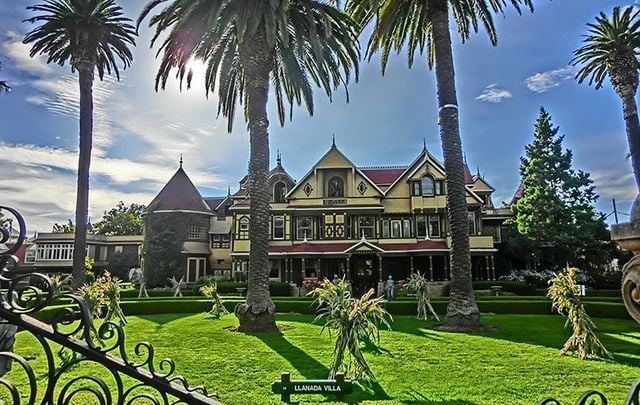 The tragic story of Winchester House and its owner Sarah Winchester. Public Domain/WikiCommons

I'm going to tell you a ghost story now. One that has the unusual quality of being true.

It started in 1886 in California when a troubled young woman named Sarah Winchester, the only heiress to the vast Winchester rifle fortune, purchased an eight-roomed farmhouse in San Jose, California.

Sarah’s husband William had died of tuberculosis six years earlier in 1880, leaving her with an approximately 50 percent ownership of the famous Winchester Repeating Arms Company, giving her an income of $1,000 a day (roughly the equivalent to $22,000 a day in today’s money).

It was an unspeakably huge fortune, but instead of bringing her contentment it brought her only misery.

On the advice of a psychic, Winchester refused to let building stop on her mansion

Early in her marriage, her only child died after just a few weeks of life. She fell into a depression after that.

Soon she began to consult psychics. According to legend, Sarah came to believe she was cursed. It probably didn’t help her mental state when a Boston-based psychic informed her that the entire Winchester family was cursed by the spirits of all the thousands of people killed by their rifles.

When you think about it, it makes a strange kind of sense. Those popular rifles had the power to kill multiple victims in rapid succession and that’s exactly what they did. Winchesters took so many lives, was it so hard to imagine that one or two of their ghosts could vow revenge for it?

The psychic that Sarah consulted in Boston reportedly told her that if construction on her house in San Jose ever stopped, she would immediately join her husband and infant daughter in death. So the builders worked around the clock, seven days a week, 365 days a year, for 38 years.

The South roofs of Winchester House.

It sounds like something that would only happen in a fairy tale, but bizarrely it’s all true. The Winchester mystery house, as it came to be known, is gigantic, sprawling mansion set over six acres featuring half furnished rooms that lead on to other hidden rooms, featuring doors that open into walls and staircases that climb all the way to the ceiling.

If you ever needed proof that you can in fact have too much money, this would be one of the first examples you could point to.

Sarah Winchester invested millions of her $20 million fortune on the construction of the house, in the irrational belief it would prolong her life. So the Winchester house really is a mad house in the true sense of the word, and it also became a labyrinth in which she hoped her conscience would get lost.

Above all the house was a visible expression of her inner turmoil.  It was built without a master plan, which means it became whatever she wanted on a given day, even when it conflicted with her desires of the day before. No ever one says stop to someone that rich, here or anywhere, after all.

Guns can have devastating effects on their owners, too

I visited her house as a teenager. It made a huge impression on me.

I didn’t care for the high Victorian furnishings or the architectural styles. I marveled at the errors of judgment that saw the whole sprawling mess seem to devour itself.

Of course, I was just one more fee-paying tourist who came to gawk at the sad and superstitious mania of an old broad who couldn’t hack the way her family had made its fortune. But there was something about this garish old pile that made it memorable in a way that I couldn’t shake.

Listening to the guide talk I began to feel sorry for the woman who had lived there.  It was awful really, all this relentless, pointless construction.

East side of the Winchester House.

Meanwhile, the Winchester rifle itself kept improving. In fact, it was considered so effective it became known as “the gun that won the west.” You may infer that it dispatched the enemies of advancing freedom, in their thousands.

So as the company became more profitable Sarah sunk more and more of its profits into the bottomless hole that was the Winchester mystery house, perhaps only dimly aware that in doing so she was trying to salve her stricken conscience.

Guns do in fact kill people, she discovered, and the people who make them can be the most haunted people of all.

Have you ever visited Winchester House? Let us know your thoughts in the comments section, below.