"Bloomsday in Brooklyn" is an annual literary pub crawl, now in its eleventh year, that features lively readings from James Joyce in celebration of his magnum opus Ulysses. 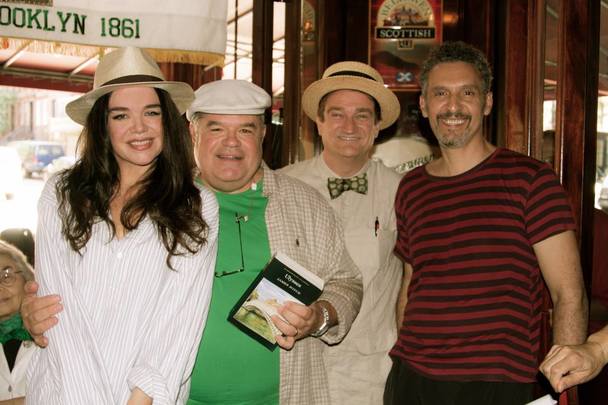 This year, because of the pandemic, you can join the belated celebration as an online adaptation aptly titled "Bloomsday Lock-In."

That's right, the party's going online and it features some major names. Among the 50 actors from the stage, screen, literature and the music industry are John Turturro (Batman, Barton Fink) Patrick Bergin (Sleeping with the Enemy), Ian McElhinney (Game of Thrones, Derry Girls, Dr. Who) Aidan Gillen (Game of Thrones, The Wire), comedian Colin Quinn (Saturday Night Live), Spider Stacy (The Pogues), Barry Ward (Dating Amber, The End of the F***King World), Billy Carter (The Plot Against America, Titanic), Olwen Fouere (She Will, The Survivalist) and the renowned Irish poets Theo Dorgan and Paula Meehan.

The idea for the lock-in was suggested by actress and playwright Laoisa Sexton, who told IrishCentral, “Like everyone else I was stuck inside thinking of things I could do.  Bloomsday is coming up, so I pitched the idea of a lock-in to Declan Walsh, a former Dublin Youth theatre alum.”

“Declan had brought me on board before to read at his annual Bloomsday even in Brooklyn, produced every year by The Friendly Sons of St. Patrick. So I suggested we put together a film piece to go out for Bloomsday, he loved the idea and  ran with it, the Friendlies have all chipped in to pay for production costs.”

It's called the Bloomsday Lock-In because of the current situation. It will also raise much-needed money for charity. One of the Friendlies, Kevin Brooks, passed away from Covid-19 recently. He was the musical director of the live events over the years and so the film is being dedicated to him.

The charity being supported is the Chips Soup Kitchen in Park Slope, which feeds over 350 meals a day to the homeless and shelters homeless pregnant women for up to a year.

“Some notable participants joined our cast like John Turturro, a Brooklyn native who had also taken part in the live event a few years ago,” says Sexton. “Aidan Gillen, Patrick Bergin, Spider from The Pogues and even an appearance by Shane Mc Gowan himself will happen along with appearances by Irish poets Theo Dorgan and Paula Meehan and a cast over sixty actors from stage and screen from all over the world.”

In keeping with Joyce's modernism, this will be a modernist take on Bloomsday says Sexton, adding that it's been challenging to direct the entire production via Whatsapp!

“I know people can be very devout now when it comes to Joyce, and I don't pretend to be a Joycean, but I have read it and I love it, especially all the wordplay. As an actress, I have performed in many Bloomsday celebrations and I used to marvel at how it was approached, so this time, rather than a bunch of white men in straw hats looking down at books with their glasses on the end of their noses I thought let's make it more modern. James Joyce is proper punk rock in all ways.”

“He was so utterly rejected by the Irish and Ireland, his heart must have been broken by that, truly I mean just imagine he went to Dublin to get Dubliners published and they turned him down! Dublin turned Dubliners down! Madness!”
Nothing he did was ever celebrated by the Irish and yet now they claim him as a lost son adds Sexton, but really he was more of the world than of Ireland in the end. “And this incredible book he wrote with a broken pencil and a gammy eye, now it's celebrated all over the world.”

Like Joyce, Sexton will center the female at the heart of this production. “I used to hate going to Bloomsday events where they would throw Gerty and Molly on at the end like some sort of gimmick when really it's all leading to that, isn't it? Aren't all good stories about returning home?”

Read more: There’s no place in the world like Dublin on Bloomsday

The Bloomsday Lock-In will broadcast online on Sunday, June 21 at 3P.M. To view just log in HERE.