Ireland is among more than 100 nations calling for an independent inquiry into the worldwide COVID-19 response. The proposal is set to be discussed at the World Health Assembly, which convenes today, May 18. 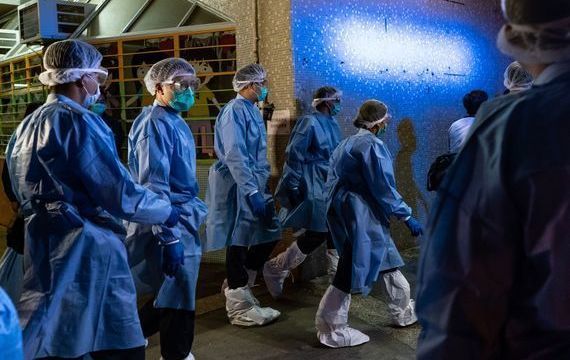 122 nations are calling for an independent inquiry into COVID-19. Getty Images

Ireland is among more than 120 countries that are co-sponsoring a proposal calling for an independent inquiry into the COVID-19 outbreak.

Australia first proposed an international inquiry into the COVID-19 pandemic in April.

The motion will be discussed during the World Health Assembly, the decision-making body of the World Health Organization, which will convene virtually beginning today, May 18, for two days.

A total of 122 members of the Assembly have co-sponsored the proposal, including the UK, Canada, New Zealand, and the 27 members of the European Union.

The proposal calls for "a stepwise process of impartial, independent and comprehensive evaluation" into the COVID-19 pandemic and, if passed, the proposal will "review experience gained and lessons learned from the WHO-coordinated international health response to COVID-19."

The entire proposal can be read here. The United States is not listed on the document as a supporter.

The Australian Government is hoping for a unanimous vote in favor of the proposal but only needs a two-thirds majority for the proposal to pass. With 122 nations already in favor, the proposal needs just seven more supporters to pass at the Assembly.

Australian Foreign Affairs Minister Marise Payne said she was very encouraged by the support for the proposal and hailed the proposal's imminent victory as "a win for the international community and Australia".

Although the motion does not specifically mention China, it calls to investigate and identify "the zoonotic source of the virus and the route of introduction into the human population."

The proposal has strained relations between China and Australia, causing China to place tariffs beef and barley worth around $1 billion. The Australian Government labeled the tariffs an attempt at economic coercion.

China, however, has claimed that the Australian tariffs are unrelated to the proposal as international pressure for an inquiry into the COVID-19 pandemic mounts.

"You should not view them together from a political angle," a Chinese Foreign Ministry spokesperson said at a press briefing last week.

While China was initially reported to be in opposition to the proposal, it has emerged today that the country supports an inquiry, but wants it led by WHO and only after the crisis has ended.

Addressing the virtual conference today, Chinese President Xi Jinping said: “All along we have acted with openness, transparency and responsibility."

He added: “We also need to continue supporting global research by scientists on the source and transmission routes of the virus.

“China supports the idea of a comprehensive review of the global response to Covid-19 after it is brought under control, to sum up our experience and address deficiencies.

“This work should be led by science and professionalism, led by the WHO and conducted in an objective and impartial manner.”

Read more: After this coronavirus pandemic, China must be held accountable