A 26-year-old woman harassed and Irish American family in update New York, cyberbullying them due to the young baby's skin condition. 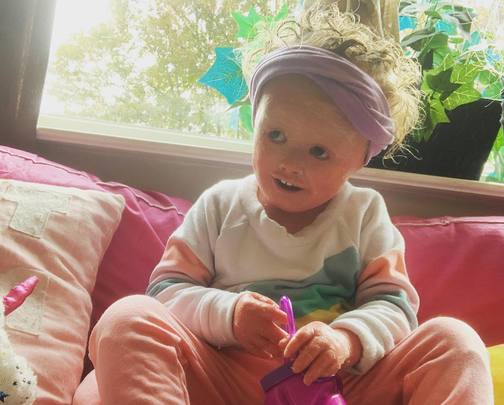 Anna Riley (2) received online abuse from this woman for a year. Now the accused has been charged with a hate crime. Hope for Anna / Facebook

A 26-year-old woman harassed and Irish American family in update New York, cyberbullying them due to the young baby's skin condition.

A 26-year-old woman from Long Island, New York, has been arrested for harassing the family of a two-year-old girl with a genetic disorder. She is accused of sending them threatening messages on Facebook, Instagram, via their GoFundMe page and mailing letters to their family home.

Krista Sewell, from Melville, from Long Island, was arrested on Thursday on charges of aggravated harassment, as a hate crime.

The victim in the case is Anna Riley, a two-year-old girl who suffers from harlequin ichthyosis, a condition that causes skin abnormalities and affects breathing and movement. Children with this condition are born with hard, thick skin covering most of their bodies that cracks easily.

The abuse of baby Riley and her family who live in Ulster County, in upstate New York, started a year ago.

The child's mother Jennie, posted to Facebook following Sewell's arrest. She said she refused for her daughter "to hide from her disorder with some sort of shame about having different skin."

"One day she will have to go out on her own to face the world and I will do everything in my power to make sure she has the confidence that is needed. I hope so much that people learn there is someone on the other side of their keyboards and it’s not ok to send hateful messages."

Writing about receiving the first message, Jennie told NBC "Although I knew there was a possibility for negativity I never expected to receive the messages that were sent to me. Over the past year, I have fought a battle I never thought I would fight and I felt fear no mother should feel."

"I want to thank the New York State Police and the Ulster County Sheriff’s Department for their diligence, dedication and most of all their compassion. I hope we can all learn from this and understand the importance of teaching our kids kindness and acceptance of visible differences"

After the arrest, she posted on Facebook "Maybe we can bring cyber-harassment to the forefront and teach people that a real person is always at the other end of your comments and messages."

Here is the NBC report: