The Tara Skryne Preservation Group is urging visitors not to tie items to the branches of so-called 'Wishing Trees' at the Hill of Tara. 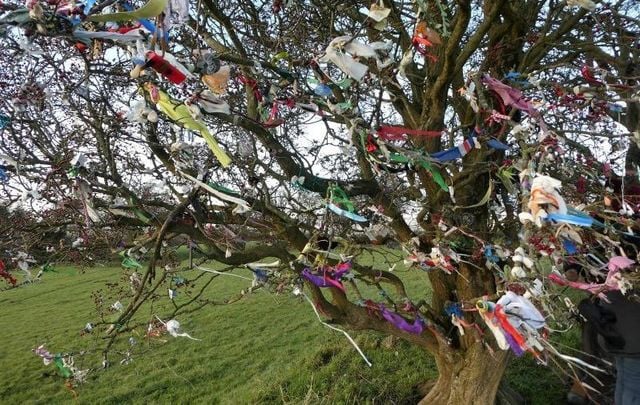 After a Wishing Tree at the Hill of Tara in Co Meath toppled due to the weight of items tied to its branches, a volunteer organization is urging visitors to be more cautious when visiting the site.

The Tara Skryne Preservation Group, a volunteer organization who works to preserve the area of the Tara Skryne Valley in Co Meath, shared a video of the fallen Wishing Tree on June 24:

The price of tying non bio degradable "offerings" to trees. One of the Wishing Trees on the Hill of Tara has toppled over, the burden of human "prayers" lying on the ground along with it, roots exposed. Its heartbreaking to see this after all the warnings we tried to give about this practise, but still they kept on coming, destroying the trees. The message from the Trees is Loud and Clear, "WE DONT WANT YOUR BURDENS!". Will they listen now? :(

The group said: “[This is] the price of tying non-biodegradable "offerings" to trees. One of the Wishing Trees on the Hill of Tara has toppled over, the burden of human "prayers" lying on the ground along with it, roots exposed. It's heartbreaking to see this after all the warnings we tried to give about this practice, but still, they kept on coming, destroying the trees. The message from the Trees is Loud and Clear, "WE DONT WANT YOUR BURDENS!". Will they listen now?”

What are Wishing Trees?

In a Facebook post, the Tara Skryne Preservation group said: “The Wishing Trees were long regarded by locals as a portal to the Faery Realm."

"One would stand between the two trees and make a wish for something new to enter into your life, a new partner, job, etc. No tying of anything to the trees, no damage was done to them. What has been happening since approximately 2012 is that people are using these trees as if they were Rag Trees, or, as they are known in Scotland, as Clooties Trees, a totally different practice."

"Rag Trees are an old Irish tradition still to be found at Holy Wells where people would attach slips of cotton or linen (biodegradable) along with their prayers to rid the body of disease, for example. In accordance with Sympathetic Magic,  as the cloth degrades, the ailment would leave the affected person."

"Unfortunately for the Wishing Trees, which are not Rag Trees, neither do they stand at a holy well, this custom has been hijacked and the resultant build up of plastics, etc and the sheer weight and amount of it has caused a sail effect in high winds. One of the already weakened trees has toppled over."

Please help us to educate people about the damage they are doing to our trees and biodiversity by hanging non bio degradable items on trees. Traditionally the old custom of Rag Trees involved the tying of a cotton rag to a tree, usually an Ash tree at a well, and as the cloth degraded so did the disease or illness as it left the body. These are not Ash trees, nor are they at a well, nor indeed are they even rag trees. These Hawthorns are known locally as the "Wishing Trees" and the custom here was to stand between the trees and place a hand on each, then make make a wish for something new in your life eg a job, partner etc. These trees are struggling for survival under the weight of plastic and metal which only becomes heavier when it rains. Please share this video and help us to save the trees. Thank you. Video credit Carmel Diviney

Read More: Too many visitors ruining the Hill of Tara, the ancient site of the High Kings

John Farrelly, who works with the Preservation group, told the Irish Independent: "The trees can't carry all this junk which gets heavier in rain and people have been hammering coins and penetrating their protective layer, leaving them open to poisoning from fungal diseases.”

"Another fairy tree on the hill is also in bad condition and we have to act now to save the others."

Farrelly further told The Irish Mirror: “These hawthorns are lone bushes which have survived growth in exposed areas. According to folklore, if a tree or bush was able to withstand the elements and grow unaided in these areas, there had to be some sort of magical force helping them.”

“People believed that lone bushes were helped to grow by the fairies or other spiritual beings as a reminder that we are not alone on this earth - we are not the masters of everything.”

“It would be a shame to see them die.”

Carmel Diviney, who also works with the Tara Skryne Preservation Group, told The Irish Mirror: “Tying a small piece of bio-degradable rag is one thing but hammering coins into the truck is another.”

She added: “We are also asking the Office of Public Works if they can help in the matter."

"Most tour guides and buses are on our side but you will see some tours actively tying stuff to the trees and to these we plead, Stop!”

The group has scheduled a clean-up event for later this month.

Have you ever visited a Wishing Tree in Ireland? Let us know in the comments