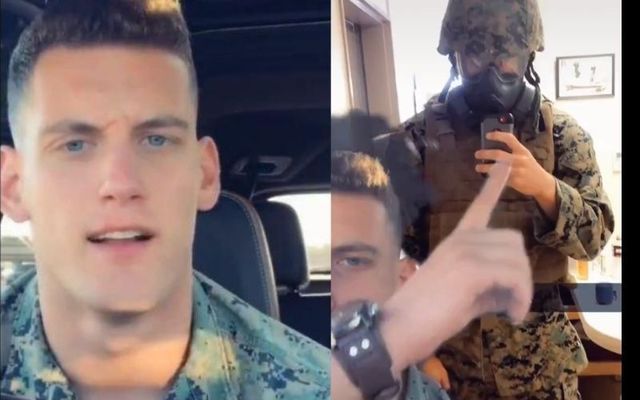 A US Marine has gone viral after he went on a rant about people who refuse to wear face masks during the COVID-19 pandemic and compared wearing a mask to a store's dress code.

Timmy Byrnes, a 24-year-old aviation supply specialist with the Marine Aviation Logistics Squadron, has just returned to the US following a two-year tour in Japan and was dismayed that a large number of American citizens refused to wear a mask.

He took to social media site Tiktok to post his rant and voice his concerns.

"To you ... geniuses who are like, 'This is America, I have the freedom not to wear a mask' — it's called a dress code, Kevin!

"The 7-11 also requires you to wear a shirt so I don't have to explain to the kid I'm babysitting why a crackhead-looking Santa has bigger t****es than his ma,"  he said in the viral video.

Byrnes compared wearing a face mask to wearing a shirt in a 7/11, arguing that no one complains about a store's dress code infringing their freedom in normal circumstances.

The video has been viewed more than five million times across Facebook and Twitter since it was posted earlier this week.

The Marine condemned people who complained about wearing masks by comparing wearing face masks to some of his army gear, including a gas mask and a desert scarf.

He additionally said that people who refused to wear face masks would ensure that America remained in lockdown.

"I've been overseas for two and a half years — Japan, not anywhere f***ing dangerous, I'm a POG — and I finally get back to America just in time for it to shut down!" he complained.

"And you idiots are making it shut down longer! It's a piece of cloth," he concluded.

Wear a mask, you dummy pic.twitter.com/s4hevUZnSt

The issue of wearing a face mask has been politically divisive in the US, with US President Donald Trump arguing for months that people wearing masks were making a political statement against one.

The President stated multiple times that he would not wear a mask but has recently performed a u-turn, tweeting out an image of himself wearing a black face mask with the presidential seal alongside the caption, "Many people say that it is Patriotic to wear a face mask when you can’t socially distance. There is nobody more Patriotic than me, your favorite President!"

We are United in our effort to defeat the Invisible China Virus, and many people say that it is Patriotic to wear a face mask when you can’t socially distance. There is nobody more Patriotic than me, your favorite President! pic.twitter.com/iQOd1whktN

Face masks help to prevent the spread of COVID-19 by preventing people who may not know they have the virus from spreading it to others. It is still important to practice social distancing and cough into a tissue or your elbow while wearing a mask.