Upswing in opposition to Trump's wall at his Irish golf course

It’s not the Mexicans the Trumps want to keep out of Ireland, it’s the sea itself. 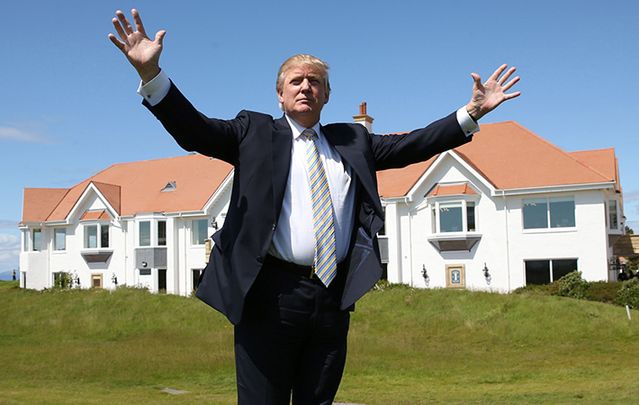 Trump at another one of his golf course properties in Scotland.

President Trump’s efforts to build a wall on the parameters of his Co. Clare golf course “as a matter of urgency” have encountered sustained local opposition.

The resort in Doonbeg has already scaled back plans for a 200,000 ton barrier to a more modest 49,400 ton version. The original wall was set to stretch 1.7 miles but a new proposal seeks permission for one half a mile long. Clare County Council’s request for further information after the original plan was submitted left managers at the resort worried that it would take years to get approval.

Opposition to the project has also increased: whereas 39 people objected to the original plan, the revised plan has now seen over 40 individuals file concerns. The Department of Arts, Heritage and Rural Affairs have warned that sufficient justification for the wall has yet to be given.

The proposal warns that left unprotected from the sea, holes 1, 18 and 19 will disappear due to coastal erosion and that eventually the entire hotel and golf course could be threatened by the encroaching Atlantic ocean.

Whilst President Trump and the First Daughter Ivanka have resigned as executive directors of the resort, the President’s two older sons, Eric and Don, Jr. remain on the board that are hoping to get the wall given the green light.

Fintan Kelly from An Taisce - an environmental organization and objector to the plans - said the resignation of President and Ivanka Trump had no effect on the project as far as he could work out.

“There may be new Trumps in charge and a new application, but the negative impacts here haven’t changed,” he told the Irish Times.

“The conservation of sand dunes internationally has proven that they are more cost-effective at protecting the coast than hard sea defences. The proposal is not supported by the scientific consensus that sea walls are not compatible with sand dune conservation.”

Trump’s Irish wall building plans have also been met with rejections and resistance because the Doonbeg coast is the natural habitat of an endangered snail species, the the narrow-mouthed whorl snail (or Vertigo angustior for the snail experts out there).