The New Titanic will never take to the water but remain as the focal point of a new Chinese theme park located 900 miles inland. 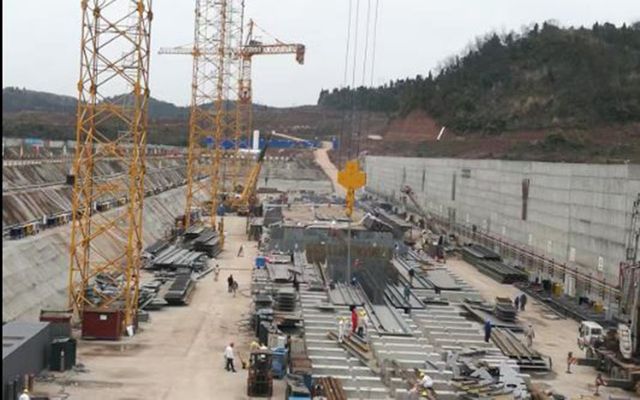 The New Titanic is under construction in Daying county, Sichuan. Twitter/NewTitanic

Construction is underway on a full-sized replica of the Titanic which is set to become the focal point of a new amusement park in China. The New Titanic revealed the first photos from the project earlier this week after several months of construction work on a ship that will never reach the open sea.

While the original Titanic was sold as “unsinkable”, the New Titanic will never get to test its legs as instead of ferrying passengers between continents, the replica will act in an immersive Titanic experience within a theme park 900 miles inland.

It is being assembled in the landlocked Chinese province of Sichuan and on completion visitors to the park will be able to board the Titanic and walk around the various rooms as if they were on the ship itself in 1912.

The New Titanic is under construction in Daying county, Sichuan. Here are the latest photos of construction site. pic.twitter.com/3xz3SSCfEe

Everything from the ballroom, theater, cabins and swimming pool will be recreated while banquets and games will be held to give a more genuine, true-to-life experience. It has even been reported that a simulation booth is being considered to give visitors the opportunity to experience what it was like to be on the Titanic when it was hit by an iceberg and sank.

While the project was first announced in 2014, many delays pushed back the start date for construction until December 2016. With a ceremony to mark the beginning of the project from Qixing Energy Investment Group taking place late last year, it appears that the 296-meter replica may be completed. The project is believed to be costing upwards of ¥1bn ($2.2 billion).

"When the ship hits the iceberg, it will shake, it will tumble," said Seven Star CEO, Su Shaojun.

New Titanic design expert Curtis Schnell said “We’re trying to get as close as we can."https://t.co/1Uvk6Trm2i

"It will capsize and water will come in. We will let people experience water coming in using sound and light effects, and LED light effects. They will think: 'The water will drown me. I must escape for my life.'"

The New Titanic project has so far reached a later stage than that of the other ambitious Titanic replica being floated around by Australian billionaire Clive Palmer since 2013. The rather eccentric holiday resort mogul originally set a sail date in 2016 for the “Titanic II” but the project appears to be dead in the water.

In 2015, it was announced that the long-awaited working Titanic II would be held off until 2018, two years after work was initially to be complete on the historic vessel. Work on the ship, however, has still not begun with some claiming that the Australian billionaire behind the project may have cash-flow problems. The owner of shipping company Blue Star Line and a mining magnate who earned his millions in real estate, Palmer is said to be investing $500 million in the ship.