Thomas Cook and Joseph Feeney agreed that they would split the Powerball Jackpot if either one bought the winning ticket. 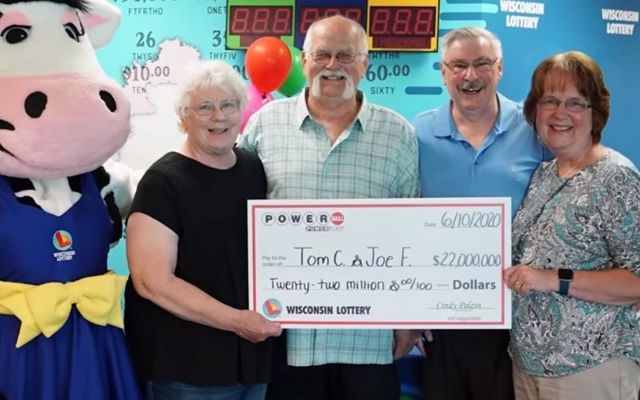 Two men in Wisconsin have split a whopping $22 million lotto jackpot thanks to a handshake agreement made almost 30 years ago.

Thomas Cook and Joseph Feeney, two long-time friends, agreed in 1992 that if either of them ever won the Powerball Jackpot, they would split the winnings evenly between them, regardless of who bought the ticket.

It was Thomas Cook who bought the winning ticket for June 10's Powerball Jackpot, scooping the $22 million prize.

Cook made good on the 28-year-old handshake agreement between the old friends and called Feeney immediately after he realized he had the winning ticket.

"A handshake's a handshake," Cook said, explaining why he called his friend.

"He called me and I said, 'are you jerking my bobber (fishing float)?" he told the Wisconsin Lottery YouTube channel.

While neither friend has any grand plans to spend their huge winnings, Cook has already handed in his notice at his job and retired.

Both men plan to use the money to spend quality time with their families.

"I can't think of a better way to retire," Cook said.

The two men have decided to take a cash option of about $16.7 million instead of the original $22 million paid in annual installments. After state and federal taxes are deducted, both Feeney and Cook will walk away with a cool $5.7 million.

Cook confirmed that he has bought two more Powerball tickets since winning the jackpot.

The Wisconsin Lottery congratulated the two friends on their big win, paying tribute to the strength of their 28-year-old pact.

"The power of friendship and a handshake has paid off. I'm thrilled for them—their lucky day has arrived," a Wisconsin Lottery spokesperson said.

The Irish Embassy in the USA also tweeted about the story, posting an old Irish saying: "Is fear cairde ná ór" - friends are worth more than gold.