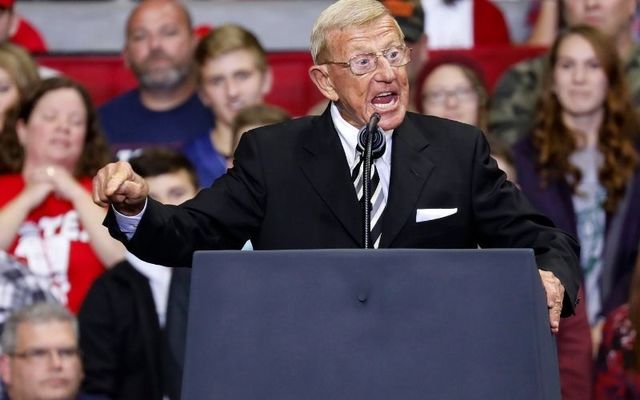 US President Donald Trump has announced that former Notre Dame head coach Lou Holtz will receive the Presidential Medal of Freedom shortly after the football coach made a speech supporting Trump at the Republican National Convention.

Holtz will now receive one of America's highest civilian awards after Trump described him as "an incredible leader" and a good friend.

The former Notre Dame coach caused controversy during August's RNC when he attacked Democratic Nominee Joe Biden over his religious views, claiming that Biden is a "Catholic in name only."

Holtz faced widespread criticism for his comments and Notre Dame, where he coached for nine years and won a national championship, distanced itself from his comments, criticizing its former coach for questioning someone's religious views.

Trump made no reference to Holtz's speech when announcing the award, pointing instead to his leadership skills and the significant number of prominent coaches that wrote letters expressing their support for Holtz.

"I think I’ve received letters from every football coach, almost, in the nation. That’s a little exaggeration, but some of the greats. Nick Saban wrote a letter, Coach O ... and Urban Meyer wrote a beautiful letter," Trump said when announcing the award.

"So many of the other great, legendary coaches. Not only coaches, people in sports and people in life. Even great political people recommending Lou for the Presidential Medal of Freedom."

Trump did not say when Holtz's ceremony would take place but hinted that it would happen in the near future.

The US President has awarded several prominent sporting figures with the prestigious award, including Tiger Woods, Roger Penske, and Jerry West.

Holtz, meanwhile, is a two-time college championship winner and was inducted into the college football hall of fame in 2008 after retiring in 2004.

He coached Notre Dame to a 12-0 season when the school won the national championship in 1988.

He has been an outspoken supporter of the Republican Party and encouraged colleges to return to competitive sports during the COVID-19 pandemic, taking a similar stance to Donald Trump.