TCD researcher have discovered a patch of land in an ancient valley on Mars that appears to have held water. 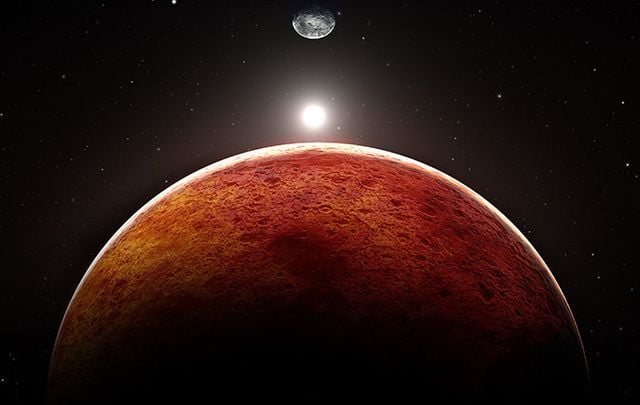 TCD researcher have discovered a patch of land in an ancient valley on Mars that appears to have held water. iStock

Researchers from Trinity College Dublin have discovered a patch of land in an ancient valley on Mars that appears to have held water in the not-too-distant past. In doing so, they have pinpointed a prime target to begin searching for past life forms on the Red Planet.

The findings have just been published in Geophysical Research Letters, by Dr Mary Bourke from Trinity, and her colleague, Professor Heather Viles, from the University of Oxford.

Dr Bourke said: “On Earth, desert dunefields are periodically flooded by water in areas of fluctuating groundwater, and where lakes, rivers and coasts are found in proximity. These periodic floods leave tell-tale patterns behind them.”

“You can imagine our excitement when we scanned satellite images of an area on Mars and saw this same patterned calling card, suggesting that water had been present in the relatively recent past.”

In a remote sensing study of the Namib Desert, the researchers had previously noted these patterns -- ‘arcuate striations’ -- on the surface between migrating sand dunes.

Fieldwork subsequently showed that these arcuate striations resulted from dune sediments that had been geochemically cemented by salts left behind by evaporating groundwater. These dune sediments later become relatively immobile, which means they are left behind as the dunes continue to migrate downwind.

Dr Bourke added: “Following our work in Namibia, we hypothesize that on Mars, similar arcuate striations exposed on the surface between dunes are also indications of fluctuating levels of salty groundwater, during a time when dunes were actively migrating down the valley.”

“These findings are hugely significant. Firstly, the Martian sand dunes show evidence that water may have been active near Mars’ equator -- potentially in the not-too-distant past. And secondly, this location is now a potential geological target for detecting past life forms on the Red Planet, which is important to those involved in selecting sites for future missions.”