Karzan Sabah Ahmed, his wife Shahen Qasm, and their eight-month-old daughter Lena died after motorist Jonasz Lach entered the M6 motorway on the wrong side of the road and crashed into their car on Thursday evening. 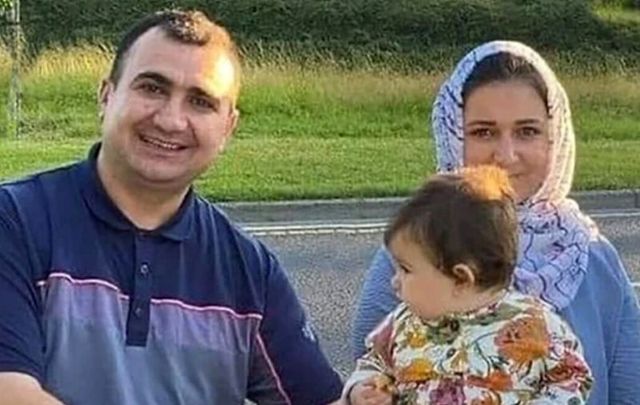 Tributes have poured in for a Kurdish couple and their eight-month-old child after they were killed in a horrific three-car collision in Galway last week.

Karzan Sabah Ahmed, his wife Shahen Qasm, and their daughter Lena died after motorist Jonasz Lach entered the M6 motorway on the wrong side of the road and crashed into their car on Thursday evening. All four were pronounced dead at the scene outside Ballinasloe in County Galway.

The family moved to Ireland in 2017 and were getting ready to move to Carlow for work, where Ahmed had been offered a job as a lecturer.

Co-founder of Kurdish Art Nergez Group Ireland Hiwa Wahab told RTÉ Morning Ireland that the family arrived in Ireland on a student visa and said that Ahmed was about to complete his Ph.D. in architecture at NUI Galway.

He added that the family had been viewing a property that they hoped to rent in Carlow on the day of the accident last week.

"He had a plan to move to Carlow. On the day of the accident, he was there to view a property to bring his family to Carlow and start a new life there," Wahab told RTÉ Morning Ireland.

Zhyan Sharif and Philip Phelan, the founders of the Kurdish Irish Society in Dublin, described Ahmed as a "real family man" who "adored" his wife and baby.

They said that the family loved living in Galway and added that they always maintained contact with the Kurdish community in Ireland.

"They loved Galway and all of its inhabitants, and the amount of messages on social media is a tribute to this," Sharif and Phelan said.

"Karzan had a great connection with the Kurdish families in the Galway area and maintained his passion for being Kurdish. He was trilingual and he spoke Kurdish, English, and Arabic, he also had a love for reading and music and to travel."

His wife Qasm was a trained engineer and moved to Ireland with her husband in 2017. The couple were both from Erbil in Kurdistan and previously lived in Plymouth, England, where Ahmed completed a master's in architecture.

Sharif and Phelan said that the repatriation of the family's remains to Erbil was "being dealt with at the moment".

In a statement, NUIG described Ahmed as a highly regarded researcher and said that it was deeply saddened by "such an untimely loss, in such tragic circumstances".

The university extended its sympathies to Ahmed's family and friends.

Meanwhile, members of Galway's Polish community said that they had been left "numb" by Thursday night's collision, which also claimed the life of Polish immigrant, Jonasz Lach.

Lach, who moved to Ireland 15 years ago, was a married father-of-two who worked in a shop in Portumna and was well-liked among the Galway community.

"It still feels so shocking, I’m finding it really difficult to think of the words to describe what I’m feeling. Any time I had an interaction with him, he was a good guy. I never had trouble or a problem with him," a member of Ballinasloe's Polish community told the Irish Times.

Fianna Fáil TD Anne Rabbitte said that Portumna had been "numbed" by the tragic collision.