What you need to know about the solar eclipse?

Solar eclipse 2017: Everything you need to know from the time, map, to where to bag your solar eclipse glasses on August 21 for the Great American eclipse. 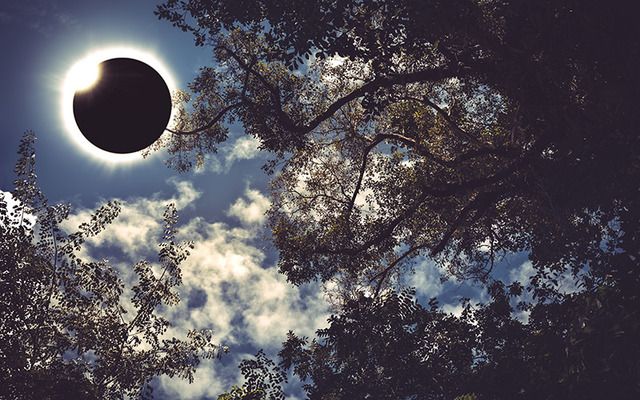 The first solar eclipse in the US since 1979 will take place today (Aug 21). Preparations are well underway nationwide to accommodate the millions expected to travel to be in the line with the total eclipse, dubbed the “Great American eclipse,” the first total solar eclipse to be viewable solely in the US.

Solar eclipse glasses and solar eclipse maps are flying off the shelves as excited viewers get themselves ready. Here’s everything you need to know before the solar eclipse occurs.

What is a solar eclipse?

A solar eclipse occurs when the sun, moon, and earth line up with the moon between the earth and the sun, blocking the sun from view and causing a shadow on Earth. Of course, the sun is much larger so the planet is not plunged into total darkness as light can still reach the Earth.

A total solar eclipse is witnessed by those on Earth who are directly placed along the Path of Totality, the path around the Earth that lies directly beneath the moon with the sun directly opposite. Those along this path will see the moon completely cover the sun and be able to view just corona (atmosphere around the sun) for approximately two minutes. The last time the lower 48 states saw a total eclipse was in 1979.

Those who are not along the path of totality will simply witness a partial eclipse, where all of the sun will not be covered by the moon. The degree to which the sun will be darkened depends on where in the world you will be.

The 2017 total solar eclipse will take place on August 21.

Where can you view the total solar eclipse 2017?

To see a total eclipse, where the moon fully covers the sun for a few minutes, you must be in the path of totality, a relatively thin ribbon, around 70 miles wide, that will cross the U.S. from West to East.

Within the US, the path of totality will stretch from Lincoln Beach, Oregon, to Charleston, South Carolina. Millions of tourists are expected to venture to a point along this 14-state route to witness the full eclipse.

What time will the August solar eclipse take place?

Over the next hour and a half, it will cross through the states of Oregon, Idaho, Wyoming, Montana, Nebraska, Iowa, Kansas, Missouri, Illinois, Kentucky, Tennessee, Georgia, and North Carolina and South Carolina.

The total eclipse will end near Charleston, South Carolina at 2. 48 p.m. EDT.  From there the lunar shadow leaves the United States at 4.09 EDT.  Its longest duration will be near Carbondale, Illinois, where the sun will be completely covered for two minutes and 40 seconds.

NASA has also supplied this handy grid for those hoping to witness the almost once-in-a-lifetime event.

Read more: An Irish monk made note of one of the first recorded eclipses 1,505 years ago today

Why is this being called the Great American eclipse?

Can I see the solar eclipse if I’m not based in the US?

You can still experience the Great American eclipse even if you’re not based in the US or along the path of totality, but unfortunately, it will just be some form of a partial eclipse. Everyone in North America, as well as parts of South America, Africa, and Europe, will see at least a sliver of the moon blocking out the sun.

How can I prepare for the solar eclipse?

It’s always best to remember that it’s an absolutely terrible idea to stare directly at the sun, even if the sun is being blocked out somewhat by the moon. You can check with local science museums, schools, or astronomy clubs to see if they are selling special solar eclipse glasses but there are other ways to protect your eyesight while not missing out on the fun.

The glasses must have the ISO reference number 12312-2 to ensure they’re the correct ones and you may want to put in your order quick. American Paper Optics in Bartlett, Tennessee are already shipping out 500,000 pairs a day and believe they will have sold 100 million glasses by the time the eclipse rolls around.

You can also check with the American Astronomical Society (AAS) which has provided a list of solar filters that can be purchased. And there is the ol pinhole protection technique.

The pinhole protection technique involves turning with your back to the sun and crossing your finger over one another so they form a waffle shape with your fingers slightly apart. The sun should be able to shine on the ground in a grid formation through your fingers, revealing the Sun’s crescent shape during a solar eclipse. It is safe to look at the sun while the complete total eclipse is occurring and only then and once the two minutes are up and once again starts to appear, you should go back to the pinhole technique to prevent any damage occurring.

Please note that sunglasses are definitely not strong enough to protect our eyes in this instance.

A total solar eclipse is cause when the sun, moon and earth line up in their orbits. Image: iStock.

Can I travel to the path of totality?

Of course you can travel to get a better view of the eclipse, but you should be warned that many have already made plans before you and accommodation may be hard to come by. Airbnb rentals along the route are currently going for as much as $1,000 a night. You can expect plenty of gridlock on the roads as well as cell phone blackouts because of the sheer mass of people traveling to the states where the total eclipse will occur.

Many of the 14 states along the path of totality are preparing for the event as they would any national emergency, ensuring that emergency teams will be available on a medium other than their cell phones. They're planning for the cell system to go down due to the sheer number of people who will be trying to use the system along the narrow path of totality. Port-a-potties are being bought up by the bucket load (apologies) to ensure that facilities are available for people.

If you are making the trip, it is advised to bring plenty of food and drink with you in case you end up stuck in hours of highway traffic.