Titanic II could set sail as early as 2022

After a financial delay, construction has resumed on Titanic II with plans for a 2022 maiden voyage. 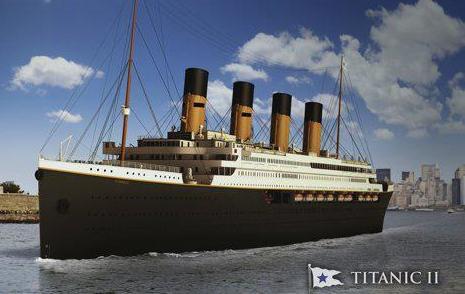 ‘Titanic II,’ a replica of the ill-fated luxury liner RMS Titanic, could set sail as early as 2022.

Following some financial troubles, construction has resumed on Titanic II. The ambitious plans for the replica ship were initially announced in 2012 by Australian billionaire Clive Palmer.

This week, Palmer - chairman of Blue Star Lines that is building Titanic II - announced that the European headquarters for Titanic II will be moved to Paris from London citing Brexit concerns.

"It is of little use having a European headquarters outside Europe," Palmer said in a statement in on Monday.

"The decision will mean we won't open our European office until March 2019", he continued, "with Paris being ideally placed to suit the company's needs".

If all goes according to plan, Titanic II will sail its maiden voyage in 2022 from Dubai to Southampton.

From Southampton, the replica ship will follow the same route originally laid out for the original RMS Titanic to New York City.

However, after New York, Titanic II will embark on a worldwide tour, according to Palmer.

“The ship will follow the original journey,” said Palmer, “carrying passengers from Southampton to New York, but she will also circumnavigate the globe, inspiring and enchanting people while attracting unrivaled attention, intrigue, and mystery in every port she visits.”

“For over a century Titanic's legend has been powered by mystery, intrigue, and respect for all she stood for. Millions have dreamt of sailing on her, seeing her in port and experiencing her unique majesty. Titanic ll will be the ship where those dreams come true."

The replica ship will cost an estimated $500 million to build. Construction of the ship will take place in China, not Belfast, where the original RMS Titanic was built.

While most of the ship will adhere to the original Titanic’s designs, modern updates will include a hull that’s welded rather bolted, modern navigation systems, and, of course, an appropriate number of lifeboats.

Titanic II will be able to accommodate 2,400 passengers and 900 crew members. Mimicking the original, passengers will be divided into first, second, and third class.

In 1912, the “unsinkable” RMS Titanic famously struck an iceberg on its maiden voyage and sank, killing 1,503 of the 2,208 people on board. The ship is infamously known for having too few lifeboats to accommodate the entire passenger roster.

In 1997, the ship’s tragedy was immortalized in the James Cameron directed blockbuster ‘Titanic’ starring Kate Winslet and Leonardo DiCaprio.

Tickets are not yet on sale for the maiden voyage of Titanic II.

Do you want to sail on the Titanic II? Let us know in the comments!