Dennis Hutchings, 80, is charged with the attempted murder of 27-year-old John Pat Cunningham in County Tyrone in 1974. 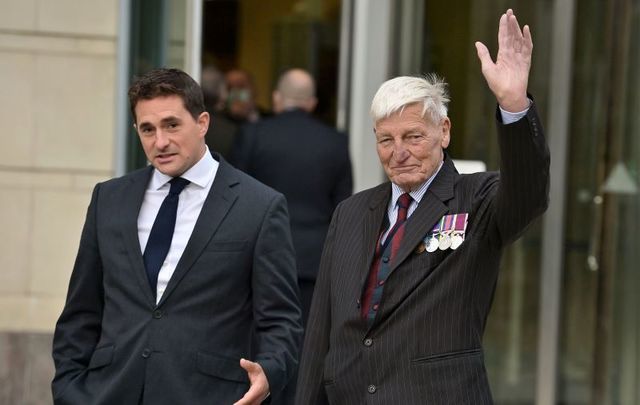 The trial of former British soldier Dennis Hutchings over a Troubles-era killing has been adjourned because of his ill health.

Hutchings, 80, is charged with the attempted murder of 27-year-old John Pat Cunningham in County Tyrone in 1974.

Cunningham, who had the mental age of a child, was shot dead as he ran away from a British Army patrol near Benburb. Those who knew him state that he had a deep fear of soldiers.

Hutchings. a veteran of the Life Guards regiment, is also charged with one count of attempted previous bodily harm with intent. He denies both charges.

Defense Barrister James Lewis QC informed the Belfast Crown Court of Hutchings' ill health just before proceedings in the non-jury trial were due to commence on Friday morning.

He informed Mr. Justice O'Hara that his client would not be able to attend the court as he was in hospital.

"I regret to say he's been taken unwell and is presently in hospital," Lewis told the Belfast Crown Court on Friday morning.

"And in those circumstances, my lord, I don't think it's possible for us to proceed today."

Prosecution barrister Charles McCreanor QC agreed that there was no alternative but to adjourn the trial until Hutchings was fit to attend.

"It would seem the court has absolutely no option whatsoever but to grant the adjournment," he told the court.

Mr. Justice O'Hara agreed to adjourn proceedings until Monday morning when he could be updated on the issue.

"This is unfortunate, but I hope very much that for Mr. Hutchings' sake and for everybody's sake that he is treated and is fit to attend the trial again on Monday."

Hutchings' trial had been ongoing for two weeks before Friday's development, while Mr. Justice O'Hara had been due to hear evidence from a police witness later on Friday in relation to the shooting of Cunningham.

No one has been charged in connection with Cunningham's death because it cannot be determined who fired the fatal shot.

The prosecution has conceded that it cannot determine who among Hutchings' patrol fired the shot that killed Cunningham as he ran toward his home.