After a teen was engulfed in flames at a north Belfast bonfire, UUP leader Doug Beattie has called for community engagement and bonfire regulations. 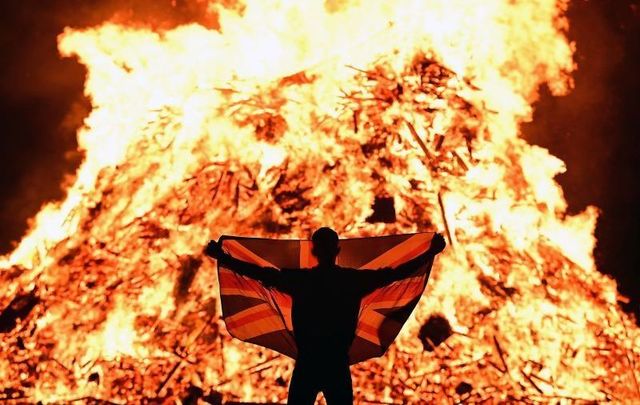 July 11, 2021: A loyalist celebrates with a Union Jack flag as the 11th Night bonfire which marks the beginning of the annual protestant 12th of July celebrations is lit in Portadown, Northern Ireland. Getty Images

A 17-year-old male is reportedly in an induced coma in a Belfast hospital after becoming engulfed in flames while at a bonfire in Ballysillan in north Belfast ahead of July 12, forcing some politicians to speak out.

The teen has burns to 40 percent of his body and face, the Belfast Telegraph reports.

A video of the terrifying incident has circulated online in which shocked bystanders can be heard yelling “drop and roll!” after the teen became engulfed in flames.

“He tried to throw a canister of petrol at the bonfire but held onto the can and the flames just shot back at him,” one eyewitness told the Belfast Telegraph.

“It was a freak accident, a lot of people ran to help him but you could see straight away the burns were really bad.”

A spokesperson for the Northern Ireland Fire and Rescue Service (NIFRS) confirmed that they received a call on July 11 in relation to the incident at Silverstream Crescent in Ballysillan.

NIFRS said that between 6 pm on July 11 and 2 am on July 2, they saw a “significant increase in bonfire-related incidents” compared to 24 incidents in 2020.

Between 6pm 11 July and 2am 12 July 2021, NIFRS has received a total of 153 emergency calls and has been mobilised to 105 operational incidents.

PSNI Superintendent Nigel Henry said: “Police received a report at around 12:30 am that a male had sustained burn injuries. As a result of the incident, he sustained burns to his face and body. He remains in hospital for his injuries.

“Our enquiries are continuing to establish the circumstances surrounding the incident.

“We are aware that there were a number of people in the area at the time of the incident, so we would appeal to them to come forward to assist with our enquiries.

“We are also aware of social media footage that has been posted online in relation to this incident. We would ask that it is not shared, but to contact police with any information they might have.”

Police are appealing for information following an incident at north Belfast on Monday 12th July. pic.twitter.com/dFfjrKwVuX

On Tuesday, Doug Beattie, who was recently named the new leader of the Ulster Unionist Party (UUP) in Northern Ireland, said on BBC's The Nolan Show that he saw the "appalling" and "sickening" images of the teen running from the bonfire.

"Everybody has to look at this and ask themselves, is this worth it? That any of our young people can end up in this way? There was a number of near-misses over the 11th Night bonfire period," Beattie said.

"I think it's fair to say that bonfires are a fair expression of identity and culture, they happen around the world - in Spain, in Norway, certainly in Great Britain on Guy Fawkes night.

"We need to put that in place to make sure we keep our community safe."

Beattie would not agree that those who constructed the Ballysillan should "hang their heads in shame." He did acknowledge that there should be an investigation into the matter.

Beattie later said that there must be "community engagement" surrounding the bonfires, and added: "The reality to all of this is quite simple, that some of these bonfires are not safe and if they're not safe, there needs to be mandatory regulations to stop them putting peoples' lives in danger.

"We need to look at this and we need to come up with a set of legislations that work for the community and work for the safety of everybody, whether they go to watch this or whether they are a bonfire builder. There has to be something."

Beattie said he worked for three years with the Flags, Identity, Culture and Traditions (FICT) commission, which delivered a paper with recommendations last year that has yet to be considered by the Northern Ireland Executive. Beattie said he could not remember if the report explicitly recommends mandatory regulations on bonfires.

The day prior on The Nolan Show, DUP leader and Northern Ireland First Minister Sir Jeffrey Donaldson said: “I would like to work with bonfire organisers and see if we can come up with even a voluntary code at this stage and encourage people to take responsibility.”