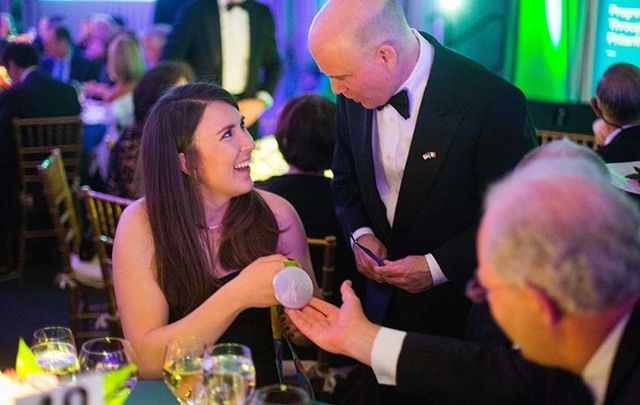 The Ireland Funds hosted its 42nd Annual New York Dinner Gala, on Thursday evening, May 4, in New York City, with 1,000 guests in attendance.

A $1 million funding grant for the Irish Arts Center, which has undertaken a mammoth $65 million expansion project on Manhattan’s West Side, was announced at the dinner by CEO Kieran McLoughlin.

There were delays for many people reaching the venue due to a security crackdown in the Chelsea Piers area as President Trump was speaking at an event nearby.

The event raised a total of $2.65 million for the support of hundreds of Irish charities and causes. The Gala is the largest of the 150+ events held globally by The Ireland Funds. Over the course of the dinner’s 42-year history, it has raised over $550 million.

The honoree on the evening was Jim O’Donnell, Global Head of Investor Sales and Relationship Management at Citi. O’Donnell was recognized for his business acumen and philanthropic commitment. Consul General Barbara Jones was also recognized for her great work and advocacy on behalf of the Irish community in New York during her tenure.

The 1,000 guests hailed from the spheres of business, the arts and politics attended the Gala, which was chaired by Daniel Keegan, Co-Head of Global Equities at Citi.

"Tonight's dinner is a phenomenal success," said John Fitzpatrick, Chairman of The Ireland Funds America. "Through their generosity, our members and donors are ensuring that significant support is going to help worthy causes not only in Ireland but right here in New York City. Their philanthropy is making a difference in people's lives and we are so grateful to them for making this happen."

“The Irish diaspora have truly come through for Ireland and Irish America tonight,” said Kieran McLoughlin, Worldwide President & CEO of The Ireland Funds. “We see the impact of our donors’ generosity on the ground. It is wonderful that they are showing such belief in and concern for Ireland and its future.”

The Iris Arts Center grant will help triple its capacity and serve more than 120,000 patrons a year with a state-of-the-art contemporary performance space for theater, dance, music, installations and special events.

The Ireland Funds and its guests recognized the recent passing of Ambassador Dan Rooney, who co-founded The Ireland Funds with fellow Pittsburgh businessman Tony O’Reilly in 1976. Rooney was also Chairman of the Pittsburgh Steelers football team and served as US Ambassador to Ireland. Those gathered, including members of his family, reflected on his profound generosity and the impact he had on countless people across Ireland which now lives on through the work of The Ireland Funds.

The Ireland Funds is a global philanthropic network established in 1976 to promote and support peace, culture, education and community development throughout the island of Ireland, and Irish-related causes around the world.