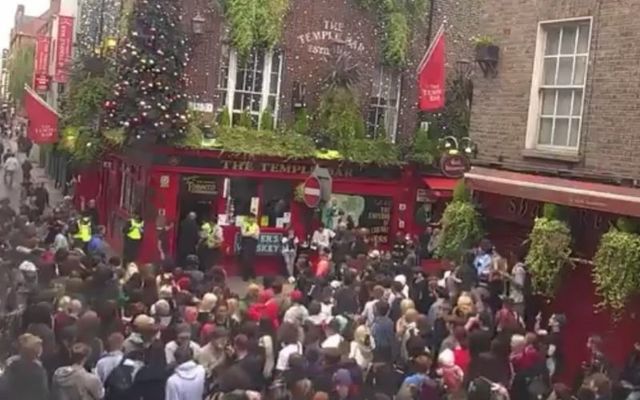 Protestors gather outside the Temple Bar pub in Dublin on Thursday. @adamlikesthings Twitter

Hundreds of skateboarders staged a protest outside a well-known Temple Bar pub on Thursday night after two teen skateboarders were allegedly assaulted outside the venue.

Protestors gathered outside the Temple Bar pub on Thursday evening, banging skateboards against the cobbled street and calling on pub staff to "come out and say sorry". Protestors also booed and jeered customers who entered and exited the establishment during Thursday's demonstration.

The alleged assault took place outside the venue on Monday night, with several eye-witnesses claiming that the two teenage skateboarders were assaulted by at least four security guards who work at the pub.

Footage circulated on social media appears to show the two teenagers - who are aged 13 and 16 - being punched, kicked, and dragged through the street.

Protest organizer Evan Fogarty, who shared the footage on social media, said that the teenagers had done nothing wrong and said that protestors simply wanted bar management to apologize for the incident.

"All we want is somebody to come out and say sorry. It is not much to ask for," Fogarty told the Irish Times on Thursday evening.

“Come out and say sorry” outside The Temple Bar pub.

The nicest protest of all time. pic.twitter.com/hZcBliOaO4

Fogarty previously criticized the Temple Bar on Instagram over the incident and accused the security guards of dragging one teenager inside the pub and assaulting him.

"It’s one thing hitting a Child but Kicking them while they're on the ground before dragging them into the pub for a hiding," Fogarty wrote on Instagram.

Aoife Keogh, 17, who witnessed the incident on Monday night, told the Irish Times that the brawl kicked off after the security guards teased the two teenagers over their skateboards.

There was a heavy garda presence at Thursday's protest, which passed peacefully. No arrests were made at the demonstration, while protestors dispersed without incident, a garda spokesperson told The Journal.

Meanwhile, Gardaí have confirmed that they are conducting inquiries into Monday's incident.

"Gardaí are aware of a video circulating on social media of an incident in the Dublin 2 area," a Garda press officer said.

"Gardaí are conducting inquiries into this matter at this time."