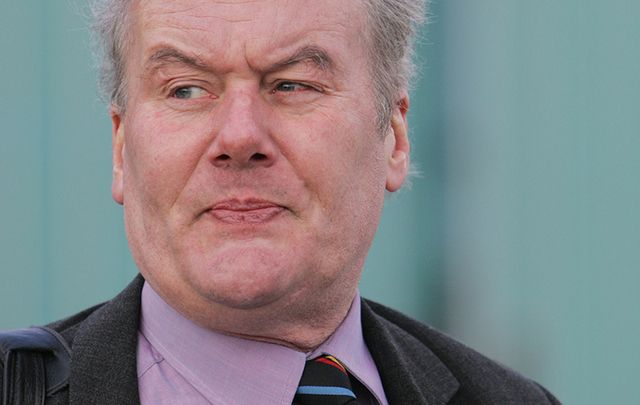 Kevin Myers, a leading right-wing columnist for the Irish edition of the London Sunday Times, has been fired following the publication of anti-Semitism and bigoted remarks about women.

Myers is one of Ireland’s best-known journalists, well-known for his hatred of Irish Republicanism though he was once a sympathizer of the Republican movement.

About the 1916 celebrations last year he wrote:

“The imbecilic equation of Irish Republicanism (is) Murder + failure = celebration.”

The Rupert Murdoch-owned newspaper has apologized for the Sunday, July 30 column, which attacked female staff at the BBC who are seeking to close the gender pay-gap and receive equal salaries to their male counterparts.

The column highlighted Jewish women among the group seeking higher pay, implying nothing more could be expected from them given their Jewishness.

“Only one woman is among the top 10 best-paid BBC presenters. Now, why is this? Is it because men are more charismatic performers? Because they work harder? Because they are more driven? Possibly a bit of each.”

Saying men were simply better, he wrote, “Most of all men tend to be more ambitious, they have that grey backed testosterone powered hierarchy-climbing id.”

He said the BBC had the “wholly erroneous” idea that staff “were equal and deserved equal pay.”

Myers noted two of the “best-paid women” were Jewish.

“I note that two of the best-paid women presenters in the BBC — Claudia Winkelman and Vanessa Feltz, with whose, no doubt, sterling work I am tragically unacquainted — are Jewish... Jews are not generally noted for their insistence on selling their talent for the lowest possible price...”

The Kevin Myers piece was abhorrently anti-Semitic. But let our furor also extend to his grossly sexist & misogynistic views. BOTH vile!

Myers in the past has used the term “bastards” about children born out of wedlock and accused their mothers of giving birth in order to claim benefits.

“How many girls - and we’re largely talking about teenagers here - consciously embark upon a career of mothering bastards because it seems a good way of getting money and accommodation from the State? Ah. You didn’t like the term bastard? No, I didn’t think you would.”

In 2009, writing in the Irish Independent he denied the Holocaust:

"There was no holocaust... and six million Jews were not murdered by the Third Reich. These two statements of mine are irrefutable truths."

He claimed that while Nazis did kill Jews in massive numbers, the numbers for the death camps had been hugely overestimated

Amazing - the Irish Independent has just deleted a Kevin Myers piece entitled "I'm a holocaust denier..." EIGHT YEARS AFTER IT WAS PUBLISHED pic.twitter.com/aC4bMaDIyT

In 2005, in The Irish Independent he attacked aid for Africa. The headline read, “Africa has given nothing to the world except AIDS.”

In his latest outburst, he claimed “the PC traitors who run BBC News and current affairs… have stifled and corrupted all useful debate on national identity, immigration and race, thereby doing irreversible damage to British society.”

By midday on Sunday, the article had been removed from the website, which The Sunday Times shares with The Times of London, both owned by Murdoch.

Martin Ivens, the editor of The Sunday Times, apologized via Twitter:

Statement below from the editor regarding today's Kevin Myers article: pic.twitter.com/Tqdk8bhbTw

A separate statement came from Irish Editor of the Sunday Times, Frank Fitzgibbon. He said, “As the editor of the Ireland edition I take full responsibility for this error of judgment. This newspaper abhors anti-Semitism and did not intend to cause offense to Jewish people.”

The newspaper later issued a statement saying Myers had been fired.

A spokesperson said, “We can confirm that Kevin Myers will not write again for The Sunday Times Ireland. A printed apology will appear in next week’s paper.

“The Sunday Times editor Martin Ivens has also apologized personally to Claudia Winkleman and Vanessa Feltz for these unacceptable comments both to Jewish people and to women in the workplace.”