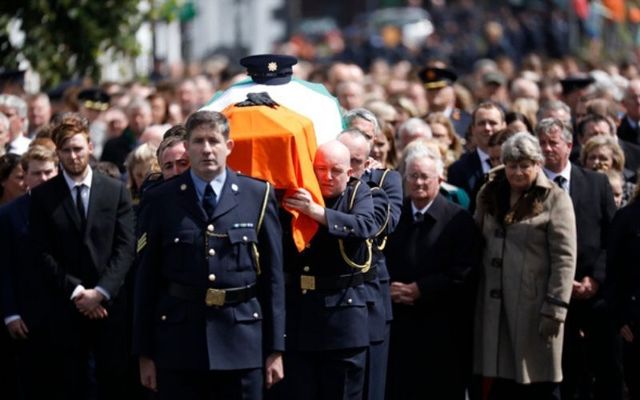 Hundreds of mourners lined the streets of Charlestown, County Mayo on Sunday to pay their respects to Detective Garda Colm Horkan, whose State Funeral took place on Sunday afternoon.

President Higgins signalled the start of the moment's silence by sounding the peace bell at Áras an Uachtaráin.

The Irish flag was also flown at half-mast at the Áras as a further mark of respect to the deceased Garda.

The national flag is being flown at half-mast at Áras an Uachtaráin, as a mark of respect to Det. Garda Horkan.

Horkan's remained were brought through his hometown of Charlestown on Sunday morning and hundreds of local gardaí formed a guard of honor for their fallen colleague. 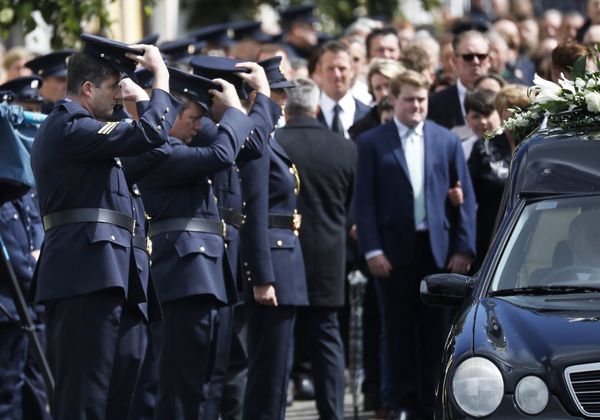 Six gardaí carried his coffin - draped in an Irish flag - into St. James's Church in Charlestown for the funeral service.

A minute's silence was observed before the funeral began in correspondence with the silent memorials taking place all over the country.

The detective's garda notebook was left at the altar near his coffin in addition to his local GAA club's jersey and a Liverpool Football Club pin.

His brother Dermot spoke at the service and explained the significance of each object.

He said that "You'll Never Walk Alone" - Liverpool's anthem and motto - summed his brother up perfectly because "he never let any of his family or friends walk alone."

Monsignor Tommy Johnson, who delivered the funeral sermon, said that Horkan was "deeply loved" and described the detective as "one of nature's gentlemen."

Attendance at the funeral was limited to 25 people due to Ireland's COVID-19 restrictions. However, friends and family were able to watch the service on a large screen at a local GAA ground. RTÉ also broadcast the service for people around the nation to watch and pay their respects.

Horkan, 49, was shot dead with his own firearm in Castlerea, County Roscommon, on Wednesday night after he became involved in a physical altercation with a male suspect. A 43-year-old man has since been charged with his murder.