The corpse of a sperm whale has washed up on the west coast of Ireland. This is the third of its kind to be found ashore this year. 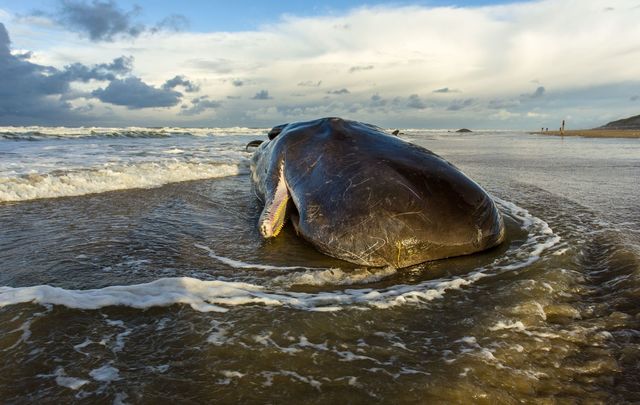 The mammals are usually found deep in the ocean.

The corpse of a sperm whale has washed up on the west coast of Ireland. This is the third of its kind to be found ashore this year.

The mammal, which is 40-foot long, is normally only found deep in the ocean but was spotted twice this week on the Connemara, Co Galway coastline.

The whale was found at Mace Head, Moyrus in Connemara, Co Galway on Sunday. It is reported that it was dead before it reached the shore.

Read more: Why are so many dead whales washing up on Ireland’s beaches?

According to the Irish Whale and Dolphin Group (IWDG), this sperm whale is the same one that was spotted earlier in the week.

“Another sperm whale was washed up yesterday, this time at Mace Head, Moyrus, near Carna in Connemara. It’s most likely the same whale reported floating by commercial fishermen fishing out of Ballyconnelly," a spokesperson told the Irish Mirror.

Read more: Humpback whale “Boomerang” may have found love in the glorious waters of Cork

“The stranding at Mace Head was reported to the IWDG by Seamus MacDonnacha of Cill Chiaráin, and Rónán Ó Conghaile, this 40ft whale is in great condition and well worth taking a trip out to Mace Head to see.

“Three sperm whales washed up this year is a little unusual but nothing sinister, please report any strandings to see if this is the start of something more worrying.”

Have you ever spotted a sperm whale? Let us know in the comments section, below.