South Carolina trash can washes up on County Mayo beach

Keith McGreal made the amazing discovery on Mulranny Beach in Co Mayo and has since corresponded with the City of Myrtle Beach in the US! 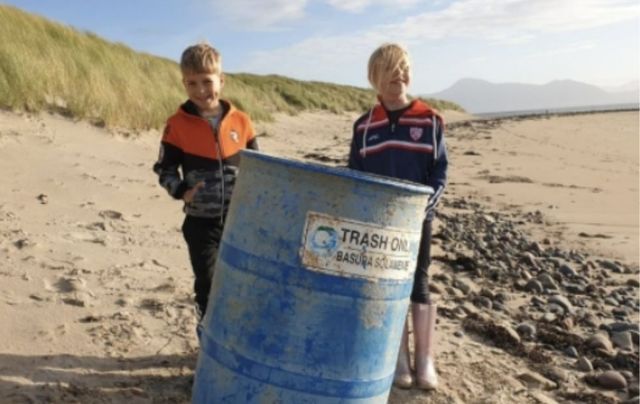 A large oil drum-style trash can, covered in barnacles, traveled some 3,500 miles across the Atlantic Ocean to Ireland from the US.

The unusual discovery was made by Keith McGreal in Mulranny, Co Mayo on Sunday, November 7.

McGreal afterward emailed the City of Myrtle Beach to share his findings:

I wanted to share some images of a Blue Trash barrel that has been washed up on our local beach on the West Coast of Ireland, Mulranny, County Mayo.

We spotted the stickers and thought it would make a good news story.

Amazing to think it travelled all the way across the Atlantic. Over 5500km away."

"Thanks for the email and photos, Keith!

That's an amazing voyage for a trash barrel, although we'd prefer that it stayed put on our beach, rather than gallivanting all over the world via the Gulf Stream.

I don't think it's possible to tell when it went missing, but it probably was during a wind or storm event. We typically remove trash containers from the beach before a hurricane, but this one apparently had a mind of its own.

We've already had a city employee volunteer to come fetch it. (Smile) Thanks again for sharing. Please recycle our wayward traveling can. And, come see us next time you're on this side of the pond. Slán leat!"

Traveling trash can visits Ireland from Myrtle Beach (3,500+ miles)… We received an email yesterday from a man in Ireland who found one of our bins. Click here to read the full email exchange! https://t.co/83mtGAMrUv pic.twitter.com/TgOrtR2fG7

The New York Times spoke with McGreal, 44, a safety and environmental officer. He noted that the writing on the can was in English and Spanish so was not from the locality.

He told the Times, “It was covered in goose barnacles as well... I explained to the kids that if something is in the ocean a while like that, those shells have to grow on the outside of it. It was obviously in the water for a long time, making its way across the sea.”

He added: “It reminded me straight away of maybe like a message in a bottle type scenario, where you know who the sender is and you can maybe return a message back to them."

This spurred him on to mail Mrytle City!