Dublin City Council says that The Shelbourne Hotel could have been in breech of planning permission regulations after it removed the four "slave" girl statues. 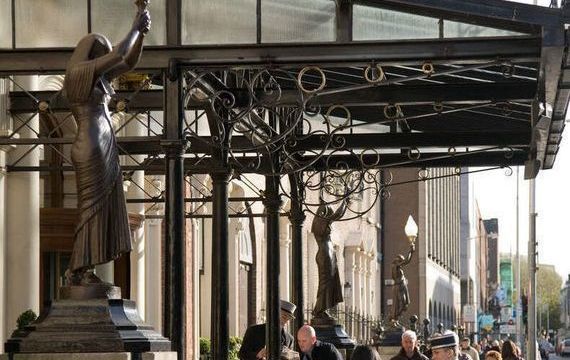 The outside of The Shelbourne Hotel in Dublin before the statues were removed. Tourism Ireland

The Shelbourne Hotel's removal of the four statues has been met with objection by both historians and politicians.

The Shelbourne Hotel in Dublin has received a letter from Dublin City Council after complaints were lodged against the luxury Irish hotel following the removal of four statues from its premises on St. Stephen’s Green.

According to The Independent, the letter from DCC to The Shelbourne says the hotel “is under investigation for breach of the law governing alterations to protected structures.”

The DCC letter that The Shelbourne received accuses the hotel of not seeking “either planning permission or a 'Section 57' declaration that the proposed alterations were minor enough to be exempt from the requirement to seek permission,” according to The Independent.

Should the hotel have sought proper planning permission, the removal of the statues would have likely been put to public debate. The hotel could face fines and a restoration order from the DCC if the matter proceeds to court.

The four statues which have stood outside of The Shelbourne Hotel since 1867 were removed on July 27 after the depiction of women in shackles was called into question.

A picture of one of the statues uploaded to Wikipedia in 2017 by user “Sharonflynn” is accompanied by the caption “Statue of slave girl outside the Shelbourne Hotel in Dublin. There are four external statues at the entrance to the hotel on St Stephen's green - two Nubian princesses and their slave girls, in shackles.”

In light of the Black Lives Matter movement, the hotel faced calls to remove the statues that allegedly showed African women in chains.

Later that same day, a follow-up statement issued to IrishCentral said that the statues had been removed.

After the statues were removed, art historian Kyle Leyden, an associate lecturer at the University of London, told RTE Radio's Drive Time that he located the original catalog that the statues are believed to have been ordered from.

“In that printed catalog, it appears that the man who originally created and sculpted the statues does not actually refer to them as slaves. He did not intend them to be read as slaves,” Leyden said.

“It was clear that the Egyptian statue at least was not in any way to be read as a slave. It was wearing a royal Egyptian headdress, which would indicate it was a princess."

On July 28, The Irish Georgian Society, a nonprofit organization that promotes the protection of Ireland's architectural heritage and decorative arts, said that they were not consulted and the move would have required planning permission as its a protected structure:

Further to reports and in the interests of clarity, the IGS was not consulted about the removal of statues from The Shelbourne Hotel. Such works require planning permission which we believe was not sought. The IGS has contacted DCC Planning urging them to address the matter. pic.twitter.com/2cftDLbffr

On July 29, Independent Senator Michael McDowell shared a video on Twitter in which he expresses his “outrage” over the removal of the statues during a sitting of the Seanad:

Watch: In the #Seanad today I expressed outrage at the removal of statues outside the Shelbourne hotel which is an idiotic and unlawful change to a protected structure https://t.co/ZcrPkJW18x

Later, on August 6, Senator McDowell said in a tweet that he had lodged a complaint with Dublin City Council about the removal of the statues:

I have lodged a complaint with ⁦@DubCityCouncil⁩ Planning Enforcement section calling for the “Shelbourne Four” to be freed and reinstated: Dublin City Council begins action against Shelbourne Hotel for removing statues
via @IrishTimeshttps://t.co/uX6NLNHIEF

Paddy McCartan, a Dublin City Councillor, today told Newstalk: "I think the reference to slavery was erroneous and it was a rushed judgment based on concerns about Black Lives Matter.

"It's very surprising that there has been no response from the hotel to all the queries that have been made about why they have been removed in the first place."

McCartan said he was particularly concerned that the statues were removed in breach of planning permission of a protected structure.

A spokeswoman for Dublin City Council said: "Our planning staff will need to speak with the complainants and consider any submission the hotel may make within the four weeks, and then look at where things stand as regards the law before deciding the next move.”

The Shelbourne Hotel has not responded to a request for comment at the time of publication.