Co Meath man Shane McGeough, who lives in Adelaide, Australia with his partner and their daughter, begins cancer treatment this week for a brain tumor. 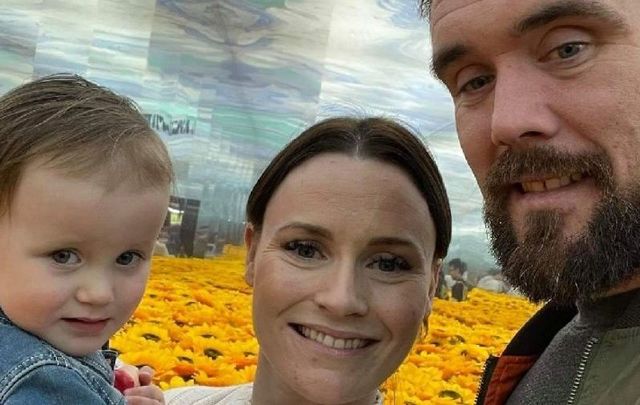 Shane McGeough, his partner Michelle, and their daughter. GoFundMe

Shane McGeough’s family in his native Co Meath are fighting to be at his side as he embarks on treatment for a stage 4 brain tumor in his adopted home of Adelaide in Australia.

McGeough’s cousin at home in Ireland Serena Gavin has launched a GoFundMe to assist McGeough's medical expenses, as well as travel to Australia, whose borders are currently closed due to the pandemic.

On the GoFundMe page, Gavin explains that Shane and his partner Michelle Farrell, both from Kells in Co Meath, left Ireland to travel Australia for a year. 11 years have now passed and the couple has built a life for themselves and their two-year-old daughter in Adelaide.

Recently, however, Shane began to fall ill and he was ultimately diagnosed with a brain tumor, which he will begin treatment for this week.

"Both the McGeough and Farrell families are completely devastated with the news and so we aim to do everything we can to help Shane Michelle and Harlow get through this," Gavin wrote on the GoFundMe page that has so far raised more than €46k.

On Wednesday, Gavin told Claire Byrne on RTE Radio that Shane's mother, Cathy, has been granted a special exemption to travel to Australia to be at her son’s side.

"Overnight, Cathy got word, got an email from the Home Office in Australia to say that her travel exemption has been approved.

“It’s an extra step closer, every time we get one of these little steps it’s great for us. Yesterday morning it was the visa, during the night last night it was the travel exemption, so now it’s on to the flights.

“The only downside to it is that Mary was refused the travel exemption - Mary is Michelle’s mother. So it means that Cathy, at the minute, will probably have to go herself. They’re going to try and follow up with Mary and try and reapply and get Mary to be able to go over as well to be able to help out the family.”

Serena says that Cathy is “very, very nervous” to travel on her own, but her need to be with her son, understandably, outweighs her concerns.

“As far as we’re aware, she will still have to quarantine when she does get to Australia,” Serena said. “There is a problem with quarantine space, so that’s something that we will have to look into as well when we’re looking up flights.

Serena said that she's having difficulty booking a flight for Cathy but is hoping to get Cathy directly into Adelaide for the 14-day quarantine period so that she won’t be far from Shane, Michelle, and their young daughter.

Shane is due to start his six-week radium treatment tomorrow, September 15. “The treatment is quite quick every day, it’s a 15-minute procedure every day of radium, and his chemo is by tablet, so he’s able to take that from home. He’ll be in the hospital five days a week for six weeks.”

While Serena said she and the family are delighted with the “massive response,” she acknowledges that Shane’s situation is “not good.”