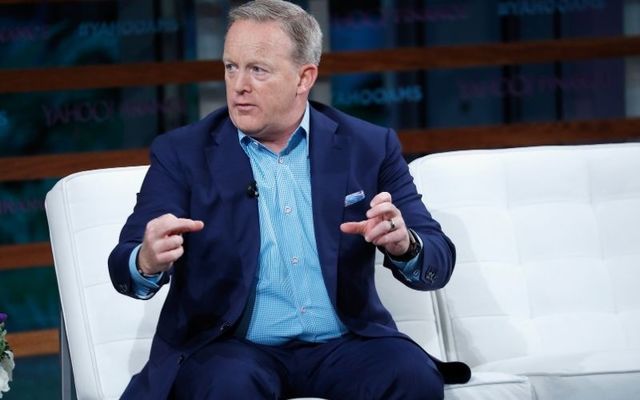 Spicer said that Biden may have reservations about coming into close contact with Trump. Getty

Former White House Press Secretary Sean Spicer believes that President Donald Trump's second debate with Joe Biden will go ahead, but thinks that Biden may have reservations about facing Trump so soon after the President tested positive for COVID-19.

Spicer was speaking to Ryan Tubridy on RTÉ's Late Late Show and said that the upcoming debate in Miami on Friday, Oct. 16, falls just outside Trump's quarantine period.

"Technically it's just outside the window of when you would quarantine, so I think it would go through," Spicer said.

However, he said that Biden, 77, may have reservations about coming into close contact with Trump and members of the President's campaign staff.

Former White House Press Secretary and Communications Director, @seanspicer tells Ryan whether he thinks the next US Presidential debate will take place given that Donald Trump has tested positive for COVID-19.#LateLate pic.twitter.com/6Z3OhJTtE5

Tubridy, who frequently criticized the President over his blasé attitude to COVID-19, asked Spicer whether his positive diagnosis was inevitable.

The former White House Press Secretary said that Trump was tested for the virus every morning and probably felt that he didn't need to wear a mask as a result.

However, he said that the President should have been leading by example.

He said that Trump's attitude toward the virus may change now that he has contracted it himself.

"Once you deal with this disease, or you know someone who has it, your perspective hopefully and probably changes on how you want it dealt with.

I'm interested in the leadership and the example he sets now that he has seen it face-to-face."

Spicer said that the President now had to strike a balance between his work as President and ensuring that he makes a full recovery from the virus ahead of next month's election.

He said that there had been "unwarranted" speculation regarding Trump's successor if his health deteriorated.

"There is a lot of speculation that I think is unwarranted in terms of succession plans, but we have a constitution that lays out all that very clearly."

Spicer also told Tubridy that he believes Trump will win re-election in November's election but conceded that it will be a closer race than in 2016.