St. Patrick’s Day 2016 as celebrated around the world (PHOTOS & VIDEO)

How people around the world celebrated St. Patrick’s Day 2016. 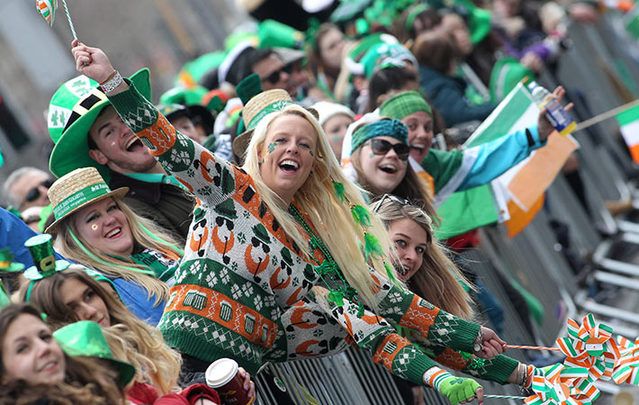 How people around the world celebrated St. Patrick’s Day 2016. Above: Dublin. RollingNews.ie

Editor's Note: Last year, the entire world celebrated St. Patrick's Day in style. With the countdown to St. Patrick's Day 2017 well and truly on, we thought we'd take a look back at the fun and frolic folks had around the world last year. Have you got major plans for this year? Going somewhere exotic? Mail us some photos to editors@irishcentral.com or tag us on Twitter @IrishCentral.

After weeks of parade preparation, reading up on the history of St. Patrick and the day named after him, cooking up special Irish recipes, and brushing up on Irish toasts and sayings for the special day, St. Patrick’s Day has come and gone.

While a few towns and cities around the world will still be holding their St. Patrick’s Day celebrations this weekend, yesterday was the main event, with parades and parties galore, and monuments around the world turning green in honor of Ireland and March 17.

Here’s a look at some of the St. Patrick’s Day celebrations around the world, from New York to Dublin to Sydney.

And if you’re feeling a little worse for the weather (no judgement!), you can read up on our top Irish hangover cures here.

The St. Patrick’s Day parades throughout Ireland, where it’s a national holiday, proved once again that there’s no better place for the craic on March 17th than Ireland.

Just look at these spectacular floats in Dublin!

The Dublin parade was led by the wonderful Joanne O’Riordan, who stars in the documentary No Limbs, No Limits.

Over half a million people thronged the streets to watch the parade, which was especially in tune with this year’s theme, “Imagine if…”

#TakingYouToIreland for the parade in #dublin! A sea of green madness. Shot by @elizabethclloydcanvin#lovedublin #dublin #stpatricksday #stpatricksday2016

Posted by InstaIreland on Thursday, March 17, 2016

In Cork, where the theme of the parade was Ireland’s 1916 Proclamation, the parade was led by a massive reproduction of the proclamation itself as well as people portraying the signatories.

They also had a “Foxy Float” devoted entirely to redheads:

In Galway, they recreated the famous Men at Lunch photo of Irish construction workers in New York:

Hands down the best St. Patrick's Day float we've ever laid eyes on. The top was snapped at the Maigh Cuilinn parade in...

Posted by InstaIreland on Thursday, March 17, 2016

In Ennis, Co. Clare, the parade was led by 97-year-old Patrick Wall – the oldest living Patrick in the county. He was joined by a few more venerable Patricks, pictured here:

Donald Trump also made an appearance at an astounding number of parades throughout Ireland:

Donald Trump takes a break from campaigning to walk in Galway , promises to build a wall to keep Mayo folk out ! pic.twitter.com/Hh2lLXLECg

Had a Donald Trump impersonator in our St. Patrick's Day Parade. Was epic to see him ������ pic.twitter.com/nPulsT1ef7

And in Carrigaholt, there was Ireland's shortest St. Patrick's Day parade:

Ladies and gentlemen.. The moment you have all been waiting for has finally arrived!! The direct result of a long years...

The 5th avenue parade, the oldest in the world, made history today as the first Irish LGBT group marched in the procession:

In addition to St. Patrick’s Day revelers, the streets of New York were full of Irish literature, thanks to the Irish Arts Center’s St. Patrick’s Day book drive, though which 5,000 Irish books were given away.

Sydney’s St. Patrick’s Day parade was sadly canceled this year due to a lack of funding, but the Irish in Australia’s capital still found ways to celebrate:

The #StPatricksDay parade may be cancelled but that won’t stop thousands of Irish celebrating https://t.co/xFF5iryKfp

It was a massive success this year, with close 200 landmarks around the world going green for St. Patrick’s Day. The part most people don’t realize? The cities and countries join in on the fun for free, saving the Tourism Ireland an estimated 20 million euro.

The Coliseum in Rome:

The Great Wall of China:

WOW - how amazing does @NiagaraFalls look all lit up in green #GlobalGreening pic.twitter.com/hjOeExiNty

WOW - how amazing does @NiagaraFalls look all lit up in green #GlobalGreening pic.twitter.com/hjOeExiNty

A bunch of attractions throughout Northern Ireland, including the Giants Causeway:

Check out @CasaLomaToronto - all decked out in green #GlobalGreening pic.twitter.com/irrfE6VZZB

And even the Aisling Irish Center in New York!

Really great that @Aisling_Irish in New York is taking part in our #GlobalGreening this year pic.twitter.com/Ud55Bamkkq

Aer Lingus enlisted the help of Mundy for a really sweet surprise for Dublin Airport:

☘With love on #StPatricksDay ��☘https://t.co/k2BtVjsgyZ

Happy #StPatricksDayGetting into the Irish spirit