Savita Halappanavar died on October 28, 2012, at Galway University Hospital after developing sepsis while experiencing a miscarriage. 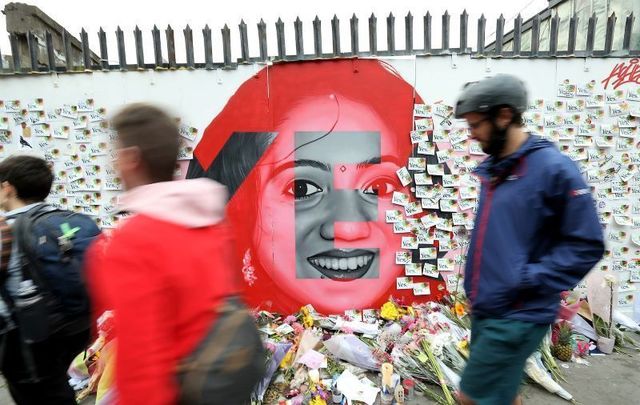 May 26, 2018: The mural of Savita Halappanavar by artist Aches on a white wall on Richmond Street South in Dublin city, on the eve of the Eighth Amendment referendum. As people began voting from early on Friday morning, flowers were left at the bottom of the mural, along with ‘Yes’ leaflets, pens, and sellotape so that people could leave notes. RollingNews.ie

Indian woman Savita Halappanavar died on October 28, 2012, at Galway University Hospital after suffering a septic miscarriage for which she was denied an abortion.

Savita Halappanavar was just 31 years old when she died, but her death helped give way to major reform in Irish abortion law.

Today, October 28, 2020, eight years on from her death, Savita is being remembered across social media, with many people lighting a candle in her memory:

Honouring the memory of a young woman who died tragically because she was refused an abortion in an Irish hospital.

Eight years ago today, Savita Halappanavar, 31, was admitted to hospital in Ireland. She was miscarrying her baby and asked for an abortion. Staff refused. Days later, she died from an infection. RIP Savita. Solidarity with women around the world denied safe and legal abortion. pic.twitter.com/A1y0RDmwWV

Today, on the eighth anniversary of her death, and every day, we remember Savita #NeverForgotten #NeverAgain

Join us at 7.30pm as we light a candle in her memory pic.twitter.com/tTUCDW63qM

8 years today since the death of Savita Halappanavar.

Took this photo on the night the Irish public voted to repeal the eight amendment in 2018. pic.twitter.com/JDvZCBx6no

Thinking of Savita today on the 8th anniversary of her death pic.twitter.com/e9hpLXQF42

Savita, a dentist, and her husband Praveen, an engineer, who are both natives of India, were living and working in Co Galway at the time of her tragic death in October 2012.

A postmortem found the cause of Savita’s death to be “Fulminant septic shock from E. coli bacteremia; Ascending genital tract sepsis; Miscarriage at 17 weeks gestation associated with chorioamnionitis.”

The legislation was ultimately passed in the Dail Eireann on December 5, 2018, and on December 20, 2018, it was signed into law by President Michael D. Higgins.